General Which way do you swing?

Just been rewatching the mini series "The Pacific" and having watched "Band of Brothers" at least 6 times that i can remember, was wondering if other Warrior fans have watched these two great mini series and which one they prefer.
And for Dave, whats the link between "Band of Brothers" and Queen?
....hell it is the off season after all. 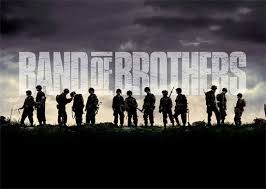 Actually 2 million credits to who ever can tell me what the link between Band of Brothers and Queen is.

Band Of Brothers by a long way ...

The Pacific was a dissapointment.

I to prefer BoB by someways but i wouldn't say i was disappointed with the Pacific it was just such a hard act for it to follow.

Yeap well done. Did you know that or need to research it?

Band of Brothers for sure. Pacific wasnt so great.

band of brothers was more of a classic story of fearless american soldiers where the pacific had a bigger focus on the psychological effects of war on the men. Id say band of brothers only because the whole episode of the pacific focusing on melbourne sucked.

And 2 million credits the richer for it.

band of brothers was better. the pacific was good in places but too much of it seemed like it was done just purely so a mainstream tv audience would watch it. band of brothers on the other hand left you with no doubt about what it was about.

Band of Brothers by far, the characters were just better and the scenery changed every few episodes. The episodes in the forest were epic.

I lost interest in the characters in the Pacific and it's now on my list of 'must watch at some stage later on' programs along with Heroes and a few other series.
Show hidden low quality content
Share:
Share

General Which browser do you use?
2

General What Do You Drive?
2

General What do you collect?