After 15 games all that separates the Warriors and Titans on the NRL Telstra Premiership ladder is 11 differential points, suggesting Saturday's clash between them in Auckland could be a thriller.

Last week the Warriors went within a whisker of becoming the first team to beat the Sharks since Round 3, eventually suffering a heart-breaking 19-18 loss seven minutes into golden point.

For Round 17 coach Andrew McFadden has dropped Jonathan Wright after including the veteran as a late call-up last week, with Tuimoala Lolohea assuming his spot on the right wing.

David Fusitua remains at fullback, while Nathaniel Roache returns to the bench after playing for the Junior Warriors last week.

The Titans also fell short last week, going down 30-22 to Canberra at home and lamenting a key error, which saw them concede an 85-metre intercept instead of scoring a try themselves midway through the second half.

Co-captain William Zillman returns at fullback after time off with a foot injury, which sees Josh Hoffman move back to left centre.

The match will be Simon Mannering’s 250th game for the Warriors, with fans able to join in on the celebrations by grabbing a free giant Simon Mannering head at the gates.

Watch out Warriors: Flat patches continue to be an issue in close encounters for the Warriors, and against the Sharks last Saturday night it cost them the chance to go into half-time with momentum and the lead. In the 10 minutes either side of the break the Warriors leaked 18 points, which was enough to get Cronulla to golden point, and eventually to victory via a field goal.

The Titans may have left the field without the two points last week, but there was plenty about their performance which should worry their upcoming opponents. The Gold Coast completed at 85 per cent and made only five errors all game, the type of stats which usually belong to the team on the winning side of the scoreboard.

Watch out Titans: The Titans average the third most missed tackles in the competition right now, with 32 per game. This week they face a Warriors side who thrive off loose tackling technique from their opponents, and last week it was taking advantage of missed tackles which allowed them to score a couple of crucial tries against Cronulla.

The Warriors footed it with the NRL's best team for 87 minutes in Round 16, suggesting their mid-year form revival has some substance behind it. The Kiwi outfit completed the same numbers of sets as the Sharks and ran for more metres, and will be tough to beat any time they bring that level of play.

Key match-up: Ben Matulino v Ryan James. The two front-row leaders of their respective teams, and even though James will start while Matulino comes off the bench, this clash will go a long way to deciding which team wins the middle. James leads the way statistically, averaging 38 tackles, 16.8 runs and 132.7 metres per match. Despite not starting most weeks, Matulino is averaging 28 tackles, 14.3 runs and 122 metres and is the most consistent bookend the Warriors have.

The history: Played 18; Warriors 11, Titans 7. The Titans tasted victory in one of their two head-to-head clashes with the Warriors last year, but that was the first time they had beaten the Kiwi side since 2010. Games between these two tend to be high scoring, with the last seven all having 40 or more combined points scored.

What are the odds: The Warriors are rock solid in betting, with Sportsbet reporting twice the money invested on the home side compared to the Titans. Punters willing to back the Gold Coast are doing so via handicap betting, where the Titans are receiving a handy start. Latest odds at Sportsbet.com.au.

How we see it: This is a key fixture for both teams as they step up their bids for a top eight finish, and it should be a closely-fought encounter headlined by a brutal battle in the middle between two quality forward packs. The Kiwi side are in the better form right now though, and should get the job done on Saturday. Warriors by eight.

Pumped for this, the boys should/will get up for Mannering tonight

Perfect weather for Rugby League in Auckland today will be a good afternoon, I cant wait to get down to Mt Smart.
Hopefully today we get to see
: Warriors put 50 points on the Titans,
: Simon to score some tries in his 250th game,
: Someone beat Greg Bird up.

Go the Warriors!
Reactions: bruce, mt.wellington, MurrayTD and 2 others

Not confident of a big win today but we so need the win. Maybe a Janfin special? I can't see it being by anymore than 6
Reactions: Rick O'Shay and Sup42

Ash Taylor is already ruled out for the Titans isn't he?

Gold Coast have suffered a double injury blow ahead of their NRL match against the Warriors in Auckland on Saturday with halfback Ashley Taylor and co-captain Nathan Friend ruled out. 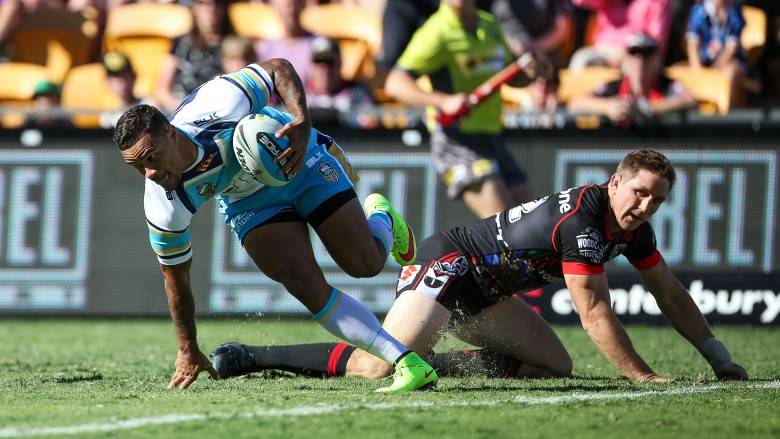 Taylor picked up a groin injury earlier in the week at training and didn't make the trip across the Tasman, with fellow youngster Cameron Cullen coming into the team in his place.

Friend also didn't travel to New Zealand after picking up a hand injury in Sunday's loss to Canberra.
Reactions: mt.wellington

We need to be weary of the semi depleted Titans, ex Warriors always seem to grow a leg playing against us. If we come out committed and respect opposition potential we should blow the Titans of the park. 20 plus for me
Reactions: STEEDEN and Sup42

Good to see we had a clause in Friends contract as well..
Reactions: letsgonewarriors, Matulino's Left Shoulder, brightman and 1 other person

Contributor
I'm worried about Ryan James and Agnatius Paasi. That is all. If we contain those two and limit their metres we win easy.
Reactions: Matulino's Left Shoulder, Sup42 and eudebrito

Inruin said:
I'm worried about Ryan James and Agnatius Paasi. That is all. If we contain those two and limit their metres we win easy.
Click to expand...

Not sure it's that simple with the Titans tbh- they don't really rely on individuals, they're a team who really play for each other.
Our boys are gonna have to go in with that same mind set because if they're relying on superior talent to get the job done they're likely to get their pants pulled down.
Reactions: Sup42 and Akkerz

Defence Said, the Titans success this season has come off a pretty happy in-house player culture since club Legend Freindy returned and some of their enthusiastic young boys e.g Paasi have had such good attitude off the field.

They play for each other.

The Warriors are claiming after a players meeting that they do as well.

We will see if they have the resolve of hard work or the attention of a goldfish in this game.

The Tits will fancy their chances.

Hopefully they play for Mannering....yeah Nelson....yeah play to overcome your own demons boys.

Two fifty games is a silly number anyway, they should celebrate when Mannering surpasses Jones number.....then celebrate in hundreds only.

Contributor
I expecting nothing less than a win today. With it being Mannering 250th game there shouldn't be anymore motivation for a win than that.
Reactions: Nahz

I think we'll win but not by much. Pretty hard game last week and it will have taken a good recovery to be fully firing.
Janfin special for me.
FTS: Lolohea
MoM: Mannering (to make up for Nelson)

Juniors ahead 10-6 at Halftime

Rin the binck O'Shay said:
Juniors ahead 10-6 at Halftime
Click to expand...

With two In the bin
Reactions: Rick O'Shay

Defence said:
Not sure it's that simple with the Titans tbh- they don't really rely on individuals, they're a team who really play for each other.
Our boys are gonna have to go in with that same mind set because if they're relying on superior talent to get the job done they're likely to get their pants pulled down.
Click to expand...

not saying they rely on individuals. saying those two appear to be their biggest go forward players and if we can target them and limit their output makes it very hard for the rest of the Titans team to do their thing.
Reactions: Defence
Show hidden low quality content