Warriors vs Cowboys Gameday Chatter [Round 5, 2020]

The Warriors "host" North Queensland on the Central Coast after falling to earth with a thud last round.

Having earned praise for their 18-0 shutout of St George Illawarra a week earlier, the New Zealand club failed to trouble the scorers in a 26-point loss to Penrith last Friday.

The Cowboys were also given a reality check of sorts, producing an error-riddled display in a defeat to Cronulla after thrashing the Titans in round three.

Warriors: Peta Hiku will start at centre for Hayze Perham with Agnatius Paasi dropping out of the reserves list on Thursday. Lachlan Burr replaces Isaiah Papali'i in the starting pack in the Warriors' other change. The Warriors have won only two of their past 13 games against the Cowboys in Australia.

Cowboys: The Cowboys announced on Thursday that Jason Taumalolo would be part of the team to face the Warriors. The Tonga representative missed round four due to bone bruising on his knee. Ben Hampton, Jake Granville and John Asiata are out, with Hamiso Tabuai-Fidow debuting on the wing, Reece Robson at hooker, Coen Hess in the second row and Gavin Cooper moving to the bench. Reuben Cotter joins the interchange. Corey Jensen and Peter Hola were omitted from the extended squad 24 hours before kick-off. Cowboys winger Kyle Feldt has scored nine tries in six games against the Warriors.

It's always exciting when two top-line fullbacks clash, and we're in for a treat with Roger Tuivasa-Sheck up against Valentine Holmes. Warriors captain Roger Tuivasa-Sheck is a model of consistency, while Holmes has shown glimpses of his brilliant best upon returning to the NRL. 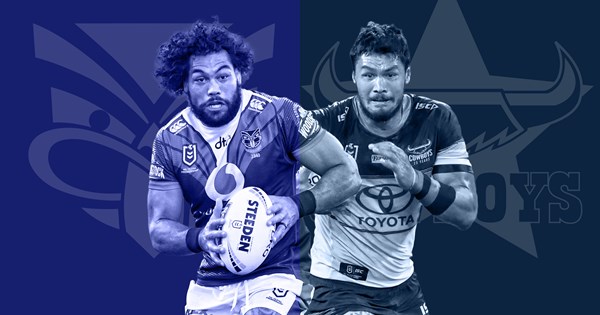 Preview for the round five clash between the Warriors and Cowboys.

I’ve gone the Panthers 13+... can see them putting on 26 points against our defence. Can’t see us scoring much.

Got a good feeling I’m going to be right

Reactions: Hazman, Worried2Death, defensivebomb and 6 others

wizards rage said:
I’ve gone the Panthers 13+... can see them putting on 26 points against our defence. Can’t see us scoring much.

Got a good feeling I’m going to be right

Based on your post, I’m going to go to the TAB and pick a 26-0 score line.
Reactions: Off The Bench, Tonbridge (Swanley), Billy Teets James and 9 others

Contributor
this could be a season defining game..........for Fonzie
Reactions: Off The Bench, Waiting For Premiership and Tragic

The cowboys 13 doesnt look that scary and we know what we can dish up. Be 0-0 for the first 20 JT to come on and make the difference and they go ahead before halftime then run away with it in the 2nd half.
Reactions: YeahNah 4020

The Cowboys are a top ten side and we are not... Cowboys by 13+
Reactions: Hazman, Dave Brough, Waiting For Premiership and 1 other person

Contributor
I'm going the Warriors. The Cowboys starting halves and hooker have only played 51 1st grade games between them.

We are the worst point scoring team in the comp by miles. The Cowboys average just under 25 points a game compared to our 6, so we are going to have to do better in attack. A lot better .

Oh and Blair vs McGuire who's going to give away the dumbest penalty?
Reactions: Off The Bench, Billy Teets James and Worried2Death

I hope the forwards can score some points, because I can’t see that backline likely to score anything...
Reactions: Mr Frank White, CHURCUZ, Worried2Death and 1 other person

Let's get this shit show over with so we can all get on with the weekend.
Reactions: nakiproud, Hazman, roadrunner and 11 others

Reactions: Off The Bench, Billy Teets James, CHURCUZ and 5 others

Worse bit about this game..... after them finally deciding what the bug was causing the abdominal pain throughout the last couple of weeks and the right meds, I'm no longer have any pain........... until 8.00pm tonight.

Think., for my own mental health, I'll miss the game and limit my time on the forum next week. I get the feeling tonight is going to get very ugly. Oh, and if I was Toovey, I'd expect a phone call sometime early next week from Penrose.
Reactions: Defence, Tedster, Hazman and 8 others

And why, oh why, are the mods making us relive the pain from last weekend again?/\/\/\/\

Lol should call out that when I recorded on Tuesday the info was that Taumololo was probably not playing, so I'm much less confident today than I was then. Raining up in Gosford too which doesn't help us, we like a dry track. Still winnable.
Reactions: Off The Bench, pbrown01123, BippidyDooDah and 4 others

What’s that saying about doing the same over and over and expecting different results?

I think it’s some sort of cryptic message from the mods.
Reactions: Off The Bench, Raw Power and Fonzie

Fonzie said:
Lol should call out that when I recorded on Tuesday the info was that Taumololo was probably not playing, so I'm much less confident today than I was then. Raining up in Gosford too which doesn't help us, we like a dry track. Still winnable.
Click to expand...

Don't think it matters what sort of track it is. We couldn't score if we were the last dick on Earth.
Reactions: Off The Bench, Defence, roadrunner and 6 others

Or should all the poll options be Cowboys 13+?
Reactions: Hazman, Tragic, Dave Brough and 3 others

Even if the unlikely / underachiever sides get it together at the start of the game and pile on some points (it would be astounding with us and point scoring)
... as the game progresses they get found out
... hence The Bronc's V Manly last night

The heartbreaks are starting at 6pm here in Aus ... take it easy on your selves!

Mind you I collected a hundred to one horse the other week, so... Nah!
Reactions: Off The Bench, Defence and CHURCUZ

Contributor
The Cowboys finished one spot lower than us last year

should be could be

JaggedJ said:
Don't think it matters what sort of track it is. We couldn't score if we were the last dick on Earth.
Click to expand...

Can our backs score a try that is isn’t off a kick or intercept???

that is the question for today
Show hidden low quality content