Thread for all miscellaneous jerseys and merchandise before 2012.

I am in the midst of designing a sports bar for my home and would like it to be Warriors themed and have the full history of the club around the walls. (I have been thinking of getting a mate to paint the jerseys on the wall with a large front view and a small back view with one players name and number from each year on the back view).

I want to have all jerseys from each year (home, away, heritage, special, testimonial, etc) and a photo framed up with a legendary moment from the year of the jersey as well as a complete team list.

I will start posting photos of the jerseys with the year, but I don't have all of the info needed, so if anyone can help, it would be much appreciated.

Let me know if I have made a mistake, missed something or any other info that should be added.

Edit:
Also, if anyone can find and post a high resolution photo of any legendary moments which I could turn into a framed picture (such as the team running out in game one 1995, Stacy scoring in the 2002 GF, Faumuina's basketball pass to Evarn Tuimavave against the Broncos, etc), it would be greatly appreciated.
Last edited by a moderator: Mar 19, 2019
Reactions: Boogeyman

heritage jersey (2005)
- the 1995 replica jersey. Unable to find a picture of it. Can only find the original and the later one.

special jersey (unsure of year, but I think it came from somewhere in this range.)

2013 (unreleased - unsure whether will be home, away, or special) 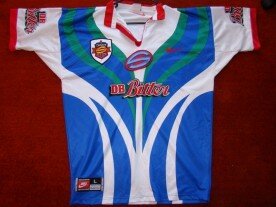 I own this players jersey and posted it up on that old jersey website hahaha. Number 30 Te Rangi. He never actually played top grade. Only the development team I think.

I can definately help you here mate. Would be nice if we can name the year, home, away, etc and have them all put in chronological order by our fair admins?

Definately must a picture of the back and the sleeves so we van verify the year. If your not sure just post it. Someone will know. 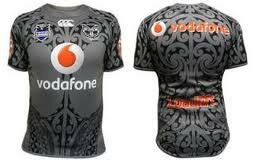 The top jersey was the Heritage jersey and the bottom the special Anniversary jersey.

Top jersey is a replica of the Awen Guttenbiel Testimonial jersey that celebrated his career with the Warriors and his Tongan/Maori heritage. One of the rarest jerseys ever with only 25 ever made by Puma. Actual photo of a signed one going for $1500 on Trademe right now! The bottom jersey was the 15th year Anniversary jersey celebrating 15 years since the Warriors entered the ARL/NRL. 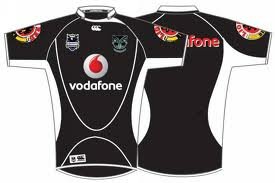 These 2 jerseys are from 2009. You can tell by the Lion Red Beer logo on the sleeve.

2010 has Lion Red League on the sleeve with sponsors Loadlift on the bottom of the back.

2011 has Lion Red League on the sleeve with sponsor Skycity on the bottom of the back. 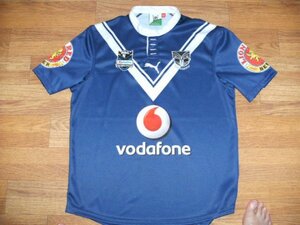 One of my favourite issues, this jersey was actually made to mark 30 years since the Auckland team of 1977 beat Australia, Great Britain and France all in the space of just 20 days at Carlaw Park! One of the very reasons my father almost cried when they pulled the old girl down because he attended all 3 games and recalls them with great pride, passion and emotion. Great story with some real legendary names from some of NZs great league families. This from a website I found...

The lights were on at Carlaw Park and the place was buzzing as Auckland prepared to take on France.

The French, along with Australia and Great Britain, had been in New Zealand for what was then called the international championship (effectively a World Cup).

It wasn't such a golden time for the Kiwis. They lost 12-27 to Australia in Auckland and 12-30 to Great Britain in Christchurch before sneaking past France 28-20 in Auckland on the back of Chris Jordan's 20 points from a try and eight goals.

After each international, the touring teams then faced the dreaded prospect days later of taking on the vaunted Auckland side which, in that era, was such a force against visiting teams. And those sides had no liking for playing at Carlaw Park either.

Former Kiwi Bill Sorensen was the coach then and, with a band of brilliant players, he did what the Kiwis couldn't do - guiding Auckland to wins over each of the major rugby league nations, all in the space of 20 days.

The Australians were the first victims, beaten 19-15 on June 1.

Mark Graham, curiously unwanted by the Kiwi selectors days before, was stupendous while Warren Winter, Lyndsay Proctor, Olsen Filipaina, Gary Kemble and Dennis Williams were all stand-outs as well, Williams scoring a superb try in the second half.

On June 14, Sorensen's men were back in business against Great Britain, putting on another breathtaking performance in total contrast to the Kiwis' effort days earlier.

On that night the outstanding fullback Kemble had one of the finest matches of his career, making a thrilling 50-metre break to put Jordan in for a try. The Aucklanders went on to win 14-10.

Included in the Great Britain side were the likes of Jimmy Thompson, Sammy Lloyd, Len Casey, Ken Gill, Steve Nash and George Fairbairn.

And, so, to June 21 - Auckland looking for a place in the history books.

And it delivered, beating the French 17-0 on a cold and wet night with a side down on power through injuries. Dane O'Hara, Dave Sorensen and Williams scored Auckland's tries.

Other players who figured in the campaign included a young Kurt Sorensen, John Smith (one of the most under-rated players in the game), Fred Ah Kuoi and Alan McCarthy.

SQUAD:
The full squad used in the 1977 grand slam was:

Of the 19 players in the squad, 14 were former, current or future Kiwis:

This is one we should have stuck with it says every thing we are warriors we are from NZ and it has our first club colours
Click to expand...

anyone got a picture of the mt albert tribute jersey they wore
Reactions: Warrioz

bigstu said:
anyone got a picture of the mt albert tribute jersey they wore
Click to expand...

Must be hard to have pride 'in the jersey' when the bloody thing changes in colours every few years.. Also must be harder to have pride when you are forced to play in a terminator style jersey!!! Poor juniors will be the laughing stock of the u20 comp running out in those things!!
Reactions: eamon and koolkat
Show hidden low quality content
You must log in or register to reply here.
Share:
Facebook WhatsApp Email Link