We may not have got the wooden spoon but we are definitely the worst team currently on form by a long way. Every team would put 50 on us. Recruitment is our only positive for the year. Defence was terrible to nonexistent in the end. Attack started ok and again is not there. Im scared the team will slip back next year into this mode now which is white flag give up and that includes the easy way out pulling shoulder charges to get banned a few games. Seeing other sides battling despite their injuries shows how poor our side is. By the end of this round we will have the worst for and against. Never wanted a season to end so bad
Last edited: Sep 5, 2015
Reactions: Off The Bench

2 for me- just a total disaster

Defence said:
2 for me- just a total disaster
Click to expand...

What are your two for? Showing up lol???
Reactions: Defence

mt.wellington said:
What are your two for? Showing up lol???
Click to expand...

One point for avoiding the spoon and another point for.....
Actually I change my vote to a 1 haha
Reactions: the borg, Freddie Futler, eX | Machina and 5 others

The only positives from this year I see, Was the emergence of new talent in a definite order,
Vete
Gubb
Lolohea
Lino, Lisone
Maumalo even though he was played out of position, RFM,Kata
All got a taste of first grade an now can work towards that level
Hopefully next season we are not relying so heavily on these
players
to whoever gave us a ten this year can I come an watch the games next season at yours
Cause we sucked arse on my television ,
Last edited: Sep 5, 2015
Reactions: Lousi-InBed and adelaide rams

I went with a 3. They were in the top 4 for a bit but injuries happened. Even so this has been one of the limpest ends to a season ever. Even at full strength this is a common occurrence, not normally to this magnitude though. Terrible but could have been a worse season. They could have lost to the Sharks and Storm and taken the Spoon.

Only 3 positives this season.

I'm so over this season I'd give it a "I can't even be arsed to rate it rating."
Reactions: FAN and BeastMode

Gave it a 5.
1 point for sacking Nielson Mateo and Bukuya.
1 point for Roger Tuivasa-Sheck.
1 point for Luke.
1 point for sacking 11-14 part time players on full time wages and sacking Bell.
1 point for making us conpetitive for 16 weeks despite having 4 rookies a week playing and a new winger playing every game. We had horror injuries and had a shot.
Minus 5 points for the slow start to the season and the limp displays at home against the Broncos. Titans. Roosters. Manly. Sharks. Dragons. 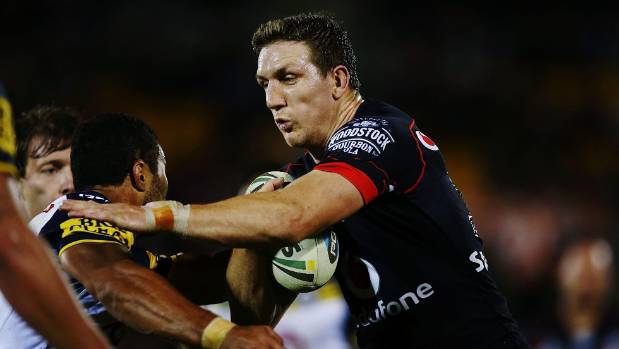 The New Zealand Warriors will embark on a complete review of what's happened this season, with boss Jim Doyle calling on everyone to be open and frank.

Doyle admits the results this season, particularly the past seven weeks, have been unacceptable and every single member of the playing roster and off-field staff will get their chance to have a say.

And Doyle says to take the club forward it's vital that people don't hold back.

"It's critical that when we do reviews and get feedback from all areas of the business, that we have a good honest discussion, so that we can improve," Doyle said.

"That's really important because this year's performances aren't acceptable and we've got to make sure we don't put ourselves in the same position again.

"From a club point of view, we'll do a complete season review and look at everything we've done across the whole organisation. We'll look at what needs to improve and how we do that."

Doyle says they will examine the players' statistics for the season and continue to bolster their roster for next year.

"We're in the market right now to recruit in people in regards to recruitment and development, as well as physios and strength and conditioning.

"So we'll finalise all of that and then put together our budget and plans for next year."

The players will be the first to have reviews and each one will be given instructions on what they need to do over the off-season to keep themselves in good shape.

The first batch of players for the Kiwis tour to England will be named early this week, with players whose clubs didn't make the top eight being announced.

Those players will be given a three-week break before they start training again and it's possible that only Simon Mannering and Ben Matulino will make it from the Warriors.

Despite the disappointment, the players will still have a Mad Monday, although Mannering says it will be a low-key affair.

"We'll have a get together, I don't think it will be too mad," the Warriors skipper said.

"It'll be quiet, you do need to have a get together, so you're all with each other for the final time as a team and then have a rest."

The player who has been most openly critical of what's happened at the end of the season has been Ryan Hoffman. He was used to much higher standards of player accountability and professionalism at the Storm and wanted to see the same at his new club.

"Certainly it's not a stab at individuals and we're all encompassing as a team," Hoffman said of his comments.

"Everyone's on the boat here and we all contribute to a win or a loss.

"It's an honest assessment of where we need to get to as a club.

"I know all of the players recognise that as well and being honest is just a part of us becoming the team we should be."

The Warriors recently announced that they are looking at a mentor for Andrew McFadden next year. It's something that John Hart did with Ivan Cleary when he was at the club.

However, the former All Blacks coach says he not looking at making a return.

"They've got a very good combination and they'll work out what they need in due course, but the club is in pretty good hands.

"It's obviously been a difficult ride over the last seven weeks and there have been a combination of factors, injuries and losing top players and a lot of young players being exposed. But I've got a lot of confidence in what they've got and I'm sure they'll bring it right."

Hoffman - "We're all encompassing as a team. It's an honest assessment of where we need to get to as a club"

Matulino's Left Shoulder said:
Hoffman - "We're all encompassing as a team. It's an honest assessment of where we need to get to as a club"

He's only talking about Mad Monday because some fuckwit has asked him about it
Reactions: Warrior482 and mt.wellington

4 out of 10, can't help the injuries, has exposed the depth for what it is though.

mt.wellington said:
The New Zealand Warriors will embark on a complete review of what's happened this season, with boss Jim Doyle calling on everyone to be open and frank.
Click to expand...

Just quietly, I'm not sure they're capable of that. I think the few players who haven't been utter shit this season are scared of offending their team-mates with an honest assessment of their shortcomings. And as for guys like Hurrell being able to have a hard look at themselves? Too fucking stupid to manage that. Anything said by the likes of him will be nothing but lip-service. I'm sick of the brand of retardball that clowns like him are serving up to us.

My only argument with the list of players leaving this season is that it isn't long enough. Not yet, anyway; I'm hoping it'll grow, cos life's too damned short to put up with this shit for much longer.
Reactions: koolkat and Off The Bench

How many times have they said this? - leave not stone unturned in our full end of year review?

fat lot of good the last four have been.
Reactions: Matulino's Left Shoulder

BeastMode said:
How many times have they said this? - leave not stone unturned in our full end of year review?

fat lot of good the last four have been.
Click to expand...

I'd be a lot happier if they said "no stone unthrown".
Reactions: BeastMode

I rated this season a three. Two of those points were for recruiting Luke and Roger Tuivasa-Sheck. The other point was for being in the top 4 for one week.

What a fucking disaster 2015 had been, and yet, we could potentially finish only 2 points out of the 8 with a win today.

Raurimu Massive said:
Just quietly, I'm not sure they're capable of that. I think the few players who haven't been utter shit this season are scared of offending their team-mates with an honest assessment of their shortcomings.
Click to expand...

Reviews arent worth a tin of shit if the info garnered isnt addressed honestly and competently. If Doyle does this then surely the coaching group will get touched up. Senior players group rejigged and a new captain appointed. Fucktard players put on notice for the whole of the year Hurrell main culprit (social media, tv and radio bans). Decide on 2 jerseys and stick with them no matter 1 main and 1 if we clash with other teams. Big Bopper Angry prop, Tall fast skilled centre, a half that can kick 4 fks sake oh and off season implementation of any drug taking to harden these bastards up.
Reactions: Freddie Futler and BeastMode

Held back a vent for too long, I'll keep this as short as I can... Why does he need to though? Its been the same shit and every year you hear the same "fittest team ever" and "the last regime were slack, big changes and now we are all on board". How do these people turn up and not put in, frankly I see to many people pissing around too often. Too many sooks, whinging about playing NSW cup and being hard done by. You fucken earn first grade and then you earn to keep it. Every minute of every day. Every meal you eat, every beer you drink, every weight you lift, every metre you run, every second of film footage you watch. It ALL counts. Some of these players are selfish and do not do their job. As an old coach of mine once said "If you wont put in for each other and enjoy each others success, then fuck off and play tennis".
Last edited: Sep 7, 2015
Toggle signature
This is what the Warriors can do!
Reactions: stacky18, OMG, DANZ and 6 others
Show hidden low quality content