fanrrior said:
How did Wairangi's brother go?
Click to expand...

TBH I thought he was the only player who showed abit of promise. Goes hard and isnt scared to get in there and tackle some of the bigger boys. I liked him...[DOUBLEPOST=1363108321,1363094799][/DOUBLEPOST]Big shuffle for Vodafone Junior Warriors

Playing the curtain-raiser to the NRL team’s ED3N – RISE WITH US contest, the Vodafone Junior Warriors could feature five players making their NYC debuts and another four making just their second appearances after being initiated in last weekend’s unexpected 8-46 loss to Parramatta.

The newcomers in the starting line-up are Lafu Feagaiga in the centres and Vince Afoa in the front row while dynamic ex-rugby union schoolboy star Abraham Papalii, back rower Stedman Lefau and winger Esera Esera are on a six-man bench.

The starting front rowers have changed with Afoa joined by Sam Lisone (used off the bench at Parramatta Stadium) and Newbigging moving up from the bench.

The four players who appeared last week but are not being used against the Roosters are Sione Feao, props James Taylor and Tama Koopu and second rower Kouma Samson.

“We had a disappointing day against the Eels but at this stage of the season it’s also important to have a look at different players in the squad to ensure they have an early experience of the competition,” said Vodafone Junior Warriors head coach John Ackland.

“We also need to try some players in other roles so we have a sense of their ability to cover other positions.”

In the Roosters they face a side coming off a 26-24 win against South Sydney.

There were no redeeming features in the Vodafone Junior Warriors’ performance last week, aside from captain David Bhana’s heroic defensive effort in making a mammoth 52 tackles. He has started the new campaign where he finished in 2012 as the competition’s top tackler.

When they last met, the Roosters knocked the Vodafone Junior Warriors out of the finals last September.

Papalii is a monster.
Perhaps the best forward prospect we have had.
Reactions: Samwitwiki

Ref said:
Papalii is a monster.
Perhaps the best forward prospect we have had.
Click to expand...

I can't find much on him. Physical stats??

Hitman82 said:
I can't find much on him. Physical stats??
Click to expand...

That's. Solid. Cheers. About time we produced a forward who carries a good amount of bulk without having to be lofty as. Your namesake was the last good one we had! My favourite player during his time with us. Noone charged the line quite like the mighty Feka.
Reactions: Defence

Hitman82 said:
That's. Solid. Cheers. About time we produced a forward who carries a good amount of bulk without having to be lofty as. Your namesake was the last good one we had! My favourite player during his time with us. Noone charged the line quite like the mighty Feka.
Click to expand...

Thats all you can ask! "Paleaasina running like he has a rocket up his jacksy" is one of my favourite commentating moments. He carries the 115kgs well which is important.
Reactions: Raurimu Massive and Hitman82

Geez, I can't remember an U20's side that I've recognised less. There's usually so much overlap from the year before with guys hanging round for 2-3 years, but that crop is fresh faced. Oh well, I don't mind that. More debuts means more talent on show. The U20's for me should be a talent-spotting source, a 'screening tool' if you know what I mean, once the talent is identified and they're dominating at that level then they should be playing football in the Vulcans. I get no joy in seeing guys that the club has identified as future prospects, sitting in the U20's for seasons on end. They just stagnate, while they still have to negotiate the jump up to big-boy level. Better to have them make that jump early on.
Reactions: Raurimu Massive

The performance by the forward pack was soft, they got embarrassed by the Eels no other words for it. If a big crowd of family at Eden park tonight wont motivate them, then I suspect there are not many future first graders in this side.

is this the same team as last week? the warriors players look a lot bigger this week

edit: nvm, its just a few of the forwards like havili who did a few sets in a row when i turned it on.

wtf is this challenge shit. slowing down a fast game, speed of league is what makes it entertaining. bad idea imo

.. looks like the juniors cant tackle or catch either

Play the balls seem to be an issue for them as well... 3 in the first few minutes they coughed up...

Vete looks promising, a big guy that gets around the park well, and seems to do the little things throughout the game, which is always a good sign for the future.

that under 20s rooster player playing 3 looked pretty good, we should poach him

Yeah Eko Malu hasnt performed the last couple weeks, I think its time to give Sam Cook a go at the 6


Feagaiga is only 17 years old ...coming off what looks like a knee recon, first game in 20s so a bit harsh there

Lolohea again is only 17 too, he got man of the match in national 17s final and also got MVP and the rugby sevens school comp.
He isnt a winger, but they must be trying to bring him into the game.
Reactions: ramraider78 and Sexymonkey

Need a change in game plan IMO. We're no longer the biggest and strongest team in the comp but we have speed to burn. Would like to see better shape, dummy runners and back doors, instead of just the 3 or 4 hits ups and a kick in the end at every set. Much better performance than last week against the eels but still team is lacking the structure we need to suit our strengths IMO. Come on Akerz!

Sexymonkey said:
Need a change in game plan IMO. We're no longer the biggest and strongest team in the comp but we have speed to burn. Would like to see better shape, dummy runners and back doors, instead of just the 3 or 4 hits ups and a kick in the end at every set. Much better performance than last week against the eels but still team is lacking the structure we need to suit our strengths IMO. Come on Akerz!
Click to expand...

Yup the usual just roll over other teams with our massive size advantage, then pop an off-load to the fullback wont work this season. Unfortunately their halves in particular and fullback dont look anywhere near good enough to be title contenders, or even make the finals...hope i'm wrong though.

Lafu just needs more game time, to get some confidence back from the knee recon saw it last week when he trialed for our topside, the kid has had the x factor for a few years in the local game during finals footy - wouldn't write him off yet; Eko is a doctor IMO for all the halves positions, I watched the game and he didn't do to bad, early days. Last year's loss to the roosters during the finals was hard but yesterday was a good indicator , Ackland is still working to find the best combination - a loss is a loss but more positives then negatives this week then the disaster against Parra. 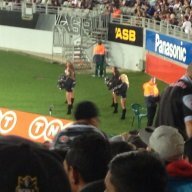 Siliva Havili was the kid who put his hand up last night he demonstrated great leadership qualities and was a standout by far.

Also absolutely impressed also with Stedman Lefau who debuted well and put in some mean yards. im loving the Mangere East boys coming through and dominating! He reminds me a little of Ben Henrys style of play. This kid is to be watched!

Viliami Kaveinga in the halves?? Hes a fullback or should be on the wing. That kid has the experience of the Premier Sharman grade helping take his team into the Fox, CM Stingrays, and capped NZ U'18s two years running. We should capitalise on those strengths and experience.
Reactions: ramraider78
Show hidden low quality content
Share:
Share