Lisone: I talked to Justin and straight away I knew where I stood.


Was that offer 10 games and you could still play the pokies as much as you like? I'm so glad this bad egg has gone!
Reactions: Waiting For Premiership

playdaball said:
What if ...

Lisone has had opportunity and has never improved his very obvious flaws.

Who are these others who have gone onto fulfil their promise elsewhere? The only ones I can think of are juniors like Taukeiaho who never got a chance here to begin with.

I can't think of a player who was given constant first grade opportunity who then went elsewhere, fixed all their issues and became a great player.
Reactions: warriors55, Rizzah, Hazman and 5 others

playdaball said:
What if ...

just thinking out loud here
Then good on him! It doesnt matter because he wasn't doing it for us, maybe that's the kick up the arse some players need. Because he was shit here!
Click to expand...

Contributor
I’m looking forward to the first time he makes a good run or slips a good pass, "shit! We never should have let him go!"

Kata never even took the field for the storm and we still had “great move by the storm, typical idiot behavior by the warriors letting him go”

He really was awesome in that 2014 winning U20s team though – it was a pretty good team list for the final, even if Ken goes onto to have the best career, at the time Lisone was the standout, he looked like he couldn’t miss, wasn’t the biggest prop but had mad workrate and some pace and skill.

Tough old sport, throw most of these guys on the scrap heap, or hanging on to an NRL job by the skin of their teeth by the time they are 25.

I’m behind the 8 ball and have just discovered that Sam Lisone and Georgina Hale are a couple … nice one.
Reactions: bruce and shuffle

playdaball said:
I’m behind the 8 ball and have just discovered that Sam Lisone and Georgina Hale are a couple … nice one.
Click to expand...

I follow her on instagram. She’s such a great person though. Sams a lucky dude.
Reactions: bruce, Akkerz, playdaball and 1 other person

She could show him a thing or two about the game.
Reactions: Worried2Death

After debuting in 2015 Sam Lisone played 85 games for the Warriors before joining the Gold Coast Titans in 2020. He played there fight up until the end of the 2022 season when it was announced that he would be joining former team mate David Fusitua at the Super League team Leeds Rhinos from 2023 on a two year contract. 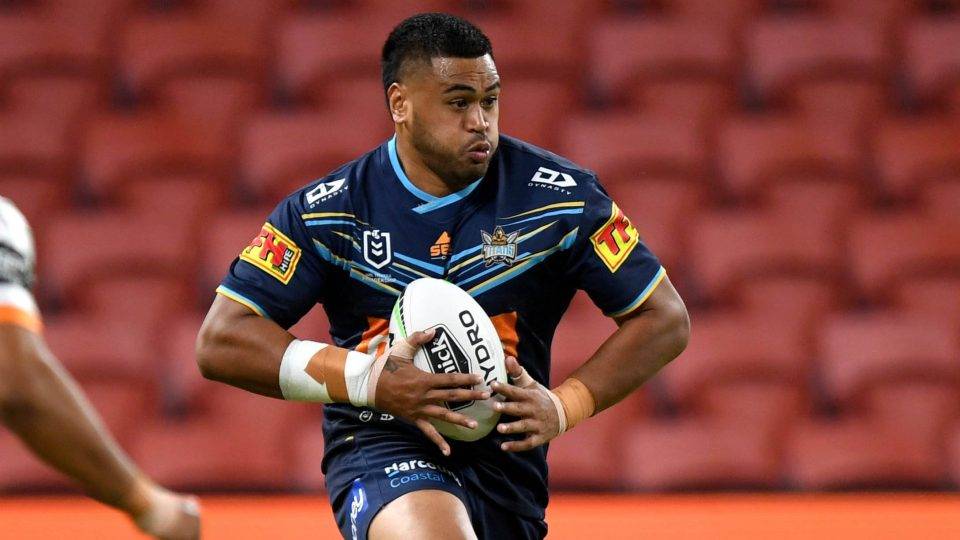 Lisone has won four caps for Samoa including appearing at the 2017 World Cup and has made nearly 150 NRL appearances during his career at the Titans and New Zealand Warriors. Born in Auckland, he will reunite with Leeds Rhinos Head Coach Rohan Smith who coached him in the Warriors U20s earlier in his career.

Smith is delighted to have captured the 28-year-old to bolster his pack for next season. He added, “Sam is a skilful forward who is big and aggressive but also has great footwork. I am sure he will settle in well to life at the Rhinos as he has always been a tremendous team player who brings a great deal of experience from the NRL having played nearly 150 first grade games.”

The 28-year-old is looking forward to working with Rohan Smith again, he commented, “I am excited to join up with the Rhinos. I have never been to England but I am keen to get over there. I have heard a lot of good stuff about the club and I can’t wait to get over and meet the fans.

“It is a new chapter for me and a fresh start, not just for playing but a new lifestyle, in a new country. I have got a lot of mates in Super League and I grew up in Auckland with David Fusitua, he’s probably one of the reasons why I wanted to come to Leeds because we were childhood friends.

“Rohan and I had a very close relationship when he was at the Warriors and I worked closely with him and he helped me a lot with my game. I have always liked what he was about; the way he trains his teams. He gave me a call and, to be honest, we never stopped talking, when he told me there could be a position at Leeds for me, my heart was set on the move straight away. You only need to look at what he did at Leeds this year, taking the team into the Grand Final, to know how good he is,” added Lisone.

Whilst Lisone will need to wait for the usual paperwork to be completed before he can fly to Leeds, his partner Georgia Hale will be at Headingley in the coming weeks for the Womens Rugby League World Cup. Hale is vice captain of the New Zealand Ferns. Like Lisone, she has played for New Zealand Warriors and Gold Coast Titans. Lisone added, “Georgia is over in the next few weeks for the World Cup and I know she is going to come to Headingley to have a look around. I’ll leave her future up to her but it is great to know that the Rhinos are serious about their mens and womens teams, as that is important to us.”

Leeds Rhinos Chief Executive Gary Hetherington added, “We look forward to welcoming Sam to the Rhinos. I would like to thank the Gold Coast Titans and Sam’s management team for the professional manner the whole process has been dealt with. I am sure Sam will settle in well at Headingley and I am become a fan favourite.” For me Sam Lisone will be remembered for his ‘mis-cued’ drop goal attempt and his dominant display and match winning play in the under 20 GF. He should do well in Super League.
Reactions: mt.wellington, Defence and bruce

The Falcon said:
For me Sam Lisone will be remembered for his ‘mis-cued’ drop goal attempt and his dominant display and match winning play in the under 20 GF. He should do well in Super League.
Click to expand...

I rather liked his two hit ups in the dying minutes at Canberra with elbows as bumper bars which allowed Shaun Johnson to slot a couple of DGs for the win!
Reactions: mt.wellington, Rizzah, Defence and 5 others

Contributor
Talent to burn, a massive ticker, but not NRL standard. the Poms will love him.

The Falcon said:
For me Sam Lisone will be remembered for his ‘mis-cued’ drop goal attempt and his dominant display and match winning play in the under 20 GF. He should do well in Super League.
Click to expand...