Roosters vs Warriors Gameday Chatter [Round 4, 2021]

Game day thread for our Round 4 vs Roosters clash. 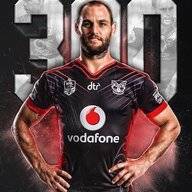 This has been a weekend of cricket scores, let's hope we are on the right side at the SCG.

Let's gone people!!!! Happy Easter! hope you are all enjoying the long weekend.
Reactions: kabkram, Worried2Death, Hazman and 13 others

Happy Easter Warriors fans, not certain what Easter bunny will bring us, just hope we never give up and grind out a win.

Definitely need Fusitua to find some form, as no team can carry passengers in this competition and good luck to Montoya on his Warriors debut, I hope it goes as well as Sean O'Sullivan last week. If we crack this one we will be a top 8 team.
Reactions: Murraytd, Worried2Death, Hazman and 10 others

I’m really hoping for a big game from Katoa and Fusitua/Maumolo! Don’t want a cricket score just want to win! Gotta make the most of a depleted Roosters team. Please be on to it!
Reactions: Murraytd, The Falcon, Worried2Death and 6 others

Our guys cannot afford to do what they did last week, and that is to expect a weaker Roosters side, coast for the first half in defence and try run it down with that massive second half surge that Brown and POS have created with this mega bench non stop forwards rolling machine.

Roger Tuivasa-Sheck admitted in the post game that when Canberra lost so many players, they were sitting back expecting to 'get them later in the game'....

A lot of our defensive issues are being caused by slow reaction time. Guys barely comming off the ten meter line in time to meet the runner at or near the advantage line, last week that let the Raiders destroy our try line defence, and otherwise break through our wonky line.

No prizes for guesing what the Warriors have been working on hardest in this weeks training. They are fitter than most, the Covid bubble creates that....this is our year.....well at least one of our years...maybe not thee year.

Stay focused
Stay disciplined
We should come out on top in a close one
Hoping for no injuries as this seems to be a regular across the teams this season
It’s fast out there
Warriors 18-12
Reactions: PNG Kiwi, HoRneT041, CHURCUZ and 2 others

This should be a good test of where we are this year to date. This is not a weak Roosters team inspite of their injured list. With Trent Robinson as their coach they will be well drilled and prepared.

They have superior outside backs, particularly with Ken and Fusitua playing injured or uninterested and our second choice centres. We have an edge in the halves and I'm expecting Kodi to be the difference there. But this game will come down to what most games do. It will be won in the forwards and with defence.

If we can get our fair share of possession, utilize our legitimate Warriors big pack and not leak points on our edges we should come away with the 2 points. I think that last point will be the biggest if. With the speed and experience the Roosters have out wide and with Teddy chiming in from the back it could be a tough day at the office for Fusitua, Pompey, Kodi, Sean O'Sullivan, Monty and Ken.

I've gone Warriors 1-12 but don't be surprised if it turns out to be a Roosters ambush.

Genuinely excited to watch this game, should be a cracker!
Last edited: Apr 4, 2021
Toggle signature
Old people are funny
Reactions: kabkram, Worried2Death, Hazman and 11 others

All I need is warriors to be all gravy and the bunker not to be "Stuffing" it up.

That's my one dad joke for the day.
Reactions: Murraytd, ramps, Worried2Death and 11 others

Did Turner Or Berry Make it on the bench this week?
Toggle signature
Kiwi @ Heart, Aussie By Need.
One Team One Dream

Believe in yourselves,just win by 6 .Nothing ventured nothing gained.Kia Kaha .Roll on kick off

Navigator said:
Did Turner Or Berry Make it on the bench this week?
Click to expand...

They are still on extended, Ale and Evans dropped off I believe. Hoping for a switcharoo but highly unlikely they would do that to Montoys on his debut haha
Reactions: HoRneT041, diehard, Inruin and 1 other person

Able to make my first live game of the year tonight- hoping to get a repeat of the last Roosters home game I went to (2018)
Toggle signature
This year yet?
Reactions: Bushman, BiggerD, warriorsfan92 and 17 others

We've also never lost to the Roosters in the month of April 6 from 6
Reactions: zaggo, kabkram, Kestrel84 and 14 others

Jaffa J said:
We've also never lost to the Roosters in the month of April 6 from 6
Click to expand...

Haha if clutching for some positive stats there...
Reactions: zaggo, Worried2Death, Citygirl and 1 other person

Lance155 said:
Haha if clutching for some positive stats there...
Click to expand...

I'll take anything that gives me hope
Reactions: Worried2Death, Citygirl, Stalefish540 and 4 others

Just can’t see us winning this one, too much strike power in the Roosters centres, this is where they will target us, that and our slow wingers.
Reactions: Worried2Death, danyooll, YeahNah 4020 and 2 others

Sledge said:
Just can’t see us winning this one, too much strike power in the Roosters centres, this is where they will target us, that and our slow wingers.
Click to expand...

Jaffa J said:
I'll take anything that gives me hope
Click to expand...

Reactions: zaggo, warriorsfan92, kabkram and 10 others

Defence said:
Did u know we’ve never lost to the roosters when we’ve scored more points than them