If Hurrell was returning I would pick him in the 15 jersey and play impact bench. Tui and Kata deserve to hold onto their jerseys and even though I wish Wright was faster, he is doing a very solid job for us and he does not deserve to lose his place in the team at this point in time.

Seb was ineffective yet again. Peyroux or RFM onto the bench if Lousi is still out with that hammy
Reactions: 1 users

I will stick with the same team

Same team, Friend can start, Havili off the bench either side of half time.

Contributor
The wabbits are just ripe for the taking

The 2 points are ours!!
Reactions: 1 user

It will be the best defense that decides who is the victor of this game...

The team who shuts down the others attacking raids best will take home the 2 points...

Such is the way with games in Perth...

Rapira or Lousi (in that order) if either of them are fit in place of Seb.

We were the better side last year, but only played 60 minutes. Difficult for the boys to play in Perth, but they can make it easier on themselves. Still about 4 unforced errors in the last game, and we gave away some outrageous late tackle count penalties when the Knights weren't even threatening a quick play of the ball.

I think the Burgess twins are already looking for Nathan Friend so they can run every hit-up at him, we are going to need a big effort in the middle on defence and a big effort from our outsides to carry a load on attack.

Stick with the same players as much as possible for the remainder of the season.

This teams been sczrewed by injuries and rookie players learning.....funny thing is....these Rookies can hang tough in close
Matches.....I would stick with them.....they are being moulded into types that are fit enough and determined enough to be better than their competition from incumbents like Hurrell and Laumape who have had mental issues.

They are shaping up really well....they just need game time and experience....but for Warriors the new crop are not fading in that fatal last ten minutes

I dont have a problem with a game in Perth. Infact its becoming a tradition.
Its a 4 hour time difference, not 14.This excuse of timezones is getting real old real fast. This week we kick off at 7:30pm NZ time. If your up for it the time means nothing and you keep fighting.
We fly on Wednesday.
No excuse in my book for losing. Just harden up and do the business.
Broncos overcame a 3hr difference to beat us on our anniversary.
Jake and Hoffman played on Wednesday alright with the game finishing at 12:30am NZ time and backed up 3 days later. They had longer to acclimatise I agree, but they did the job at a very uncommon time to play footy.
We play in Perth cause it sells out, despite it being an away game I'm sure WA government or someone is paying the club some cash for all the promo work. We are helping to grow the game and it's practically a home game with all the kiwi fans.
Highlanders won there last week. Why can't we?

We're playing average footy like the Rabbits and finding ways to win despite our sloppiness. This will be another entertaining clash and I reckon will smash em by 20. Like I hope every week.
Reactions: 5 users

Exciting time for the Warriors. Win this one and they are eyeing the top 4. They have to win.
Reactions: 1 user

jonno said:
Next home game we get against the bunnies needs to be a night game in Christchurch at a nice balmy 4 degrees... Freeze those rusty a holes...

This is really turning into a grudge match...

- Ross Dependency Ice Shelf. Seriously what's the point of calling yourself "New Zealand Warriors" if you're not even going to bother to try play a team in one part of South Pole that we all own. I would select same teams that we had as last week only I would start Konnie at the bench and rotate him with Kata and Lolohea during game because for all skill and strike power they bring to side, I still don't rate either one as eighty minute player just yet. Also for all the talk of time difference there won't be that much difference for Warriors playing here and playing away from home in Perth as Perth is said to have highest number of ex pat kiwis living there out of any city in Australia. It's practically a home game for us playing them in Perth which cool, I think will help to explain to people why I am so confident that we will win this match considering Rabbits recent form as late has ranged from poor to bad to sub par suckage the likes of which we've not seen before ...
Last edited: Jun 2, 2015
Reactions: 1 users

Contributor
Matagi off the bench instead of Seb would have been a good option.......

BA-AD Luck said:
If Hurrell was returning I would pick him in the 15 jersey and play impact bench. Tui and Kata deserve to hold onto their jerseys and even though I wish Wright was faster, he is doing a very solid job for us and he does not deserve to lose his place in the team at this point in time.
Click to expand...

Totally agree re wright. But unless your proposing to make Hurrell into a forward permanently , then i see no point putting him on unless you put him back as centre. He has to play in his position and play well or lose it. Tui could go to hooker (he seems to be able to play well everywhere and as you state doesnt deserve to be dropped.

Inruin said:
Matagi off the bench instead of Seb would have been a good option.......
Click to expand...

Agreed. Waste transferring him mid season where he will struggle for game time at the roosters too. We look think in our prop and second rowers

Who is the odd man out if everyone pulls through fit and Hurrell is back next game ?

Will Tomkins "re-injure" his knee in training?

Assuming we lose this week, and no injuries. Does Hurrell walk back into the side or does he bide his time in NSW Cup? The knee jerk response after a loss will be to shove him straight back in, but if we lose, it'll be because of errors, penalties and defence. 3 things that Konrad will only make worse, rather than improve. He's been so disappointing this season I'd be tempted to leave him in NSW Cup.
Reactions: 1 user 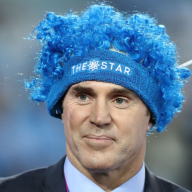 ShaunJohnson7 said:
Hopefully Tomkins is in better nick next weekend.
Click to expand...

Andrew McFadden said:
"Sam's not going to be at 100 per cent for the rest of the year," McFadden said. "Most guys that come back from PCL injuries generally have to carry it for quite a while.
Click to expand...

When Hurrell comes back I would love to see Kata tried at hooker, i think he would be explosive there.

One person that should be taken over and never brought back is DJ Hoolagin, man that guy winds me up

ToiletDuck said:
Assuming we lose this week, and no injuries. Does Hurrell walk back into the side or does he bide his time in NSW Cup? The knee jerk response after a loss will be to shove him straight back in, but if we lose, it'll be because of errors, penalties and defence. 3 things that Konrad will only make worse, rather than improve. He's been so disappointing this season I'd be tempted to leave him in NSW Cup.
Click to expand...

Hurrell deserves nothing more than a bench spot. Mainly because he has squandered his opportunities out wide this season and also because he is more damaging than iafeta paleaaesina was in that roll.
Reactions: 1 user

Contributor
If we play at the same level, win or lose, this weekend, and noone gets hurt, i think he will take his place at right centre and wright will miss out. Maybe they get him to play NSW cup for a week but the peoples champ won't be there forever.

The whole club seems to have half an eye on next season and turning Hurrell into a bench forward is not part of the long term plan, they just signed him to a contract extension right? He has to play in his position and get back on track. He was considered an indispensible player not so long ago.