Might see Gavet instead of Isaiah and i think Erin might slot if not Jazz is ready to go.

eric said:
Foran isn't available until round 3. Also, do you like Maumolo or is he just there because you prefer him over Vatuvei?
Click to expand...

Feck!! I thought it was round 3. Maumolo is not my pick, I just think he will be there because he will be selected.

mt.wellington said:
Second biggest mystery is who will play the bench utility?
Click to expand...

I just hope that SK does not play with a back on the bench. This is where Cappy really stuffed up last year...

I'm predicting the team will be very similar to the starting line-up which faced the Titans.
My only concern with that is the wingers.. Lolo got found out with his positional play on the wing last season and the only try the Titans scored in the trial was through similar play. Kenny isn't good enough for NRL Standard, Sorry Kenny.

I'd prefer Fusitua back on the wing where he scores for fun and either Lolo or Asyhford at centre, with any Fijian running around in the Auckland Schools or club rugby scene on the other wing.
Reactions: Gen. Melchett and Sup42

Maddog said:
My only concern with that is the wingers.. Lolo got found out with his positional play on the wing last season and the only try the Titans scored in the trial was through similar play. Kenny isn't good enough for NRL Standard, Sorry Kenny.
Click to expand...

Lolo is a finisher though even allowing for his defensive deficiencies. I would like to know what SK sees in Maumolo.

Judging by the NZ Herald article this morning, Johnson is expecting, as most forumer's are picking, to have Ata at #6 against the Knights.

Miket12 said:
Judging by the NZ Herald article this morning, Johnson is expecting, as most forumer's are picking, to have Ata at #6 against the Knights.

SK said after the trial he was playing 6...
Reactions: fizurg

Swanley said:
SK said after the trial he was playing 6...
Click to expand...

he should stick to coaching rather than trying to make a come back in an unfamiliar position.
Reactions: frankspence, Deranged, Blain and 13 others

Inruin said:
he should stick to coaching rather than trying to make a come back in an unfamiliar position.
Click to expand...

Inruin, don't worry, SK is only there until Harris arrives next season!!!
Reactions: frankspence, Billyspleen75, Off The Bench and 3 others

I see everyone naming Lillyman to start....
He has always been so much more effective off the bench imo and this has been proven over and over.
One thing about bull is he does have a nice quick play the ball and u really notice it when he comes on against tiring defences- that's the role he always plays so well for Qld- he tends to be pretty ineffective at the start of games.
The last few years his form has gone like this- starts a couple of games, plays poorly and gets moved back to the bench. Plays so well off the bench he gets promoted to the starting side and then goes off the boil and the pattern repeats....
I know he's the senior prop but u still have to pick players in the role they're most suited to.
Vete is a lock to start and I'd probably peer him with gavet, who can be a bit of a log carrying the ball up but has that physical type game that can match fire with fire in the opening exchanges.
Lillyman and Lisone can lift the speed of the game coming off the bench and afoa offers another option and covers the backrow as well.
Just a small thing but brings a better balance to the side imho.
Reactions: kavafred, Vancent, Gen. Melchett and 10 others

Will Manu be ready and match fit? No Ashford in the reserves.

Notable omissions: Ben Matulino is still recovering from knee surgery and will miss the first couple rounds of the new season. Bodene Thompson is in a race against the clock to be fit for the opening round as he overcomes an ankle injury – it’s still unclear if Kearney will risk him to start the season.

Notable omissions: Rory Kostjasyn and Pauli Pauli remain unavailable for the Knights as they recover from throat and hip injuries respectively.

Not a team but an early prediction for this game:
Provided Princess doesn't go missing and it's not too hot, I'll take the Warriors by 6.
Reactions: Lord Gnome of Howick MBE, fizurg, Tonbridge (Swanley) and 2 others

The Warriors are facing the prospect of being without both veteran wing Manu Vatuvei and back-rower Bodene Thompson for next week's NRL season opener against Newcastle.

The pair missed both of the Warriors preseason trial matches through injury and remain in doubt to take the field at Mt Smart Stadium next Sunday.

Vatuvei trained well this morning but is working his way back to full fitness after tweaking a knee during a wrestling session earlier this month while Thompson is battling to overcome an ankle problem.

"There's a couple of guys there who won't have played matches so I'll have to have a think about that over the weekend," said coach Stephen Kearney.

"Manu, he's progressed really well the last couple of weeks but he hasn't had a trial and Bodene is on the same boat so they're the two main guys (in doubt)."

Young wing Ken Maumalo has played well in Vatuvei's absence, performing strongly against both Melbourne and the Gold Coast over the last fortnight and is ready to slot in once again on the left wing.

Kearney may be tempted to throw either Bunty Afoa or impressive 18-year-old Isaiah Papalii in if Thompson is not fit to face the Knights.

Former skipper Ryan Hoffman is recovering well after suffering a foot strain early on in he 26-6 win over the Titans and Kearney is hopeful he will ready to play.

Halfback Shaun Johnson did not take part in the team session today but trained in the gym although there are no concerns over the No7's fitness.

I've spoken to a mutual friend of Manu's who said Manu wants to be available but has a way to go - certainly not "definite"
Reactions: fizurg

Will Manu be ready and match fit? No Ashford in the reserves.

Notable omissions: Ben Matulino is still recovering from knee surgery and will miss the first couple rounds of the new season. Bodene Thompson is in a race against the clock to be fit for the opening round as he overcomes an ankle injury – it’s still unclear if Kearney will risk him to start the season.

Notable omissions: Rory Kostjasyn and Pauli Pauli remain unavailable for the Knights as they recover from throat and hip injuries respectively.
Click to expand...

You are missing Anthony Tupou from the Knights, I will definitely taking the Knights to stay within the points start, they have a 44-0 win over an under strength Raiders and a smart coach and have recruited smartly for 2017.
I am worried for the Warriors because we have not recruited at all, Mooks has praised Hingano's defense? obviously he didn't watch any games from last year as Ata was inadequate, we have Hoffman under a cloud and no Mutts or Bodene, I see our forward pack getting under too much pressure and reverting to bad habits.
We'll soon see I suppose.
Reactions: 3rdstriker

Stephen Kearney hopes to have close to a full strength side to pick from for round one of the NRL season as he gives the players a weekend off before battle commences.

The Warriors held a field session at Mt Smart Stadium on Friday morning, using one of the outside fields as preparations continue at the venue for Saturday's Bruce Springsteen concert on the main field.

Shaun Johnson, Kieran Foran, Jacob Lillyman didn't train on the field and Kearney is keen not to overburden his key players so early in the year. 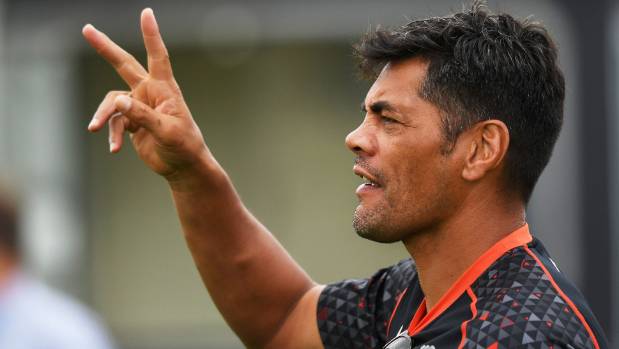 ANDREW CORNAGA/ PHOTOSPORT
Stephen Kearney will have an almost a full strength squad to pick from for the Warriors' first NRL game of the season.

Ryan Hoffman, who had strapping around one of his feet didn't train either, while James Gavet also needed to have ice put onto his knee during the training session.

Both Bodene Thompson and Manu Vatuvei took some part in the outdoors session, but Kearney said he needs to decide whether he'll pick them for next Sunday's home game against the Knights, without having featured in either trial game.

"Manu has progressed really well the last couple of weeks and Bodene is in the same boat," Kearney said.

Overall though, Kearney is happy that unlike other clubs, he doesn't have any long term injury issues, other than Ben Matulino, who is expected to be back for the round five game, against the Titans.

"Everyone is progressing pretty well, it looks like everyone will be close to being available for round one," Kearney said.

"There are a couple of guys who won't have played matches, so I need to have a good think about that over the weekend."

Kearney may feel the need to ease Vatuvei and Thompson back into first grade footy by giving them a run in the NSW Cup game against the Knights, which will take place earlier in the day next Sunday.

If that's the case Ken Maumalo will start on the wing and Bunty Afoa is likely to get the nod to start in the second row.

For the first two rounds it will be Ata Hingano playing in the halves alongside Shaun Johnson. Hingano saw 81 minutes of first grade action last year and despite being just 19 years old, Kearney has been impressed with him and and confident in his abilities.

"For a young guy, who could still play in the 20s, he's got a very mature way about him, with the way he plays his football," Kearney said.

"He's very sound defensively for a little-ish guy. I've been very happy and he's had a really good preseason."

For some of the players, this will be their last weekend off until the round 15 bye in the middle of June. They will be back on Monday making the final adjustments to how the team played against the Titans in last weekend's trial in Palmerston North.

"From the weekend we've had areas we want to improve on and areas where we want to keep doing well and that was the focus for us today," Kearney said.

"It will be no different next week, we'll have the same points we want to improve on from last weekend's performance.

"The boys have got the weekend off and I've got no doubt that the boys will come back with a real spring in their step. We're a week away from round one, I'm getting excited about that and I've no doubt that the players will be too."