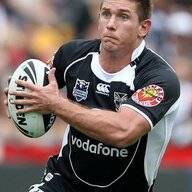 Burncity warrior said:
We'll officially he quit, so in that case they don't have to pay him out. Everyone knows he was pushed so I think they've given him a payout anyway to keep him quiet.. Gus is trying to save face by saying Trent quit 10 days after he said Baz isn't going anywhere, a payout was probably a handshake agreement to save Gus's arse.
Click to expand...

Once A Warrior said:
Ha! Right?
Click to expand...

This week looks like a repeat of Gould's time at the Panthers. We need to take our time looking for an experienced coach as its a tough gig. He would be a difficult guy to be a coach under. A shame as when he isn't being negative he has some good insight in his commentary like tactics he's used in games due to specific conditions. He should be a good sounding board for a coach but he doesn't have the personality for it.

Overall Penrith are reaping the benefits from his time there. Mainly on the development front and money being invested into the club. The Bulldogs will likely see benefits too depending on if they can put up with him and the personality clashes that follow him and are prepared to wait.

We had him in a different role. An area (development) he is passionate about and also as a consultant. Things may have turned sour on the consultancy side if he pushed too far. I'd suspect it may have been more on the development if the club and the NZRL who are not flush with cash couldn't do all of his recommendations. Or he couldn't get the NRL to fund investment here in New Zealand.

We probably would have him on one of his shows saying how he didn't get the support he needed.
Show hidden low quality content
Share:
Share