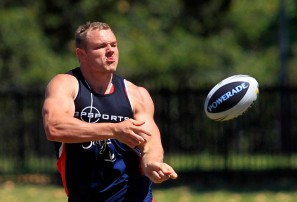 
Roosters and former Brisbane prop Martin Kennedy is facing a two-year ban for illegal drug use after reports he will be handed an infraction notice by the NRL.

According to the report on Channel Seven, Kennedy is looking at repercussions for illegal drug use, and his text messages are in the possession of ASADA as evidence.

Aside from former Canberra winger Sandor Earl, no other player outside Cronulla has been issued with an infraction notice.

Kennedy’s name has come up in the investigation before, with the Daily Telegraph naming him as one of the players to be interviewed by ASADA in 2013.

Roosters chief Brian Canavan told Fairfax he doesn’t know of any infraction notice to be handed down.

He has been named on the Roosters bench to play the Panthers this weekend, but if the NRL hands down an infraction notice after the integrity unit meets today he will be stood down and play no role in the action.

It is unclear at this stage what the substance allegedly involved is.

Kennedy returned to the Roosters in 2015 after a stint at the Brisbane Broncos.

Contributor
Funny I thought the current ban was 3 weeks with the rest suspended, surely they must be having a laugh talking 2 years
Reactions: ¿N. ig-mah¿

After months of not much happening, the drug scandal picks up again in Australia with some alleged photos of an AFL player for Gold Coast Suns (- honestly speaking as somebody who's in marketing, I just want to say who keeps coming up with these crap names for sports teams ?!? Hot Shots would of been so much better ! Suns ! What's their team logo ? That massive baby head with sun behind it from Teletubbies because I think it should be when to me their team name sounds like sort of dumb stupid shit that any three year old kid could come up with ... ) with rumours that they also have photos of certain number of NRL players in same comprising position. I so hope that's not true especially when we're this close to an Origin decider ...
Last edited: Jul 2, 2015
Show hidden low quality content
Share:
Share