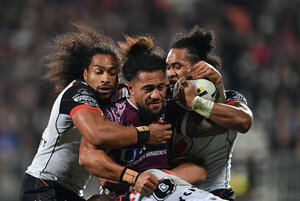 ​
NZWF Official thread for the 2019 Round 3 Warriors team list and discussion...

Contributor
Manly gonna be desperate after 2 losses and we struggle with games in NZ outside Auckland. Add in the Tigers debacle and I feel less confident this week than I have the last 2.
Reactions: danyooll, Jack Bourke, Vancent and 12 others

I feel more confident about this one than the Tigers game. West’s had a good side and our record at Campbelltown is not flash.
Reactions: Warrior482, Hazman, YeahNah 4020 and 1 other person

Hopefully this is not just another walk over win, like the tigers were. Well, they were until kickoff

Looking for a big response from the boys this week. How they bounce back will be a good indication to how well conditioned they are
Reactions: Sup42, Worried2Death, Hazman and 1 other person

Me, I'm looking for a 'real sorry folks' response from each and every one of them. 'We screwed up big time and here's our way of making it up'.
I want Manly to feel that they had no idea what was gonna hit them...
Reactions: Mr Frank White, Sup42, Fazz and 1 other person

Surely they couldn't play as poorly twice in a row.
Also the Tigers are a good team, with a very good coach and we switched off.
Reactions: DANZ and Boats n Hoes

Hopefully we see a bounce back this weekend.

We don't have to worry about the extra time with the international travel. Need to take advantage of the convenient schedule.

Word is Tommy Turbo is close to being back.

Hopefully one more week for Tommy!
Reactions: Off The Bench, Defence, Hazman and 5 others

Makasene said:
Word is Tommy Turbo is close to being back.

Hopefully one more week for Tommy!
Click to expand...

Add Fonua-Blake onto the list of people who I wish weren't coming back, that boy is large!
Reactions: warriorsfan92, Off The Bench, Defence and 2 others

There will be many who'll be looking to atone for last week's poor performance.

I think we'll see a definitive bounce back this week and a game played on ball retention and earning the right to play. Working on percentages rather than jungle ball.

I would retain Luke as starting hooker. Bring Papali'i onto the starting team as well. Bench would be Ah Mau, Sao, Jazz.

Fourth spot is the tough one - we do need a gamebreaker to come on late in the half to really spice it up? I feel we are missing that air of unpredictability at the moment - is that gamebreaker Roache? Would Chanel Harris-Tavita or Hayze Perham suit that role?

The other concern is protection for for Green. Too often he was left isolated on the last and prone to being tackled. The boys need to look after him, especially if our general controls the majority of our plays.
Reactions: Jack Bourke, Sup42 and Worried2Death

I imagine Roache will get the nod if he's fit.. Can cover the outside backs in case of injury and come on for 20 minutes to spell Luke at the end.
Reactions: Sup42

Any update on Roache? Was he out last week due to a minor injury

I’m pretty sure before the match Todd Payten said he did his calf wonder how bad it is?
Reactions: Hazman, Off The Bench, YeahNah 4020 and 1 other person

I would replace Lawton for Luke if Luke is not fully fit, zero running meters last games from our number 9 not good enough. I also want to see our forwards carry more, we seem very lopsided on carries coming from our back 5. While meters from the outside backs is a huge part of the modern game no other club has all backs in it's top 4 running meters. There were sets pretty early in the game when the forwards should have been fresh, where 3 or even 4 first carries were all the backs.
Reactions: Hazman, Mr Frank White, warriorsfan92 and 5 others

No changes at all! Very disappointing.
Reactions: Waiting For Premiership, Stalefish540, Beastmode and 3 others

Issac Luke has been named at hooker while Karl Lawton has been included on an extended bench for the Vodafone Warriors ahead of Saturday’s clash with the Sea Eagles at AMI Stadium in Christchurch.
The Vodafone Warriors will head into the “away” game looking to bounce back after a loss to the Wests Tigers last Sunday.
All 17 players who took the field at Campbelltown have been named in this week’s line up with Lawton’s inclusion in the place of Nate Roache the only change to the 21-man squad named by coach Stephen Kearney last Tuesday.
Roache was a late withdrawal from the Tigers game after suffering from calf tightness at the captains’ run.
“Last week’s performance against the Tigers was disappointing,” Kearney said.
“I’m expecting our players to respond accordingly and Saturday’s game against Manly gives us a good chance to do that.
“Nate’s still got a bit of tightness in his calf so we won’t be risking him this week.”
Although he has been charged by the NRL judiciary for dangerous contact on Tigers forward Mikaele Thomas, prop Sam Lisone has been included on the Vodafone Warriors’ bench.
He is pleading not guilty and his hearing will take place at NRL headquarters in Sydney at 9pm (NZT) this evening.
If he fails to overturn the charge, Lisone will be sidelined for two games.
Likewise, Lawton, who played for the club’s Canterbury Cup NSW team last weekend, has been charged with tripping. After also pleading not guilty, his hearing will take place on Wednesday night.
If found guilty, Lawton will miss one game.
Should either player be ruled out, the Vodafone Warriors will be able to replace them in the 21-man squad for Saturday’s game against the Sea Eagles.
Manly, who are officially the home team this weekend, will head into the game having yet to record a win this season after losses to the Tigers and Roosters.
Reactions: Johnnyray, Hazman and Off The Bench

Diesel said:
Any update on Roache? Was he out last week due to a minor injury
Click to expand...

Guess we are getting the answer whether we can rely on him as a fulltime hooker tbh. Hamstring strain over Christmas and one game into the season before breaking down again. Minor or not, I wouldn’t feel comfortable heading into a season with him as first choice hooker without a fantastic back up.

Hopefully last weekend was just the perfect shitstorm of events and the combination of playing in CHCH and the bounce back factor fires up the whole team. We’ll need a big one with Manly most likely being full strength again.
Reactions: Hazman, CompletionRate, 3rdstriker and 10 others

Lisone fighting the charge. Not only should he be found guilty they should also give him additional weeks.
Reactions: Hazman, jonno, Waiting For Premiership and 15 others
Show hidden low quality content