​
NZWF Official thread for the 2019 Round 22 Warriors team list and discussion...

The official team list will be posted as soon as it becomes available..

Front rower Leeson Ah Mau becomes the NRL's newest 200-game player when he lines up in the Vodafone Warriors’ historic 22nd-round contest against the Sydney Roosters at the Sydney Cricket Ground on Sunday (2.00pm kick-off local time; 4.00pm NZT).
Ah Mau’s career milestone coincides with the first time the Vodafone Warriors have played at the famed SCG.
The 29-year-old Mangere East junior, one of only two players to appear in each of the club’s 20 matches this season, has been named to start again in a 17-man squad which is the same as the one used in last Friday night’s impressive 24-16 win over the fifth-placed Manly-Warringah Sea Eagles.

Ah Mau returned to the Vodafone Warriors this season after starting his NRL career with two appearances in 2009.
The New Zealand and Samoa international then linked up with North Queensland for two seasons (making 33 appearances in 2010 and 2011) before spending seven years with the St George Illawarra Dragons from 2012-2018 (144 games).
Renowned as one of the competition’s most consistent players, Ah Mau has underlined his value averaging 111 metres a game this season while he’s one of the most effective defenders in the game, making 577 tackles and missing just 10. In the win over Manly he ran 137 metres from 12 carries and made 29 tackles without a miss.
While head coach Stephen Kearney has named the same 17 players who started against Manly, he has included standoff Kodi Nikorima on the extended bench, the Kiwi halfback coming back into the frame from an ankle injury he suffered in the 19-18 win over the Cronulla-Sutherland Sharks. Nikorima missed the loss to Parramatta and then re-injured his ankle early in the match against Canberra which ruled him out last week.
The four players named in jerseys 14-17 are again Adam Keighran, who was used at hooker last Friday night, plus middle forwards Sam Lisone, Bunty Afoa and Ligi Sao. Kearney used only 16 players last week, the unused Lisone instead turning out for the club’s Canterbury Cup side on Sunday when he made 168 metres from 19 runs.

The Vodafone Warriors lie 11th on the ladder on 19 points, two behind eighth-placed Brisbane and three behind seventh-placed Penrith.
They face a Roosters side coming off an impressive 22-18 win over the in-form Canberra Raiders to sit second on the table.
The Vodafone Warriors lead the Roosters 22-17 (plus one draw) in the 40 games played between the sides since 1995. In 19 away matches, the Vodafone Warriors are 10-8 ahead with one draw.
While they put together a run of four consecutive wins over the Roosters in 2016, 2017 and 2018 (including a 30-6 victory at Sydney Football Stadium last season), the last clash between the two ended in a 32-0 triumph for the Roosters at Mount Smart Stadium last May.
Reactions: 5 users

Since it's at the SCG, will Halligan stick Vossy's gold and onyx fountain pen into the pitch?
Reactions: 1 users

If Nikorima is fit I hope he replaces Jazz at 9 not Chanel Harris-Tavita at 6. Then Jazz to 13.
Reactions: 9 users

A BIG shout out to Leeson Ah Mau on his 200th.
Those stats are super-impressive. 10 misses out of 577 tackles. Phew!
Reactions: 18 users

Probly the strongest team we can name but fuck... Beale, Pompey, Hiku and Ken v Latrell, Topou, Manu and Ryan Hall...if Kearney can pull this off it'll be his greatest achievement again. Only a supercoach could outwit Trent Robinson with a team stacked like that.
Reactions: 4 users

Worried2Death said:
Probly the strongest team we can name but fuck... Beale, Pompey, Hiku and Ken v Latrell, Topou, Manu and Ryan Hall...if Kearney can pull this off it'll be his greatest achievement again. Only a supercoach could outwit Trent Robinson with a team stacked like that.
Click to expand...

I think it'll be up to the blokes on the field...

Up against a legit superstar edge..
Reactions: 1 users 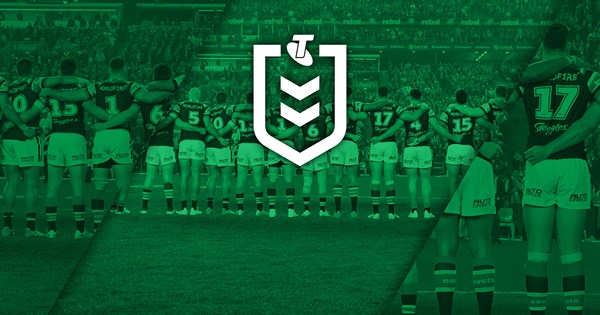 The official 21-man squads for all 16 clubs for this week's matches, updated with 19-man line-ups 24 hours before each game and with the final 17-man sides one hour before kick-off.

Mr Frank White said:
I think it'll be up to the blokes on the field...

Up against a legit superstar edge..
Click to expand...

We're on a hiding to nothing on paper, the lads will need to step up another level from Manly, these guys are light years ahead of us.

There's something about the way Roger Tuivasa-Sheck plays against the Roosters though, he has a lot of close friends in the team, sometimes that can make you believe anything is possible on the day.
Last edited: Aug 13, 2019
Reactions: 4 users

The result entirely depends on which side turns up. If the side that played the Raiders turns up, turn the TV off. But if last week's side turns up and a few others things go our way during the game, I could see us producing another shocking upset in Sydney like we did last year. Come on boys!
Reactions: 6 users

The game of the season was the storm one. This game could surpass on the grounds that the warriors rise and fall to the level of their opponent (in most cases).
Reactions: 4 users

Fearmuss said:
Hopefully the pitch is wet.
Click to expand...

And shrouded in fog...
Reactions: 2 users

Not sure why Herbert isn't playing, Beale showing he is only a defensive centre these days may have something to do with it. Was too slow with no impact on the wing.

The Roosters have been a bit hot and cold the last while, have a bit of hope. I'll be at the game, my first Warriors game in Sydney. Hope Kodi is our starting 9, Burr dropping to the bench and Lisone gone.
Reactions: 1 users

When is Herbert due back?

Apparently Broncos are picking up some of the tab on Kodi. News to me. We need to persist with Green and Chanel Harris-Tavita purely becauze Green can teach him more while his game is still developing. Kodi needs to man up and take one for the team and start at hooker.
Reactions: 11 users

Not having a go at Ken who's been superb but when was the last time he scored a try where he had to beat his man or didn't simply catch and put down the ball? I can remember 4-5 trys he's blown because of a lack of speed and skill. Surely we can move him to edge back row next year he would be a monster there.
Reactions: 9 users
Show hidden low quality content