Hot and wet, late game at a hostile away ground.

We've been doing well in the heat lately. We had our best ever start last season, and we won more games away from home that at the Mt. Amazing seeing as those games tend to be warmer, and used to be the games we'd lose more often than at home. Then on a warm dry day at the Mt last weekend we put 40 on the Dogs. Nice!!!

Wet has never been our strong point. You'd think living in Auckland they'd know how to play in the wet.

Playing late. Don't get me started.

Hostile away grounds. We have probably the best run of crowd support of any team when playing away from home. The GC, Melbourne, Some grounds in Sydney, Perth, the list goes on where we have friendly away crowds. But man it really shows when we go to somewhere that we're not welcome. Fucken Snowflakes!
Reactions: Hazman and YeahNah 4020

Old Sid said:
I honestly feel that we won't see another game like that again all season. As someone else rightly said, it was a perfect storm for about 8 different reasons. Tigers were very fortunate that they were the chosen few to benefit from the draw, timing, weather, last week in ChCH, attitude, ref and so on....
Click to expand...

With you there although I reckon this week's game might be a little scrappy...if I'd been asked I'd say the 2nd game should have been deferred, as it is I knew it would be a write-off. Like one of the ozzie commentators, no-one was going to beat them in that first game - it was a one-off.

Ever been in a car-crash? Me, the adrenaline kept me on a high for a few days, thought I had super-vigilant powers lol, then I crashed (figuratively)

I know how I felt in the week after CH-CH...hyper, then just couldn't think straight (wtf, wtf moments), then real angry for a couple of days, then I crashed, flatlined. That only started to come right after the following weekend. Even now still have some wtf moments.
Point is, no-one lives in a vacuum, not the Warriors, none of us. Let that sink in the next time someone has a hissy fit about how the team sucked in the Tigers game, how individual players sucked, the coach sucks & so on. Some people think the coach has failed when the team isn't primed for the game. In normal circumstances probably, but in extra-odinary circumstances good luck with that!

There's only a couple of older guys in the team the rest are basically little older than kids in my eyes. A couple have whanau in CH-CH, they all felt it, just like me, like you & plenty of others.
There's no way I'd judge any of those guys on that game and not the one coming either
Reactions: Hazman, Onewarrior and Old Sid

It was telling the basically every single player was off and the reserve grade was also off. Seemed mentally not there
Expand signature
Smash em bro
Reactions: Mr Frank White, Hazman, Juno and 2 others

My underlying concern in all of this is that there is a risk of a Sonny Fai-type season... not the same in any way, nor an excuse, but gonna be hard for some time to know that everyone is ready to fire... on a regular basis at the same time. Not quite the same for the Aussie teams. You only need 2 in any one game to make a few errors and you're on the slippery slope. Senior leadership will be key in recognising this early and adapting very quickly.
It will be really interesting this Sat afternoon...might be a very unpredictable half season. I surely hope not.
Reactions: Hazman and Juno

Yes, you could be right. I'm hoping that the reslience they have been growing in the past 2 years is called on and comes to the fore. Might take another game but too many and confidence takes a knock. I think SK & Corvo & the other adults in the room will focus them but like you said, has to be as a unit
Reactions: YeahNah 4020

Juno said:
Yes, you could be right. I'm hoping that the reslience they have been growing in the past 2 years is called on and comes to the fore. Might take another game but too many and confidence takes a knock. I think SK & Corvo & the other adults in the room will focus them but like you said, has to be as a unit
Click to expand... 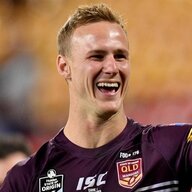 Yeah I see one, his worst stats are the season he was playing at the Warriors lol
Reactions: BeastMode, Hazman and Dave Brough

It was a rare brain snap by one of the NRL’s good guys but Blake Green can count himself lucky he escaped the wrath of the NRL’s match review committee after flipping the bird to a sideline official.

The incident occurred late in the first half of last week’s 34-6 loss to Wests when Green contested a loose ball with Tigers player Luke Garner. He gave the touch judge the one-fingered salute after he ruled a Tigers tackle restart.

Tigers winger Corey Thompson went on to score on the back of the extra set.

The match review committee decided against charging Green because of a precedent in 2017 where a similar infringement was let go.

Instead, the NRL issued the Warriors veteran a concerning act notice and the club an official warning.

It was also suggested that Green’s reaction was instant and did not have any malice.
Click to expand...

Looking forward to a great performance from the refs today...

Users Who Are Viewing This Thread (Users: 0, Guests: 2)