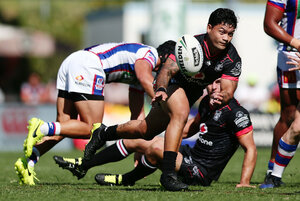 ​
Thread to share your thoughts on the Round 22 game between the New Zealand Warriors and Newcastle Knights after the match. Name your Man of the Match, discuss the coach, captain, starting team, bench, opposition, game tactics, substitutions, errors (or lack thereof), penalties (or lack thereof) highs, lows, refs etc.

The Knights were tough, especially at the start of the game, but they will be black and blue after this. Look forward to a cold Auckland night in the ice baths! Papali’i tackles are really dominant. He is so strong and when his body bulks up I think we might see a massive change in the impact he creates offensively.

I think our long kicking has been underestimated this year. Shaun Johnson and Green find a lot of space. It wasn’t so long ago that we seemed to be getting dominated inside our 30/40 followed by a kick down the opposition’s throat set after set, week after week. Our long kicks are hitting turf and giving us time to get up in their face.

Night games at Mt Smart don’t really suit us anymore (apart from the power of some of our backs of our line). Especially when the ref tries to keep the game running by not blowing the pea out of the whistle, as the wrestle kills all momentum in heavy, greasy conditions. Just thinking about that, I wonder how different Shaun Johnson’s career might have been if he played his home games on some of the dry fast tracks of Australia. I think Roger Tuivasa-Sheck has struggled with this in his time here. It just shows you how fantastic he is as an all-round player that he can be so elusive and strong in other ways. For this reason it wouldn’t be a total disappointment to play finals in Oz.

I love how angry Ken is at the moment, seems to have a bit of niggle in him. A long time coming.

Also noticing plenty of man love between Green and Mannering. I hope Blake will be alright next year!

It would be really great if we could start contesting offensive bombs.

Surely Lawton would be more versatile as an injury-only 17th man? Would rather have another big boy myself, but I guess that depends on whether our forwards are setting the platform for Jazz to play as the rangy forward that Kearney wants.
Last edited: Aug 10, 2018
Reactions: D1zWarz, Hazman, Johnnyray and 11 others

Now we're in the finals. Time to believe!

2018, the year we stopped being mud.
Reactions: dantheman, DallyM, Hazman and 8 others

i love that Roger Tuivasa-Sheck over shadowed ponga. look i like the kid but the way the media go on about him is sickening.

Roger Tuivasa-Sheck full back of the year and dally m winner has a nice ring to it
Reactions: Billyspleen75, Akkerz, dantheman and 24 others

Contributor
I didn't mean a C, I pressed A but my phone threw a wobbly
Reactions: Lord Gnome of Howick MBE, Mack 10, DallyM and 5 others

After 7 long years those finals are calling us...….ohh im getting a tingling in the loins!
Reactions: D1zWarz, Hazman, Sup42 and 9 others

Contributor
Good on ya boys. 1 more win i reckon warriors need to be safely in the 8.
Reactions: Hazman, jonesy101, Sup42 and 5 others

Well this is weird.... doesn't this team start their end of year losing streak around this time of year?
Reactions: ACT Warrior, Lord Gnome of Howick MBE, D1zWarz and 10 others

I bet the game plan was be patient be patient.
A wins a win but I still felt hungry we coulda shouda scored more tries couple of screw ups in attack.
Reactions: D1zWarz, Hazman, Defence and 3 others

Contributor
Really dominant go forward, spine given a dream ride and did bugger all with it if we're being honest. Though they were offside on their line everytime. Cecchin leaving won't hurt us.

Defence good which is always the most important thing with the woe woes and never looked troubled so good job.
Reactions: D1zWarz, Hazman, Sup42 and 9 others

Citygirl said:
I didn't mean a C, I pressed A but my phone threw a wobbly
Click to expand...

I like that. I will borrow this for when I accidentally drop the C bomb.
Reactions: Mack 10, Spence, Sup42 and 3 others

Awesome game .Pity it wasn’t another 6 point win .But who the hell cares .Onwards and upwards . Oh yeah
Reactions: Akkerz, Hazman, Johnnyray and 2 others

Good win by the Melbourne Warriors.

Gavet with his best game for a while.

Back into finals footy with a win for Bully.
Reactions: Iafetas Kickstand Wang, Hazman, Sup42 and 9 others

On this form the Warriors might not be making up the numbers.
Reactions: Hazman, Sup42, Johnnyray and 12 others

wellyboy said:
Good on ya boys. 1 more win i reckon warriors need to be safely in the 8.
Click to expand...

Agree with this.
Reactions: Hazman, Johnnyray and Citygirl

Good game. Expected more points from the dominance we had, but it was bad conditions and a real field position type of game.
2 points guys - guaranteed finals I would say now.
Good job fellas!
Hiku should get more of a run , feel sorry for him - much love for this 2018 team and Kearney , guys a dead set legend.
Reactions: Sup42, Johnnyray, South Island NRL and 4 others

One of those games where the passes don't stick and the ball doesn't bounce our way. At least we won but I still feel dirty on them?
Reactions: Johnnyray

We ran for over 2000 meters tonight, I sense we could’ve doubled our score in better conditions.

Great effort from the boys, sometimes the games your suppose to win prove the most challenging, the Knights are a gritty side no doubt but we were a peg above them and showed we fully deserve to be in the top 8 and play finals.

TBH we looked a little reserved tonight, probably due to the conditions but if it’s a dry track in Sydney next Sunday arvo let’s hope they release the shackles a bit and put on a show like we saw against the Donkeys in Brisbane, with our players we’re a far more dangerous proposition on a fast track.
Reactions: Hazman, Johnnyray, PhilsySH35 and 2 others
Show hidden low quality content
You must log in or register to reply here.
Share:
Share