If Satae signed for the storm no use playing him .
Should be in fox for the rest of the season
Reactions: Swanley, Sledge and YeahNah 4020

Jimi Jones said:
If Satae signed for the storm no use playing him .
Should be in fox for the rest of the season
Click to expand...

If he's in our best 17 for the week, then he should play.
Reactions: Murraytd, Defence, mt.wellington and 6 others

Must say it's a pleasant to change to look at opposition team lists and not have too many opposition players that make me think in a rare moment of no bias: "he's going better than his Warriors opposite, I'd have him in my team". That used to happen very, very often...

We're not the finished article - I hope not, anyhow - but we're building nicely. Few dips and stuff-ups, but no consecutive losses, etc.
Toggle signature
The NRL Video Referee Says "WOOF! WOOF!" As It Taps It's White Cane...
Reactions: YeahNah 4020 and ko wai ra

Reports coming in Roger Tuivasa-Sheck injured his ankle in training. In doubt for Saturday
Reactions: 3rdstriker

We got this - its dam cold down here so all those Manly boys will be sick come Saturday with flu or maybe even hypothermia after today..... Manly beach a distant memory for them at the moment.....
Reactions: Worried2Death, Citygirl, Off The Bench and 2 others

Makasene said:
Reports coming in Roger Tuivasa-Sheck injured his ankle in training. In doubt for Saturday
Click to expand...

I would like to see Fusitua given a go at the back with Beale to the wing. They will probably stick with shifting Hiku to FB. That
Reactions: ttkk19, YeahNah 4020 and Woofa

He made that silly play close to the touchline and his shorts were on back to front, but apart from that I thought Hiku had a decent go at fullback last time he played there.
Reactions: Defence, ShaunJohnson7, Worried2Death and 6 others

Further info on Roger Tuivasa-Sheck injury. It doesn’t look good for the weekend. 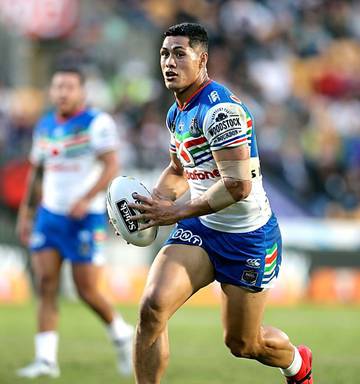 Warriors captain Roger Tuivasa-Sheck is in major doubt for Saturday's NRL clash against Manly in Christchurch.

The 24-year-old fullback took limited part in training this afternoon on a cold and wet day at Mt Smart Stadium, after exiting the field with an ankle injury late in the Warriors' 30-10 loss to South Sydney 11 days ago.

The problem was not initially believed to be serious but Tuivasa-Sheck has been in restricted duties and only managed to get through some light running away from the rest of the side with the rehab group before finishing today's session early.

Backline utility Peta Hiku ran in his place at fullback after yesterday being named to play at centre and it remains to be seen whether the former Kiwi test fullback has to cover the No 1 role against the Sea Eagles at AMI Stadium.

"He had a run today and didn't look so good so we just have two wait and see how he pulls up over the next little bit," said coach Stephen Kearney.

"But we'll try and give him as long as we can but it didn't look real good for him today. But we'll see he could pull up better tomorrow."

The uncertainty over Tuivasa-Sheck's availability comes just as the side welcomes halfback Shaun Johnson back after a month out with his own ankle injury.

The 27-year-old playmaker ran freely ahead of his first game since he was forced from the park late in the round nine win over West Tigers on May 5.

Since then the side has dealt with various reshuffles through the spine, with Tuivasa-Sheck sitting out the round 11 away win over Parramatta while he remained in Auckland with his fiancé, who last week gave birth to the couples first child.

Hiku slotted into the No 1 role for the 24-14 win over the Eels at ANZ Stadium, and made the switch to five-eighth for the following week's game against Souths, after fill-in halfback Mason Lino missed the match with an ankle injury suffered against Parramatta.

We can't catch a break injury wise can we.
Reactions: Lord_m_80, Defence, mt.wellington and 2 others

Onewarrior said:
We can't catch a break injury wise can we.
Click to expand...

We have been unlucky with the spine, but really we only have Roger Tuivasa-Sheck, Pulu and Roache missing from our top 17.
Reactions: YeahNah 4020 and fizurg

Part of the recent inconsistency I reckon has been due to the injuries. Yes attitude and getting out physicalled but still injuries have played a part.

I thought our depth was invincible when Lino played the Roosters rd 4 and Dragons.

razzrillinger said:
If he's in our best 17 for the week, then he should play.
Click to expand...

If he is head an shoulders above the next player I would agree
But he's not
He is our most promising prop .Size wise
But we have more experienced props .
If we were keeping him I'd be stoked .But we are
Not apparently .So no point developing him for the storm
Reactions: Defence and YeahNah 4020

It is very cold down here in Christchurch, rainy and bitter wind, not nice
Reactions: Defence, Worried2Death and Centurion

Dafaq? Didn't we have a bye last week? How did Roger Tuivasa-Sheck get injured?

Came off in the Souths game
Toggle signature
When is the club going to do something about the current situation at the Warriors? My guess mid way through next season
Will the Warriors win another game in 2021?
Reactions: Hazman, leaguejunkie and Dave Brough

He came off in the souths game and besides a lot of injuries occur at training
Reactions: Off The Bench

Roger Tuivasa-Sheck didn't look too good jogging around in the video I saw.

He didn't, mumsie told to keep his ass home with her and the baby, she knows those Christchurch hoes.
Reactions: Sledge, leaguejunkie, Tragic and 9 others

Boys better bounce back this week or I’m opening up the Sack Kearney Thread.
Reactions: Off The Bench, Mr Frank White, Lance155 and 6 others
Show hidden low quality content