Thread to share your thoughts on the Round Bluey game between the New Zealand Warriors and Parramatta Eels after the match. Name your Man of the Match, discuss the coach, captain, starting team, bench, opposition, game tactics, substitutions, errors (or lack thereof), penalties (or lack thereof) highs, lows, refs etc.

the best performance I've seen from this team in a long, long time. customary lapse early in the 2nd half but on the whole the consistent, organised attack and some of the most commited defence I have seen from a warriors team.

Credit too to Para... they threw everything at us but we got the job done.
Really pleasantly surprised.
Reactions: Billyspleen75, fizurg, Jaka and 24 others

We looked.... organised....
Reactions: Bluecat again, Defence, BiggerD and 5 others

Very professional win just went about there business and went through there process. Forwards stood up again and laid the platform Defense was very surprising but happy for the 2 points
Reactions: Raw Power, Jaka, Maddog and 5 others

Poor Eels
4 losses in a row
Fans at 1 eyed eel are loosing it as well.
https://www.1eyedeel.com/

All very good.. Gavet would be my MOM followed by Foran
Toggle signature
http://i.imgur.com/L9DIkwT.jpg
Reactions: Jaka, Glen, kabkram and 4 others

MoM goes to Mannering for me, was everywhere, 170 run meters, 48 tackles with no misses, scored a try, plays injured what more can you do.
Reactions: RobRoyMcCoy, Raw Power, Jaka and 12 others

i would like to offer my body up to our lord and saviour Kieran Foran
Reactions: Jaka, Glen, jonno and 16 others

Danpatmac said:
some of the most commited defence I have seen from a warriors team.
Click to expand...

What brought one of the biggest smilies to my face today was right near the end when Blake and Fusitua shut down an attack on one side line and the Eels shifted the ball right across the field and the left side stopped them on that side - you just know how normally we'd crowd one side leaving the other side open but it didn't happen
Toggle signature
For they were Warriors ..... these mighty men of Valour
1 Chronicles 12:21
Reactions: frankspence, Jaka, Johnnyray and 7 others 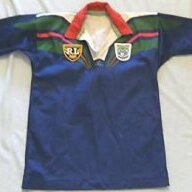 Very good first half, followed on from last week but against a better team who had a full bench. Did enough in the second and crucially, didn't allow a crap first ten minutes to ruin the rest of it. Big, big credit to the Fusitua/Sheck corner tackle on Radradra, the whole game really could have gone another way if he scores, and he does in that position nine times out of ten.
Reactions: fizurg, frankspence, Jaka and 5 others

WOW! what a massive difference to a couple weeks ago. Foran is sent from god for us warriors fans. He has lifted this team and credit to the spine. Worked really well and Johnson is playing awesome. He doesn't get enough credit from us fans but hes been good this year despite what the media want you to think. Everything Foran does is pure class, i hope Ata is learning everything he can, hes got a good opportunity to learn from one of the best
Toggle signature
Nathan Browns' Consultant
Reactions: Raw Power, Jaka, Glen and 8 others

Wow, we have killed off the lagging behind at the start of a season...

Six rounds gone and we are in the hunt.

ramps said:
WOW! what a massive difference to a couple weeks ago. Foran is sent from god for us warriors fans. He has lifted this team and credit to the spine. Worked really well and Johnson is playing awesome. He doesn't get enough credit from us fans but hes been good this year despite what the media want you to think. Everything Foran does is pure class, i hope Ata is learning everything he can, hes got a good opportunity to learn from one of the best
Click to expand...

When Parramatta scored on our left side in the second half it was Foran still chasing across for the tackle...alone...sometimes it is almost like our guys are trying to hide from tackling...the NRL website says Foran led us to victory...he was the difference but my MOM was Roger Tuivasa-Sheck.
Toggle signature
Trainspotter
Reactions: gREVUS, David James, frankspence and 4 others

Will Foran, Johnson, Luke and Shrek steer the team to a grandfinal?!?!?!?!?

Is Fusitua the NEW Radradra?!?!?

In fact is it too early to celebrate our team coming back from the dead?!?!?!?!?

Yep I am starting to eat humble pie and am happy to do so, I am still using a small fork, shutting down their edge attack was very pleasing to see, and the forwards running in pairs, I am still put off seeing Cappy there and claiming some sort of kudos, but lets go to Canberra and show them what we are made of.
Reactions: BeastMode, Johnnyray, Afakasi247 and 4 others

Not sucking dick tonight!
Last edited by a moderator: Apr 10, 2017
Reactions: Afakasi247, frankspence, AlexM and 13 others

Eels have a big saturday night out on the town? Been a while since the warriors were the sharper looking team full of energy, repeatedly kicking to the sideline when your trailing isn't a good sign.

A good day for the footsoldiers of the team, Ken, Blake, Bodene, Solomone having their best games of the season.

General Foran with the decisive play.

Wasn't thrilled with Roger Tuivasa-Sheck not going to ground which led to the 2nd try, but its one mistake.

Bundling Semi into touch probably the other key play, was sure he'd finish that.

Another quiet week on the forum - there's not as much to talk about when the team just goes through the "processes" and gets a win at home.
Reactions: Raw Power, brightman and Defence

Bring Matulino in for Gubb and it is looking like a good side. If we can keep key players fit I think we could finish somewhere in the bottom half of the 8.
Reactions: Donal, Maddog, Defence and 2 others

Marker defense was strong today. Lisone came up with a couple of tackles that could have been very dangerous otherwise.

Spine looking so dangerous and I wouldn't even say they've clicked yet.
Reactions: frankspence, Donal, Afakasi247 and 4 others

eudebrito said:
Wasn't thrilled with RTS not going to ground which led to the 2nd try, but its one mistake.
Click to expand...