There's a key skill that's lacking from our team. It's play selection.

Some times it's better to die with the ball and get a quick PTB than to push the miracle pass in heavy traffic.

Then when it's on to move the ball, put on a set play ffs. Don't just stand around waiting for someone to do something, run the formations every time. That's the discipline that's lost on these guys.
Reactions: 4 users

See y'all next week for another soul destroying belief defying effortless display of "we aren't working together or holding ourselves or each other accountable" gotta wonder why we still support our beloved and behated group of individuals wearing the same clothing.

Like a junkie ready for the next hit of bad homebake crack cocaine.

From a loyal yet mindfucked supporter.
Reactions: 16 users

Don't worry guys when State of Origin starts the team will go on a winning run. Build everyone's hopes up that maybe this season is different. And then just like every year fade away at seasons end.
Last edited: Mar 26, 2017
Reactions: 5 users

mt.wellington said:
Pretty sick of this shit. The backline fucked up almost every set piece they tried. They couldn't catch aids fucking around Ethiopia with no condom! Sure no Foran was a huge loss but that's no excuse for the amount of dropped ball and lack of support for the ball carrier.

The way we are headed we won't even make the 8.

Arghhhhhhh so frustrated right now. Close to taking a break from this team so I don't end up at the end of a rope up a tree...

Your not alone bro, in fact I feel like writing a letter to Dole, and asking him to read it to the team from us, the bloody loyal FANs that have stuck with this club for 22 years.

I have just deleted the rest of my post before posting it, as there were far to many swear words in it !!!

Gavet - strong runs, quick play of the ball, good defense. Laid the platform for Luke's try. Shifted the momentum after a 20-2 deficit.

Lisone - energy off the bench. Strong runs. Quick play of the ball. Impact similar to Gavet. Catalysts for shifting momemtum after slow start.

Shaun Johnson - been our best this season. Doing everything by himself. Wasting away what could be a career year for him.

Maumalo - strong runs. Improving his wing position. Confident under the high ball. Continuously showing effort. One bad pass to Roger Tuivasa-Sheck (could see the thinking - tactic was to kick and rush him so he shifted it back infield for Rog to take advantage of holes). But Fuck what dey say - Kearney stick with this guy he's getting there.

Sao - Good runs, improved our speed around the ruck along with Gavet and Lisone.

Fusitua - few bad errors in second half. Bombed scoring opportunities in several occasions. Benefit of doubt after a consistent season so far.

Roger Tuivasa-Sheck - looked tired in second half. Bad defensive efforts. Couple errors as link man. All u uncharacteristic besides his D. He will bounce back.

Mannering - Few poor defensive reads in first half - at worst Let Dugan waltz by for a try. Possibly hooked by Mooks for it (doubt it but why him not Hoffy?) But a off game for Juju isn't really that bad as overall he was still a rock in the middle for the most part.

Gubb - Won't say much but he's out of the team for good I reckon. Only came back on in last 5 mins. Laters.

Lolohea - didn't look out of place at 6 but didn't do anything to help the cause either. Selfish decision to kick for himself on 4th tackle. Hard done by after what seemed like a try saving tackle. Otherwise he's out of the team by virtue of a demotion being long overdue.

Kata - I love kata but not the 2017 version. Teams have figured him out but he hasn't done anything consistently to counter that. His pass to Maumalo was a start but too little too late. Problem is his depth replacement Ayshford was equally as shocking the today.

Foran or no Foran we had opportunities to win.

This is a collective problem - the amount of times our set plays amounted to dropped ball or poor decision making was too common.

It feels We are going backwards but I have no idea why.

But the players lack of confidence and initiative is fucken crippling us.

Lack of workload from forwards means some one like Roger Tuivasa-Sheck wastes energy hitting up the ball. Tonight was the first time I've seen him look tired in a game.

Kata has regressed badly. I'd love to see how Maumalo goes with a pass first centre next to him.

Gavet, Lisone And Sao played how forwards should. Gubb can get fucked and I wish our stocks would let Lillyman join him.

Need a heathy Matulino but far from that.

Something's not right this season - I have full faith in Mooks and co. But none in the players.

Unfortunately the ball drops with them despite what Doyle haters think.
Last edited: Mar 26, 2017
Reactions: 10 users

We need all our games to be late Sunday night. It means we get to enjoy our weekend before the team fuck our 1st day back at work.
Reactions: 12 users

Gavet was the best Warrior on the field. Mannering, Sao, Lisone and Shaun Johnson also played well but other than that the rest of the team were pretty much rubbish. Gavet needs to start next week and keep Sao on the bench. Gubb needs to be dropped (forgot he was even playing he was that invisible) as does Lolohea who seemed to only make mistakes.
Reactions: 1 users

All ways look on the bright side of life"..fuck I can't find anything right now.work tomorrow.you pricks
Reactions: 2 users

eric said:
Dude please tell me you're either high af or taking the piss
Click to expand...

Matulino's Left Shoulder said:
I'd go gay for a week for a Warriors win
Click to expand...

It would only be through Shaun Johnson so is it really worth thinking they are improving
Reactions: 1 user

That show is such shit, no truths spoken, they are all brothers, the old boys club.

I had money on dragons, easy money but still feel sad, just like watching a slow death, shit at start, make comeback then error after error and fade away, could script it
Reactions: 6 users

Akkerz said:
Luke averaging 6 runs for 56 mtrs. That's more than a little bit off. Not just picking on Luke.
Click to expand...

Why not? He is getting paid enough. If I was playing for free and played like that I would be criticised.

Lolohea is just ignorant about the game. Fourth tackle on attack in front of the posts and he kicks it with no chasers...dead...and they score on the seventh tackle in reply. Stan Martin stand up and take a bow, if anybody believes you have a club lined up for Tui you are the funniest clown I have ever heard of.
Reactions: 8 users

My boy is playing fullback for his U8s team this year so I got him to watch Roger Tuivasa-Sheck in this game. Roger drops the ball, misses Vaughn for the first try and gets stepped by Dugan for the next try then drops the ball again. And he was one of the better Warriors players today. And he's the captain!

I had to send my boy away 20 minutes into the game so he wouldn't learn any new swear words that he hasn't already heard from me in previous games. He also doesn't want to be a fullback now either. Thanks Warriors!
Reactions: 10 users

Selector said:
Don't worry guys when State of Origin starts the team will go on a winning run.
Click to expand...

You are dreaming, this outfit would have trouble in reserve grade.
Reactions: 1 users

The worst thing about Foran not playing was that it meant Ayshford did (had one of his shockers).
Actually I shouldn't single him out, they were all shit.
Shaun Johnson had his moments but was playing a lone hand as per...
Gavet and sao took their chances too- made a good case for bringing up a couple more so called depth forwards.
Farked if I know what to do with that back line.
What an outfit.
Reactions: 5 users

Viking said:
My boy is playing fullback for his U8s team this year so I got him to watch Roger Tuivasa-Sheck in this game. Roger drops the ball, misses Vaughn for the first try and gets stepped by Dugan for the next try then drops the ball again. And he was one of the better Warriors players today. And he's the captain!

I had to send my boy away to watch cartoons somewhere else so he wouldn't learn any new swear words that he hasn't already heard from me in previous games. He also doesn't want to be a fullback now either. Thanks Warriors!
Click to expand...

The moderators should look at your post, it is obscenely true.
Reactions: 1 users

you win you get paid

you lose you get fuck all!!
Reactions: 1 user

Maybe Stephen Kearny has to try a different line up. Sit back and enjoy another season boys.
Reactions: 1 user 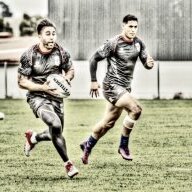 "Kata has regressed badly. I'd love to see how Maumalo goes with a pass first centre next to him."

¿N. ig-mah¿ said:
Daryl Halligan wished Tuivasa-Sheck good luck for next year. He sees what I see for this year.
Click to expand...