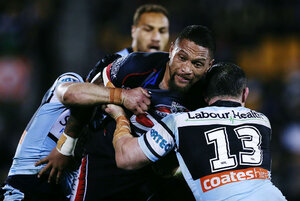 ​
NZWF Official thread for the 2017 Round 21 Warriors team list and discussion...

Same team again I'm picking. He announced it at the Press Conference with his call about how it was a good performance....

That fact that Kata loves stop the sliding defense from sliding and leaves an overlap out wide at least 4 times a game means nothing to him.

"Hay Kata you Muppet, instead of running around in circles whenever they have numbers on you, stay on your opposite center for a little while longer and yell SLIDE, SLIDE, SLIDE at your team mates."

Too long to yell out at the stadium? I'll just stick to "Kata you Muppet."

That's if I can be bothered going at all that is. Why leave the couch when the beers much cheaper from the fridge?
Reactions: BiggerD

Ligi Sao...........I don't hate or love him so if there was a suitable replacement that would actually get some decent mins I would be happy with that also.

Yep, unchanged as everyone was picking. Let's hope SK has a flash of inspiration later in the week and swaps out Kata for Charnze Nicoll-Klokstad.

zaggo said:
Yep, unchanged as everyone was picking. Let's hope SK has a flash of inspiration later in the week and swaps out Kata for Charnze Nicoll-Klokstad.

Come on Watson, open up your chequebook and get us a decent coach!!!!
Reactions: demco, Hadyn, Johnnyray and 2 others

Contributor
Season's gone anyway but wtf is going on with this outfit. There is absolutely no reason Kata should be named this week - or is he a pet project in your process?
F U Kearney. If you want the team to respect you.. start respecting the players who have busted their guts to try & make a difference.
Reactions: demco, ShaunJohnson7, Beastmode and 3 others

Charnze Nicoll-Klokstad was 18th man last week and was actually on the sidelines in his playing kit.

Regardless, SK is showing Kata some sort of faith...I fucken hope he tore him to shreds in the video session at least.
Reactions: Johnnyray and eudebrito

After just listenning to SK on radio sport and his continued selection of KATA confirms my belief that we will never make the top four with him in charge..dumb and dumber...
Reactions: demco, ShaunJohnson7, Lord_m_80 and 3 others

Wonder what Watson and Doyle are actually thinking ?
They have hired a total 100% fuckwit who has a PROCESS that only he knows about, OR they have hired a middle of the road coach who has the team playing a structured game but the games haven't gone their way because of refs bad calls, players getting injured, opposition team were really lucky cause we let them back in the game OR my kids like the way he talks , it gets them of to sleep before the matches start.
Reactions: demco, Lord_m_80, Johnnyray and 3 others

Afakasi247 said:
Regardless, SK is showing Kata some sort of faith...I fucken hope he tore him to shreds in the video session at least.
Click to expand...

You know he didn't. They probably had an honesty session and talked about their feelings then all the players promised to try really hard on Friday. And Kata promised he would try really really hard ..... to score from dummy half, cos he can't pass.
Last edited: Jul 25, 2017
Reactions: demco, Crusader26, ShaunJohnson7 and 9 others

sighhh... different week...same shit choices. Oh well got a concert to go to on Friday night so at least I can fast forward through all the tries down Katas side once I get home
Last edited: Jul 25, 2017
Reactions: Raw Power, Johnnyray and Miket12

Afakasi247 said:
Charnze Nicoll-Klokstad was 18th man last week and was actually on the sidelines in his playing kit.

Regardless, SK is showing Kata some sort of faith...I fucken hope he tore him to shreds in the video session at least.
Click to expand...

I normally back Kearney, but picking Kata again I just cannot understand. The kid is not a FG centre and we have other options.
Reactions: Lord_m_80, Raw Power, Johnnyray and 2 others

Contributor
I don't care any more
Reactions: Stalefish540, Johnnyray, Tedster and 2 others 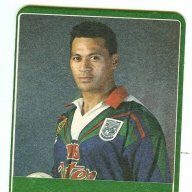 Reactions: Crusader26, ShaunJohnson7, Lord_m_80 and 10 others

these muppets have to be made accountable for continued poor performance....If kata and Sao run out this weekend im about done with this club
Reactions: ShaunJohnson7, Johnnyray and Bluecat again

The game is on Friday? Guess I'll be missing it - and I'm quite OK with that, as sad as that is.
Reactions: Off The Bench, Raw Power, Johnnyray and 1 other person

Jordan G said:
The game is on Friday? Guess I'll be missing it - and I'm quite OK with that, as sad as that is.
Click to expand...

Friday night games are a lot easier to swallow when its a home one for myself. Just get hammered and head into to town. Great night out. The games merely the entree...
Reactions: ShaunJohnson7, Lord_m_80, Raw Power and 2 others

Man I wish I could work at the Warriors.

Accountability does not exist!
Reactions: Crusader26, Off The Bench and Raw Power

Tylz said:
Man I wish I could work at the Warriors.

JD talks about it a lot, and he made Dean Bell accountable for some poor recruiting. Go figure.
Reactions: demco, Akkerz and Raw Power
Show hidden low quality content