​
NZWF Official thread for the 2016 Round 15 Warriors team list and discussion...

With Lillyman called into the Queensland side for Wednesday week’s second State of Origin match, rookie prop Toafofoa Sipley (21) has been brought onto the bench for his second NRL appearance.

And 2015 rookie Ken Maumalo, who has his 22nd birthday on Thursday, has been called up for his first NRL appearance of the year replacing Vatuvei.

The club’s veteran try-scoring record holder picked up a hamstring strain early in the second half of Saturday’s 50-14 win over Newcastle and is expected to be sidelined until round 17 (Gold Coast) or maybe after the club’s round 18 bye.

After making an impressive NRL debut against St George Illawarra on May 1, Sipley has maintained his form with the Stacey Jones-coached Intrust Super Premiership side now on top of the table.

Maumalo played eight NRL matches last year but, apart from being the NRL team’s 18th man against the Dragons, he has been on ISP duty until now. He has scored nine tries in 10 matches this year averaging 143 metres a game.

The Vodafone Warriors will be without a combined total of 437 NRL games with Lillyman and Vatuvei absent but they gain two monsters in Maumalo and Sipley.
Raise your scarf, like Roger, as your team take to the field.

Nice, will be very interested to see both these boys get a go.

Would have liked to have seen Gavet in for Gubb, but not too worried.
Reactions: Fazz, Nahz and koolkat

Awesome, Both changes I've been looking forward to seeing.

Bit worried with the Kata, Maumalo defense tbh, but im sure Maumalo is going to have a big game. Its gonna be good weekend of sport!!!
Reactions: mt.wellington and 3rdstriker

Was hoping for Wells on the wing but happy to see big Ken getting another crack. Looking forward to see more of Sipley in FG.
Last edited: Jun 14, 2016
Reactions: frankspence, warriorsfan92 and Freddie Futler 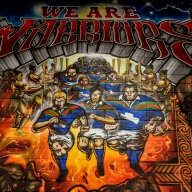 Happy to see Ken Maumalo and not Jonathan Wright.
Reactions: Glen, Pete, Warriors95 and 13 others

So happy for Lillyman to get the call up because it gives the opportunity for Sipley to stake a claim.

Something these young guns need to take onboard is "Don't you ever let a chance go by oh Lord" oh! wait a moment isn't that the Newcastle song.

Trugoy said:
Was hoping for Wells on the wing but look forward to Ken getting another crack. Good to see more of Sipley.
Click to expand...

Unfortunately I think the cap will not allow us that privilege, and I am guessing that includes Sao.

Lillyman playing for QLD is a blessing in disguise. It allows Sipley to come in and show us what he's capable of doing.

It could push Gubb out should he really make some impact with go forward.
Reactions: StephenDedalus, FAN and diehard

kbazi said:
Lillyman playing for QLD is a blessing in disguise. It allows Sipley to come in and show us what he's capable of doing.

It could push Gubb out should he really make some impact with go forward.
Click to expand...

If Sipley pushes hard to be included again after the Roosters game, I'd say that (barring injury) it would be at Gubb's expense.
Reactions: FAN, mt.wellington and Freddie Futler

Good team, we really need to win this game.
Reactions: FAN and Off The Bench

Freddie Futler said:
So happy for Lillyman to get the call up because it gives the opportunity for Sipley to stake a claim.

Something these young guns need to take onboard is "Don't you ever let a chance go by oh Lord" oh! wait a moment isn't that the Newcastle song.

Freddie Futler said:
Unfortunately I think the cap will not allow us that privilege, and I am guessing that includes Sao.
Click to expand...

Yeah i find that 2nd tier stuff quite confusing. It's a shame for Wells.
But Sao's already played FG this year.
Reactions: Freddie Futler

With no Roger Tuivasa Shek to play left side with Maumalo and Kata, there will be no cut out ball to Maumalo.

There will be no ball to Maumalo period.

I hope he doesn't mind playing a cardboard cut out for Kata that holds his wing opposite honest enough to give Kata lots of free Try's.

The other thing young Ken has on offer is the chance to be the Warriors crash test dummy.

Good luck son. Its a shit fest noone apart from Hoffman has the balls to run out of the Warrior forwards.

Pretty much welcome to the worst job at the Warriors and I feel sorry for you you poor cu**.

No glory on offer coz his center will hog it.

Smash fest expected of him otherwise he will be measured as inadequate when compared to the Warriors greatest forward who never was...the beast.

If Cappy had the balls.

Meh if I had the remote control.

Fusitua would get shifted to the deadzone next to Kata this week just to prove a point about what a fucken waste of a genius finisher he would be next to mr greedy...

Maumalo would get that coveted right wing spot next to the Warriors best assist player just to prove what he can do with a real center.

Maumalo will be targeted as the weakest link in defence of the Warrior edges....another reason it is unfair to play him on the shittest defensive edge.

Fark I hate the Warriors backwards thinking about finding the next most destructive running back.
Last edited: Jun 14, 2016
Reactions: Glen, Akkerz, Xfactor and 9 others

Not sure about those calls.

That bench looks scarily inexperienced - and if the Roosters are one thing, it's experienced up front. They'll know how to take advantage of that.

Really iffy on the Maumalo call too - a Maumalo/Kata axis gives me no confidence in defense, I'd much rather have gone with Allwood, who at the very least was showing enormous aggression in D. Can't switch Fusitua across though, Blake is far too good a distributor and Fusitua FAR too good a finisher to break that combo up - we'll get points regularly from that edge as that combination develops, especially being fed by Shaun Johnson.

Those calls could both go either way, but they definitely worry me.
Reactions: Johnnyray and Freddie Futler

Sup42 said:
Pretty much welcome to the worst job at the Warriors and I feel sorry for you you poor cu**.
Click to expand...

I get your point but pretty sure he's stoked to be in first grade bro. Don't feel too bad for the guy
Reactions: Defence, frankspence and Sup42