All I got to ask is why the Fuck Cappy name

Just to have Fusitua/Wright play on opposite edges?

What ever the reason.... Ayshford and Fusitua could be the best thing to happen to Fusitua. Will we actually see his full potential?

Leuluai was sufficient. But I was a bit negative about his defence when he was out wide.

Gubb is surely worth trading to the Bulldogs as a bonus to go with RFM.

Wright played way better than I believed he was capable of. I acknowledge and show more respect than my earlier comments.

Bully. No subs tonight bros. Even a bit of a Michael Jackson at the end.

Mannering. So selfish hogging all the tackles again. Let someone else have a turn juju.

Captain happy again. Nod of approval coupled with the head lean of quite surprised.

Muttz. I think I'm extra critical of our man here because I can see so much more potential and dominance in him. Solid effort.

Fusitua. Congrats on the try and positive kick returns.

Lisone. Good energy after his following Gubb into a not fight against Manly.

I can see it now:

mt.wellington said:
Very happy with that win. Warriors never make it easy on themselves or us fans but we got the 2 points and thats all that matters.

Still a lot to work on. Defence was off particularly on the right edge and Charlie Gubb being caught in no mans land.

Great to see our top two props aiming up. Bull, Ben and Lisone played a great game and sure enough we look instantly better on attack.

That Tuimoala is so insanely gifted. Slots in at centre, five eight and fullback seamlessly. What a talent...
Click to expand...

Bro Tui and Shaun Johnson together is what I've had a hard-on for since beginning of last season. People dissed Tui after the Kiwis disaster and the Warriors meltdown. But both times he was put in the deep end. First time given a good halves partner he shines. Even when shifted to fb.

I have noticed this year Shaun Johnson playing dummyhalf a lot. It's interesting. It's like they're trying to be less predictable in the halves. You don't know if Luke will play distributor or first receiver. Same for Shaun Johnson. Our spine is quite fluid.

Shaun Johnson ran the game well. Kicked into the corners most times. However I did think on the penultimate set he should have put the ball dead or hoisted it high to make them sweat. Instead he gave them a chance and gave me a heart attack.

Horriors2013 said:
People dissed Tui after the Kiwis disaster and the Warriors meltdown.
Click to expand...

BiggerD said:
I am sure Roger Tuivasa-Sheck will be back soon.
He is one player that the coaching staff would say to
"If you feel a niggle, come off"
Click to expand...

I dunno bro. He don't come off for nothing that guy. I reckon 6 weeks plus . But I hope you're right.

We got a little lucky that the Doggies were so undisciplined, however usually we follow a team down that hole and/or can't convert their penalties into points. Well done to the boys for being able to both play some high percentage footy AND score points when we got the opportunity.

Still some stupid decision making and handling letting us down in crucial situations, and some shithouse D. But tonight we managed to outscore the opponents - barely.

May Robson never be seen in FG again. We can sacrifice him for a positive outlook for Roger Tuivasa-Sheck.

Onya boys, you definitely put in tonight, so I'm stoked for the win.
Reactions: 1 user

Shaun Johnson looked like a real heads up, classy halfback tonight, he had time to put in excellent general play kicks because he had decent front foot ball, he chose the right play at the right time nearly every time, and was defensively strong...amazing what happens when his pack gives him time.

TL is exactly what we need in a 5/8 at the moment, he was very strong defensively and is a very reliable link man...Tui is crazy talented no doubt, but i shudder to think what would have happened if he was defending inside Kata, the dogs had obviously planned to attack that edge going by the numbers they were stacking out there on attack...some of their tries were things of beauty.

How many tackles did Gubb miss in a row in that first half...pathetic. Vete please.

WE DID IT cu**s WE WON A FUCKING GAME!

NOW PLEASE FOR THE LOVE OF GOD WIN AGAIN.

WHERE ON THE HIGHWAY TO FINALS!!

Whoever the fuck said Lueluai doesn't distribute to Shaun Johnson can go jump off a carpark building, and next season when he returns to England Hingano can fill the 6 jersey and our own James Roberts v2.0 can slot in at centre.
Drop Gubb bring back Gavet!
Reactions: 3 users

Hey guys first post here, long time reader.
Just a couple of things..
Vete should be in for Gubb. I believe he try's hard but just doesn't cut it as a first grader. Adds nothing on attack and his air swings are going to result in tries against us soon enough.
Tommy was great at first five when he came on.
Tui is a star no matter where he plays. The way he slotted in at the back was brilliant.
Anyone else notice on the pre game to last nights game on Fox here in oz that 2 of the panel (I think Hindmarsh and Matty Johns) rated him as one of the top 5 players in the game in 5 years time. Dude is brilliant.
Lisone killed it tonight. Best game in first grade.
Johnson was the maestro tonight. Not perfect but back on track to being the controller out there. Think we've seen the last of The Robson experiment.
Do think the Dogs looked a tad lethargic throughout, maybe down to the travel and short turnaround but I'll take the win and the better attitude from the boys is encouraging.
Reactions: 14 users

mt.wellington said:
No mention of the Peoples Champ???
Click to expand...

Jonno scored a try only Manu could score.
Reactions: 10 users

Angus Young said:
WE DID IT cu**s WE WON A FUCKING GAME!

NOW PLEASE FOR THE LOVE OF GOD WIN AGAIN.

WHERE ON THE HIGHWAY TO FINALS!!

But yes it was good...
Reactions: 5 users 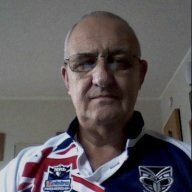 Lolohea is a must in the spine. Game breaker sign him up before a big offer lures him away.
Reactions: 3 users

Much better than last week. Now the key thing is to be able to back that effort up for the next 10-15 weeks. Tough ask I know but is what we need to expect if we want a successful season.

Johnson looked a lot better tonight. Probably motivated to make up for last week and the added responsibility being moved back to 7. Again we need to see that for the next 10-15 weeks.

The spine was looking good before Roger Tuivasa-Sheck went off. One of the bonuses of having Lolohea in the side and TL on the bench was we could cover an injury to an outside back pretty comfortably. Yes it was a shame after finally moving to the halves Lolohea only last 15 minutes there but he moved to fullback seamlessly and had a fantastic game.

Great having Bodene back; carried on his form from earlier in the year. He has definitely been missed. It must be great for Johnson to have him out there next to him. He runs hard into space or he can just dump the ball onto him and set up the next play.
Reactions: 1 users

snake77 said:
Much better than last week. Now the key thing is to be able to back that effort up for the next 10-15 weeks. Tough ask I know but is what we need to expect if we want a successful season.
Click to expand...

I thought I did pretty well with my weather reports... But I could have added some more local pics of Wellington...

Some stuff to work on...
Reactions: 2 users

if Roger Tuivasa-Sheck is out id liked to see henare wells get a run off the bench or play fullback &Tui back to 6 & Manu to the forwards
Reactions: 5 users

Diesel said:
Who gave Lolohea a rating 1? Is Jeff Robson on here?
Click to expand...