This Saturday Pepper Stadium will see the coming together of a team clinging to their last chance of making the finals, and one that is pretty much now just playing for pride in 2015.

Both the Warriors and Panthers share a common reason for why sit as low as they do on the Telstra Premiership ladder, with injuries continuing to cruel the campaigns of both sides.

The casualty ward at Penrith currently houses 10 players, while the Warriors have seven out.

The Panthers head into Saturday off the back of five straight losses, and produced a dour effort in losing 10-6 to the Eels last up.

But coach Ivan Cleary has made only minimal adjustments, with the experienced David Simmons coming in on the wing for Waqa Blake and Bryce Cartwright and Sika Manu swapping between the bench and back row.

Last week the Warriors suffered their heaviest defeat since May 2013, and given the way they performed in the 36-0 loss to the Dragons it's not surprising to see they have a number of changes.

Veteran prop Sam Rapira comes into the team, while Raymond Faitala-Mariner is promoted to the back row in place of the suspended Ben Matulino.

Ryan Hoffman returns from a calf injury, which sees Sebastine Ikahihifo drop out of the team, while Konrad Hurrell replaces Siliva Havili on the bench.

Watch out Panthers: Heading into Round 23 the Panthers are tied with the Dragons for the fewest tries scored in the Telstra Premiership, averaging just 2.9 per game. Only three times this season have Penrith managed to score more than 24 points in a game, and this week they might be one of the few teams in the competition whose attack could be worse than the Warriors'.

Desperation can do funny things to NRL teams, and this week Penrith face a mob who are almost certainly facing a must-win situation. Despite their injury situation and awful form of late, the Warriors have shown they have the talent to blow teams away in 2015, and they will surely be pumped for this one.

Watch out Warriors: The Kiwi side has a serious problem right now; they aren't very good at stopping points and are even worse at scoring them. It is very hard to win games in this competition if you are below par in both of those categories, and in the Warriors' past four games they have scored just 26 points (averaging out at 6.5 per game), and conceded 110 (averaging out at 27.5 per game).

Earlier this week coach Andrew McFadden came out and openly admitted that some of his players who took the field against the Dragons weren't up to NRL standard. That might spur the squad on to prove him wrong this Saturday night, or it might be another kick in the guts for a team already critically low on self-confidence and belief.

Key Match-Up: Elijah Taylor v Simon Mannering. The two Kiwi tackling machines will skipper their sides this weekend, and their clash in the middle of the park will be crucial to the eventual outcome of the game. Don't expect the pair to come together too often, but their clean-up efforts and overall work ethic on defence is top class, with Taylor averaging 50 tackles per game and Mannering 46.

The History: Played 34; Panthers 18, Warriors 15, drawn 1. Penrith have enjoyed a positive recent record against this week's opponents, winning four of their past five encounters. But the Warriors can take some comfort from the fact that they have won seven games against the Panthers in Sydney.

What Are The Odds: Not exactly the biggest betting game of the weekend, but Sportsbet punters have placed twice as much money on the Panthers in head-to-head markets.

Did You Know: This will be the second time in less than a year that the Warriors have faced the Panthers in a crunch clash where their finals hopes could be on the line. In Round 26 last year the Warriors went down 22-6 to Penrith, a result which ultimately saw the Kiwi side miss the top eight by 13 differential points.

The Way We See It: Both sides have had a month to forget in terms of their results, and still have a number of key stars missing. But it's tough to see this Warriors side being able to travel away to Penrith and come up with the defence, or attack, required to get victory. Penrith to have the edge and win by eight.

The two teams worst hit by injuries this year.
Both still able to field half decent forwards packs- those backlines tho... Yuck.
We'll probably win this just so they can string us along for a couple more weeks.
Reactions: goldcoast-warriors-fan

Time to pay up on my 20 years of faith boys 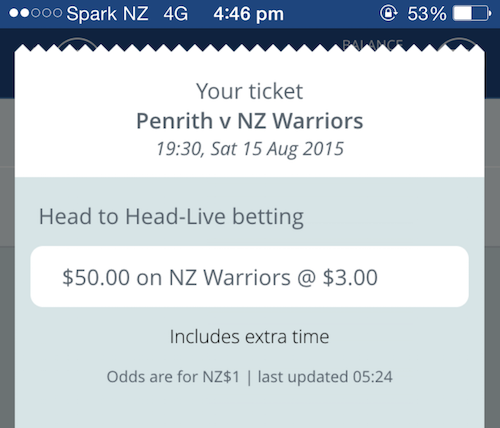 Matulino's Left Shoulder said:
Time to pay up on my 20 years of faith boys

Not something that I want to do either, cause Union fucken is boring... but their my national team, and they'll play with some guts...
Reactions: Stylez Davis, koolkat and Off The Bench

I had a feeling ET was shaping as Penriths next long-terrm Captain. Guess its no surprise considering that cleary wanted him over there and how similar to mannering he is. Anyone know if wallace has officially retired yet? if he has then i guess it's ET's job for good.

I don't care what happens other than please shut down the Segeyaro double from close range!
Toggle signature
This is an opinion. Please treat it as such.
Reactions: Stylez Davis

Coach should lay down some extreme punishment to anyone who falls for a segyaro dummy...
Reactions: Stylez Davis and Matulino's Left Shoulder

Cartwrights offload needs to be shutdown, could open us up!! Will be interesting to see koni come off the bench! I hope he comes out firing after being dropped for the people's chump last week.
Reactions: Off The Bench

goldcoast-warriors-fan said:
Coach should lay down some extreme punishment to anyone who falls for a segyaro dummy...
Click to expand...

Reactions: Off The Bench, jonno and goldcoast-warriors-fan

goldcoast-warriors-fan said:
Coach should lay down some extreme punishment to anyone who falls for a segyaro dummy...
Click to expand...

Coaching manual to the head should do it..... Oh wait it's probably only a page long so won't do any damage.
Reactions: Off The Bench

Theoretically, with panthers bench, we should destroy them, but as we know, stranger things than Around the twist, happen..

Game day must be why I have this sinking feeling in my chest.

Hopefully we don't play them into form as well. They have been pretty horrible recently hopefully we do what got us into some for a month or so back and minimise our mistakes and everyone is embarrassed about the Dragons performance and are motivated to make amends.

McFadden while interviewed during the week Townsend has been too much. Hopefully we see more play going through Lolohea. He's the future we need to let him guide us around more and see what the kids got.
Reactions: Defence and goldcoast-warriors-fan

If we win this game it doesn't really mean anything... The Panthers have lost their captain and 9 other players to injury, while we have 7 out...

It's pretty much a reserve grade game with some FG players sprinkled in...

But if the efforts there this week then it means they definetly threw last weeks game v the dragons to try and get Cappy booted out of the coaching box...

Gona be interesting to see if the Coach wins one of these battles for a change and the players all come out after half time fired up...

How fucked is our club ATM..

One of our supposed "leaders"
Thanks for the "leadership" when the young fellas need guidance at this crucial time of season.

Please don't come back.
Reactions: Johnnyray, BeastMode, Hadyn and 2 others

We win this will we be equal 8th again with dragons? I know our differential sucks hairy balls but, there is a slight chance we can still make it.

goldcoast-warriors-fan said:
We win this will we be equal 8th again with dragons? I know our differential sucks hairy balls but, there is a slight chance we can still make it.
Click to expand...

no, because of the differential, we wont be.
unless the Dogs get hammered 0-50

Matulino's Left Shoulder said:
no, because of the differential, we wont be.
unless the Dogs get hammered 0-50
Click to expand...

We'd have to win all of our last games and hope for some very kind results..
Reactions: Matulino's Left Shoulder
Show hidden low quality content