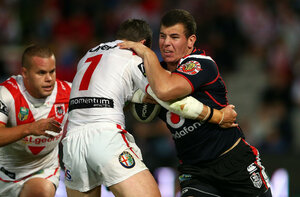 Man of the Match?
How did Tuimoala Lolohea go?
Jonathan Wright?
Did the bench have the desired effect? Charlie Gubb? Sam Lisone? Raymond Faitala-Mariner?
Anyone go to the game? How was the stadium?

Contributor
Disgusted.
another week and another repeat.

The opposition lose key players early.
The warriors have plenty of time on the oppositions goal line
Score is ok, not great, but survivable, half time
Warriors send clones out to play the second half. With instructions to lose spectacularly
Warriors are embarrassing

Im pissed off.
Reactions: snake77, Jah, mt.wellington and 6 others

Contributor
Best thing about that game was the final whistle.

Chad Townsend can fuck off now.

God Im so deflated right now. Need to get a new hobby...
Reactions: Woofa, Akkerz, Lord_m_80 and 32 others

LOL played better with our centres out of position against cronulla
Reactions: mt.wellington, Sup42 and Defence

Wright wasn't all that bad.

Our defense was shit and we lay down at the end. It was a team effort losing that game...
Reactions: Eva

If Cappy swings the axe - I'll back him win or lose. If he persists with whatever this is now - goodbye and don't come back. 10 year dynasty my ass.

Townsend needs to go, Tomkins to the halves.

We're looking like Team NZ in the last 6 races of the Americas Cup. Do not look like winning at all, and like then - I intend to cash in big time.


Which hoodoo was the bigger factor. Dragons since 07? or 2/5000 in NZ away from MT Smart. Or was it just the perfect storm of hoodoo...?
Reactions: Top8, goldcoast-warriors-fan and Defence

Fark .... Feel sorry for the ones who were actually trying out there today
Reactions: Akkerz, mt.wellington, Eva and 2 others

How embarrassing.
Only consolation is that the majority of these guys won't be in the side come round one next year.
Reactions: Maraea

Doyle will be busy this week kicking arses
Reactions: janfin and goldcoast-warriors-fan

wonder what Cappy's excuse will be this week

YEEEAHHHHH...what a brave effort to hold the dragons to under 40 points
Reactions: The Cheap Seats, Maraea, Ever Hopeful and 2 others

bigBeast said:
Fark .... Feel sorry for the ones who were actually trying out there today
Click to expand...

Mustn't feel that bad then
Reactions: Tedster, Defence and tractadrvr

I think what we saw, with another second half sit down by the Warriors, was that they only give 100% when they think they can win. Once the game is gone they stop putting in full commitment and pack up early...

Not a good habit IMO... They should be 100% all game every game. That's how champions play.

Only losers quite on their fans like we saw today...

Doyle can swing the axe as hard and as deep as he want's as far as I'm concerned...
Reactions: The Cheap Seats, Eva and goldcoast-warriors-fan

Contributor
How far have we come in 20 Years? We're not even an enigma anymore. Just a laughing stock. 2 even sides. Both without first choice playmakers after Marshall went off. 17 against 15. And we got our pants pulled down. What a lot of wank that game was
Reactions: Akkerz, Johnnyray, Xfactor and 1 other person

From minute 1-80 I pretty much felt nothing. A few random thoughts.

*Our rookies are really starting to struggle with the weekly grind. No doubt the initial plan was not for them to play this many games games. At least 3 of those tries came directly because of individual defensive errors from Lisone, RFM, Vete. They will get better, that's the silver lining, I suppose.

*Maumalo - the lack of options has left us with our hands tied, but if he's still considered a winger come the start of next season my faith in our development/coaches to recognise talent and where they should be played will take a serious hit.

*Chad. Lol. Such a limited player who looked decent at the start of the year off the back of his running game. Has stopped running = bog average.

*It's ironic we're sponsored by Vodafone considering we can't communicate.

*Increasingly obvious that our ENTIRE attack is centered around the Shaun Johnson/ST combination. Shaun Johnson keeps the defense honest enough to give Tomkins space, Tomkins provides enough of a threat to give Shaun Johnson room to run. Lovely in theory, but when there's nothing else in the arsenal and they only play a handful of games together...tough times.

I blame Hurrell
Reactions: The Cheap Seats, ShaunJohnson7, Lord Gnome of Howick MBE and 7 others

After all these years manus legendary shocker against the eels finally has some competition for worst ever individual effort in a warriors jersey.

I can cop losing, but show some Heart, show some honour in the jersey! These boys should be chomping at the bit to run out with the Warriors Jersey on and put in a good performance. Another season filled with promise only for us to drop our ass when we need to stand up.
Reactions: Eva, koolkat, Stylez Davis and 2 others

dragons had good line speed. we had none

how man y times did we have the dragons pinned in their own 10 and somehow they make it up to the 40 with ease. that in itself is truly pathetic.
Reactions: Xfactor
Show hidden low quality content
You must log in or register to reply here.
Share:
Share