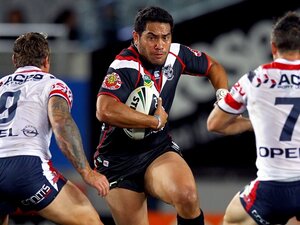 ​
Time to get the beers in, put on your favourite jersey and if youre in town get to the park. Its game day.

Sam Tomkins returns at fullback with Siliva Havili dropping out of the team, Nathan Friend starts at hooker and Tuimoala Lolohea moves to the bench in a slight reshuffle. Jonathan Wright drops out of the team for Konrad Hurrell's return from suspension while Charlie Gubb and Raymond Faitala-Mariner come in for Origin representatives Jacob Lillyman and Ryan Hoffman. Albert Vete starts for Bull.

For the Roosters Blake Ferguson returns from a foot injury in place of Origin-bound centre Michael Jennings. Boyd Cordner's absence means Mitch Aubusson moves to the back row, Shaun Kenny-Dowall shifts to the centres and Brendan Elliot comes in on the wing. Mitchell Pearce is effectively replaced by Matt McIlwrick with Jackson Hastings starting at halfback while Aidan Guerra's absence means Sio Siua Taukeiaho starts and Willie Manu comes on to the bench.

Some late news suggests that Jared Waerea-Hargreaves may not play because of injury allowing Suaia Matagi to step up against his former club. Will add an interesting twist to the game and pit him against his young successors.

The last time we met at Mt Smart doesnt even bear remembering. Not so easy to do if you were one of the 20,000+ fans that showed up to the game on a beautiful sunny day .

Instead lets go back to fonder times like the 2008 semi final where a sold out stadium experienced one of the most electrifying Warriors matches ever played at our home.

Heres hoping we can repeat something along those lines today and come away injury free with a valuable 2 points in the kitty.

Just got home from work...sleep then get ready for the boys to pluck the roosters. Hope it's even colder tonight at the Mt. We can do it...Warriors by 10
Reactions: Sup42

was reading yesterday that Tomkins was still struggling with the knee injury.

I hope Tomkins can overcome his niggle and play today. We really need to get some use out of him before he heads home.

If Tui slots in, I'm not too worried. Makes the bench interesting - will Havili get a call up? Might be a safe bet to suggest that if we see Silva suit up for NSW cup, Tomkins will be in.

Up the Warriors, feeling a win tonight...

I'm going for the double reverse janfin - Roosters by 12
Reactions: Inruin and mt.wellington

What's the Janfin option about?

bringmethehorizon said:
What's the Janfin option about?
Click to expand...

For the last few years - and over a number of extinct warriors forums - week in, week out, janfin always picks the same result: Warriors by 6 (although she has been known to mix it up on the odd occasion and pick the Warriors opposition to lose by six)
Last edited: Jun 13, 2015
Reactions: hman, Warriors95, janfin and 4 others

wallacenz said:
was reading yesterday that Tomkins was still struggling with the knee injury.
Click to expand...

Yeah one report Ive seen suggests that Sam Tomkins is still in rehab and wont play. Tuimoala Lolohea to fullback and Siliva Havili to the bench. It'll all become clear once the Reserves play and Siliva is/isnt playing.
Reactions: Richie

Contributor
Its windy as hell here but nowhere near as hot. Or even warm. The winds got a bite to it. Weather forecast has the odd shower coming our way across the day. 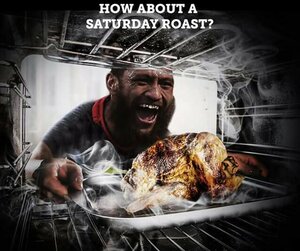 ​
Reactions: Johnnyray, The Stache, Defence and 5 others

I hope Manus ok after grabbing that hot tray with no oven gloves on!
The poor fella looks like he's in pain
Reactions: mt.wellington, Onewarrior and (deleted member)

mt.wellington said:
Its windy as hell here but nowhere near as hot. Or even warm. The winds got a bite to it. Weather forecast has the odd shower coming our way across the day.

Sounds like a tricky day to be fielding bombs. Hopefully we see some of Shaun Johnson's stratosphere piercing monsters, with Kata and the Beast storming down on Roger Tuivasa-Sheck (smash him boys, but do it.... gently).

KiwiWarrior said:
I hope Manus ok after grabbing that hot tray with no oven gloves on!
The poor fella looks like he's in pain
Click to expand...

Contributor
If Tomkins is fit and plays, and with JWH out I'm actually picking us to win. Tomkins doesn't play then I'm not so sure,

Tomkins should change his name to Tampon, in for 1 week out for 3
Reactions: Richie, hman, The Stache and 11 others

mt.wellington said:
Its windy as hell here but nowhere near as hot. Or even warm. The winds got a bite to it. Weather forecast has the odd shower coming our way across the day.

Manu will probably drop the chicken when he takes it out of the oven..
Reactions: Richie, runituptheguts, facefacts and 1 other person

I expect the Warriors to make zero use of Shaun Johnson's bombs and instead feed it to Le Chad on every fifth tackle play. Hopefully he can put up a little chip into the corner. Maybe even target Tupou.
Other than that, I want to see Manu drop it at least once with the try line open. Kata to drop it at least once over the line and a combination of our outside backs to drop it at least 4 times coming out of our own 20 while trying to give our 75 metre a game forwards the rest they deserve.
I also want to see Manu score a try only he can score, but only after he gets beaten on the outside twice.
I also want to see our defensive line move into a "holding" pattern about 10 minutes before the end of each half. Now this is a very important move where all we do is hold our shape while keeping our feet planted. No one is to move up and attempt a tackle. I then want the Roosters to run around us to score in the corner. Perfect.
I also want to see hurrel hurt his knee in a strong hit up, get taken off, then come back on about 15mins later. Who needs that spare interchange anyway ?

I also can't wait to see Tomkins not play again and maybe Shaun to get involved in the last 10 mins.
Go get em boys!!!
Reactions: Richie and facefacts

OH damn, just realised the game is at 8pm!

Obviously every week I don't want them to do this they do. So this week I'm expecting it from them.

I think you've just not only described Manu, but the rest of our wings plus a couple of centres
Show hidden low quality content