A thread for all general discussion about the Melbourne Storm that doesn't fit into existing threads such as the NRL Salary Cap, Naughty Chair, Warriors team lists, game day and post match threads etc.

This can include past or present news and views, match tactics, recruitment strategy etc.

Ah my 2nd favourite team, always have that strong Kiwi influence and are always the benchmark..
Reactions: bruce

brightman said:
Ah my 2nd favourite team, always have that strong Kiwi influence and are always the benchmark..
Click to expand...

well for now they are. Be interesting to see what happens in the next year or 2. Will they recreate the big three with new players or will they turn into just another club? Will Bellamy stick with them, long enough for Cam to take over? Or will he and Billy bugger back off to QLD?
Reactions: bruce, Defence and fizurg

They get a lot of criticism for their wrestling tactics but you have to admire the success they have had. Both recently and even their early years.

What I admire from the side of the last 10 years is the little things. As a youngster you get drilled to dive on loose balls, get yourself in support of the ball carrier even when it doesn't look like it is on, same thing defensively get ready in case you are needed, get into formation.

It seems like the Storm are better at the little things.
Reactions: bruce and Tedster

gREVUS said:
well for now they are. Be interesting to see what happens in the next year or 2. Will they recreate the big three with new players or will they turn into just another club? Will Bellamy stick with them, long enough for Cam to take over? Or will he and Billy bugger back off to QLD?
Click to expand...

Yes will be interesting to see if they pay somebody like Munster the same money as the big 3 have been on and whether he will eventually provide as much leadership and value as they have.
Reactions: bruce and gREVUS 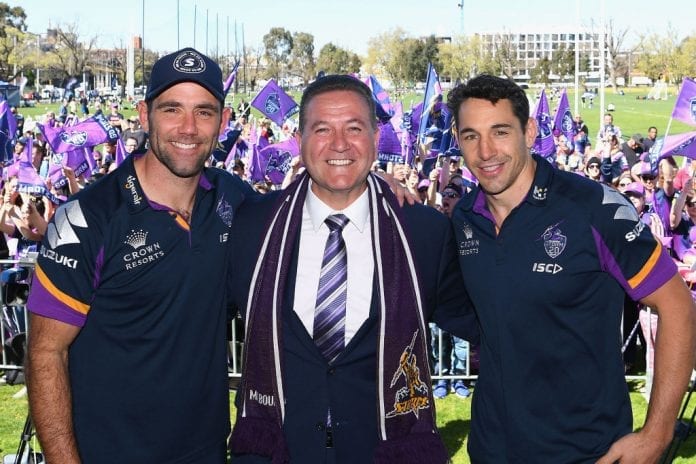 MELBOURNE, AUSTRALIA - OCTOBER 01: Cameron Smith and Billy Slater of the Storm pose for a photo with Minister for Sport John Eren during the Melbourne Storm Fan Day at Gosch's Paddock on October 1, 2018 in Melbourne, Australia. (Photo by Quinn Rooney/Getty Images)

Melbourne Storm legends Cameron Smith and Billy Slater will be immortalised as statues outside the Storm’s home ground AAMI Park.

Victorian minister for sport John Eren made the announcement at as the Storm players returned home from Sydney after their 21-6 loss to the Roosters in Sunday’s Grand Final.

“Just to make sure they are immortal forever and a day, the state government along with the NRL and Melbourne Storm will invest in statues for Billy Slater and Cameron Smith (at AAMI Park),” Eren said.

Slater officially retired after 319 games for the Storm, winning two premierships while Smith has not yet committed for season 2019, despite confirming his intent to play on next season.

Contributor
Been a bit of talk about Storm changing their Logo this coming season- anyone seen anything?

matiunz said:
Been a bit of talk about Storm changing their Logo this coming season- anyone seen anything?
Click to expand...

The only logo changes I've heard about was one of the Warriors/Cowboys celebrating their 25th season despite them both joining in the same year.

The Storm celebrated their first year or 20 seasons this year didn't they with a jersey similar to their inaugural one. I would guess it could be something around that.

snake77 said:
The only logo changes I've heard about was one of the Warriors/Cowboys celebrating their 25th season despite them both joining in the same year.

The Storm celebrated their first year or 20 seasons this year didn't they with a jersey similar to their inaugural one. I would guess it could be something around that.
Click to expand...

Also heard the Tigers might have a 20th season logo (shit that makes me feel old)
Reactions: bruce

Become an owner of Melbourne Storm

Ever wanted to own your own sports team? Or better yet become an owner of YOUR Melbourne Storm?


The concept will give the public the opportunity to invest in the football club and in turn become not just fans but shareholders in the Melbourne Storm.

The model of fan ownership has been an enormous success for international sporting giants around the world, with teams such as the Green Bay Packers (NFL - USA) benefitting from this concept that takes fan engagement and support to a whole new level.

Mr. Campbell said that the Club and its current owners are excited at exploring the fan ownership model - that correlates with Melbourne Storm's desire to be an innovative and proactive leader in the Australian sporting landscape.

"When the owners took control of the Melbourne Storm five years ago, we committed to explore the viability of the fan ownership model once we had established a sustainable financial platform for further growth. We have been able to achieve that objective with the support of our fans and commercial partners and now is the time for us to look at the future of our football club.

"We see fan ownership as an innovative way to set the platform to turbo-charge the ambitious growth plans we have for the Storm, including doubling our membership to 50,000 by 2023.

"We know this is a complex issue and it will take some time to fully understand the interest and detail of a fan ownership model. We will keep fans up to date on any decisions that are being considered."

The Club has commenced the process of exploring whether the fan ownership model is a viable concept for all stakeholders by engaging with leading international advisory firm, Greenhill.

I can see why they'd do this, obviously generates cash and is a huge opportunity for fans to show their loyalty and support.

As long as it doesn't muddy the waters in terms of decision making at the club and politics around the board etc then it has to be a positive move.

The only club I think you can currently buy shares in is the Broncos I believe? They're listed on the Australian Stock Exchange.

I wonder if we will see more of this at other clubs in the future.
Reactions: bruce

Cool, NZ owners putting their mark on the club..


UPDATE: The Storm have ridiculed suggestions they will forfeit their season-opening clash with Brisbane due to salary cap constraints.
asked by Sporting News for a response to the story, a Storm official quipped: "Let's hope the Broncos read the story and don't turn up""We are working through a few things but it's ludicrous to suggest we won't be able to field a team."

The Melbourne Storm have been suspected of being over the NRL salary cap just sixteen days from round one.

NRL Insider Dobbo told Triple M's The Big Breakfast on Tuesday morning that Melbourne have been told to cut players before their round one clash against the Broncos on Thursday, March 14.

Regardless of existing broadcast deals, Storm fans and stakeholders, Dobbo revealed that the NRL will bar Melbourne from taking the field should they fail to comply with salary cap regulations.

"But here's the thing, the NRL have said to the Melbourne Storm, it's like this: 'you get under the salary cap within sixteen days or you won't be taking the field in round one.'

"So, somebody has to go for the Melbourne Storm."

Under salary cap regulations, if a club can't get under the salary cap then the last player signed is the first to leave.

Unfortunately for the Storm, their latest signing is Cameron Smith.

Set to play a historic 18th NRL season for the club, the 35-year-old re-signed with Melbourne Storm for further two years in January.

According to Dobbo, Storm prop Sam Kasiano could be forced out at the club to accommodate the captain's return.

"Well, he's (Sam Kasiano) been shopped around everywhere for some time," Dobbo said.

"Now if they can't get rid of Sam Kasiano - there was a bit of talk - if the findings come down with the NRL, St George put Jack de Belin to the sideline, they might be able to pick up Kasiano.

"But, Kasiano is no Jack de Belin, nowhere near it."

The former New Zealand prop joined the Storm in 2018 after seven seasons for the Canterbury-Bankstown Bulldogs, managing just 14 games off the bench.

After playing the first 10 games of the campaign, injuries and suspensions limited him to four appearances for the rest of the season.

The 153-game veteran has two years to run on his Storm contract but salary cap issues could see him depart after just one year with the club.
https://www.sportingnews.com/au/lea...ulation-sam-kasiano/1hbxdc20zcv0wzasjj3uqu5vl

I’ve said it before, but one of these days a club will only become champions after a successful audit of their accounts
Reactions: moonknightgk and wizards rage

Good point. Winning a competition brings significant financial opportunities, that is why they it.

It is simple and consistent. If you have stuffed up your cap automatic 4 point forfeit. Note I didnt say deliberate. If I remember rightly there has been precedent for 4 points. Amount doesnt matter, 4 points automatic.

I giggled when the article put the words Dobbo, NRL and insider in the same sentence as if it made sense.
Reactions: Johnnyray, Hazman and brightman

Hardyman's Yugo said:
I’ve said it before, but one of these days a club will only become champions after a successful audit of their accounts
Click to expand...

To late, the Roosters are already "Champions of the World"..
Reactions: Off The Bench

There was a list a few weeks ago with a few more players that they could potentially move on. One of them was Kaufusi being shopped around to Super League clubs.

It doesn't sound like they are to serious about freeing up the cap space at the moment. If at the moment if Kasiano is the main person being shopped around as it's only one player. Sure his contract might meet the value required.