The Warriors are targeting Kodi Nikorima to solve their playmaking crisis in a move that could end the Brisbane halfback’s career at the Broncos within weeks.

The Courier-Mail understands the Warriors will table a formal offer in the next 48 hours in a bombshell development for Nikorima as he prepares for Thursday night’s Broncos-Souths grudge match.

The clash at Sydney’s ANZ Stadium against his former coach Wayne Bennett could be Nikorima’s 87th and final game for the Broncos with Brisbane considering an immediate release to the Warriors. Kodi Nikorima could be on the way out of Red Hill. Picture: Annette Dew

The 25-year-old was first linked with a move to the Warriors last December.

Nikorima has been made aware of the Warriors’ poaching bid and would be devastated at the thought of leaving a Broncos club that has groomed him for the NRL since his teen years in Brisbane’s under-20s ranks.

The veteran of 13 Tests for New Zealand has consistently maintained he can succeed at halfback but the Broncos’ sluggish 2-5 start this season has not helped his prospects of being Brisbane’s long-term No.7. 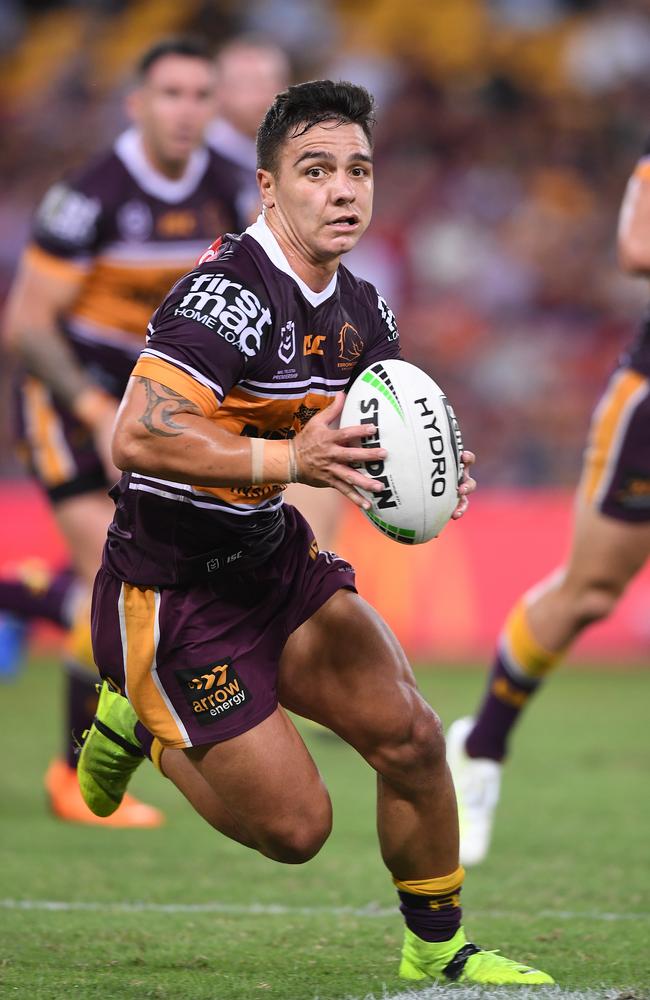 Nikorima has had a tough start to 2019. (AAP Image/Dave Hunt)

Broncos coach Anthony Seibold is developing young halfbacks Sean O’Sullivan, Tom Dearden, Cory Paix and Tanah Boyd, raising the possibility Brisbane could send Nikorima back to the bench as a No.14 super-sub next season.

But Nikorima may not last that long at Red Hill if the injury-ravaged Warriors can get their man as soon as possible.

The Kiwi outfit have had their scrumbase decimated with Shaun Johnson’s off-season move to Cronulla compounded by a groin injury to his one-time halves partner Blake Green.

Such is their plight, the Warriors were forced to use back-rower Tohu Harris in the halves alongside four-game rookie Chanel Harris-Tavita in their Anzac Day clash against Melbourne last Thursday night.

Nikorima is contracted to the Broncos until the end of 2020 but the Warriors are keen to tempt him with a lucrative offer, potentially spanning three seasons beyond this year.

Warriors coach Steve Kearney worked with Nikorima as a former assistant at the Broncos and the pair share the same manager, the NRL’s most powerful agent Isaac Moses.

The Broncos were hoping the Milford-Nikorima alliance would work but the pint-sized pair have never really clicked since joining forces last season following Ben Hunt’s departure to the Dragons.

In the wake of Brisbane’s 29-6 defeat of Cronulla on Saturday night, Broncos prop Matt Lodge praised Nikorima, saying he is an NRL-quality halfback.

“I’d hate to be tackling him because he’s short and explosive.

“He can just break games open when we need points. Kodi is a threat. He’s just got to run the ball.”

www.couriermail.com.au
Last edited by a moderator: May 7, 2019
Reactions: mt.wellington, Hazman, YeahNah 4020 and 2 others

snake77 said:
Probably truth to the rumours about not being Seibold's ideal half back.
Click to expand...

Got to be better than what we’ve got at the moment (Nikorima).
Reactions: Sup42, Hazman, SPJ and 5 others

If we are getting him mid season we are paying overs to get him here or the Broncos have been shopping him around and we might be getting a bargain. I think it might be the latter.
Reactions: Sup42, Hazman, Tonbridge (Swanley) and 2 others

That's thing with most player signings there are two sides to every signing. Look at how we pumped up signing Blair as taking the heart out of the Broncos forward (remember that as it was posted a few days ago). The Broncos probably felt they were freeing up space to re-sign some of their young forwards and get an aging player off their books.

At least Nikorima is closer to his prime.
Reactions: Gen. Melchett, Worried2Death, Hazman and 4 others

snake77 said:
That's thing with most player signings there are two sides to every signing. Look at how we pumped up signing Blair as taking the heart out of the Broncos forward (remember that as it was posted a few days ago). The Broncos probably felt they were freeing up space to re-sign some of their young forwards and get an aging player off their books.

At least Nikorima is closer to his prime.
Click to expand...

Honestly, we could sign Ronald McDonald for all I care at this point.

I just want to see our attack back.
Reactions: Akkerz, Sup42, FuNQie and 6 others

I just hope we don't screw up the development of Chanel Harris-Tavita. Signing ClKN could take some pressure off the kid and let him develop in isp till the next Green injury
Reactions: WellingtonOrca, YeahNah 4020, Worried2Death and 1 other person

That article states it is far from a done deal as he needs to agree, and secondly that we are offering a lucrative deal. Which if he makes 350 - could be around 500-600?

In terms of someone's question can we also afford Herman? Herman last year was on $200K at the broncos but I don't know what the Knights got him at.

Theoretically yes we could afford both but it would be a tight squeeze if we are paying overs for both. Also bear in mind we spent part of the Shaun Johnson funds on keeping Luke.
Reactions: bruce

Hes not coming to play in the starting line up, Kearney plans to make our bench even smaller!

This is being reported Peter Badel who is a reputable journalist.

Broncos are touted to have two good junior halves coming through - one in particular who they think is FG ready now.
Reactions: Gen. Melchett, Hazman, tajhay and 1 other person

If I was going to sign any half back from the Broncs it would be Tanah Boyd he hasn't played any first grade yet but has a lot of Alfie Langer about him.He carved up against the jr kiwis last year big time. Still Kodi will be a massive plus for us & happy if we do get him.
Reactions: Tragic, Hazman, YeahNah 4020 and 1 other person

Was reported Kearney turned down a Brisbane offer of Nikorima in December. If we take him now I’m picking it won’t be on overs and will work for both teams
Reactions: Sup42, Hazman, fizurg and 3 others

I like Kodi and was actually hoping we'd get him back in December. The "lucrative offer" bit worries me though, but I guess we will see what it is.

Personally, I doubt AK and Lawton will stick around (which is a pity), Green has one more year at best, Luke is in his last year I think, Roache who knows how much football he will play, and Jazz wants to be a lock so... Nikorima at the right price could be useful at 6, 9 or 14 for the next few years..

Point is, there's been a problem brewing with our half/hooker stocks and I'm glad we've stopped pretending there isn't one.
Last edited: Apr 28, 2019
Reactions: Mr Frank White, Sup42, snake77 and 10 others

POS is just having a play and Niko so his son can play first grade for the broncos
Reactions: WellingtonOrca, Hazman, jsmooove and 5 others

wizards rage said:
Was reported Kearney turned down a Brisbane offer of Nikorima in December. If we take him now I’m picking it won’t be on overs and will work for both teams
Click to expand...

Depends which side blinked first. Broncos whose halves have been criticised for their game management or warriors whose fans have been asking what is happening with recruitment/resetting squad balance/salary cap unused/halves injury crisis.
Reactions: Hazman, fizurg and bruce

Wellington Warrior said:
Can he kick goals? If he replaces Chanel Harris-Tavita and Luke sits on the bench for large parts of the game, who is our kicker?
Click to expand...

At one point they tried to make Patrick Herbert a goal kicker in the canterbury cup - but he went 3 from his first 8 attempts so they found someone else.

Yes Luke is an option but only if he plays all 80 like you said.

I don't know as they certainly can't justify pairing CN with Chanel Harris-Tavita instead of Green.

fizurg said:
If we are getting him mid season we are paying overs to get him here or the Broncos have been shopping him around and we might be getting a bargain. I think it might be the latter.
Click to expand...

Whatever the criticism of Nikorima he is an international, has genuine speed off the mark and has to be watched by a defence. All that will help our outside backs. What worries me is goalkicking so maybe Keighran will become more valuable if Green is as bad as it seems. This poster said as much when his groin was first mentioned.
Reactions: Sup42, Gen. Melchett, Hazman and 3 others
Show hidden low quality content
Share:
Share