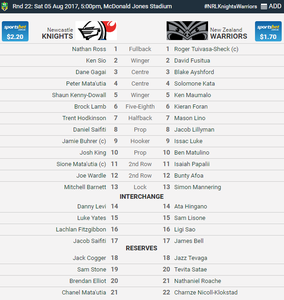 Almost five months on from their first meeting in 2017, few would have predicted that the Newcastle Knights would arrive at this encounter against the New Zealand Warriors with the better recent form behind them.

With the Warriors zero from four in the past month, most recently going down to the Cronulla Sharks 26-12 last Friday night, Newcastle on the other hand come off an upset 21-14 victory over the eighth-placed St George Illawarra Dragons.

Unsurprisingly Newcastle coach Nathan Brown has opted to go with the same 17 who helped his side to their third victory of 2017.

The Warriors have just the one forced changed ahead of travelling to McDonald Jones Stadium, with rookie Isaiah Papali'i coming in for Bodene Thompson (pectoral) in the second row.

Why the Knights can win: At home again after scoring a gutsy victory over a current top-eight side last up, Newcastle have plenty of reason to feel confident this week, especially given they face a Warriors side who are going backwards in a hurry. With the Saifiti brothers chugging away, last week running for a combined 351 metres, and Nathan Ross and Brock Lamb firing in the spine, the Knights are hard to stop if they get a roll on. The Warriors are ripe for the taking, and Newcastle look hungry.

Why the Warriors can win: It is no secret that the Knights have some glaring deficiencies in their game this year. Even last week in victory some of them showed up, with Newcastle missing a colossal 64 tackles. Across the year they average over 10 errors per game, while the Warriors complete better than any team bar the North Queensland Cowboys this year, at an average rate of just under 80 per cent. If the Kiwi side play to their strengths they will have too much quality for the Knights to handle.

The History: Played 37; Knights 17; Warriors 19; Drawn 1. The Warriors have taken the points the last four times they have met the Knights, stretching across three seasons, but most recently it was a close one, with the Kiwi side requiring a late try to win 26-22 in Round 1. Newcastle have won nine of 16 meetings against the Warriors at this week's venue.

What are the odds: Newcastle's price is certain to firm as we get closer to the match, judging by the amount of money Sportsbet has seen placed on the home side. The cash is running 10 to 1 in favour of the Knights and there's good money for them to win 1-12 as well.

NRL.com predicts: In theory the Warriors still have it all to play for on Saturday night, while the Knights are doing it solely for pride, and on paper it's hard to tip Newcastle. But they have confidence right now and their opponents this week look a badly broken machine, lacking direction in attack and struggling in defence. Knights by two.

Is anyone excited, or even looking forward to this? Or is it just the Facebook freaks that actually look forward to the games now?

Here come the easy beats. I expect the team to get up for this one. Time to make some additions to the highlights reels.

I can here it now. "Gee that Sam Libone is a good player with a big future."

And "Solo Kata jumps into dummy half and scores a brilliant solo try."
Reactions: Off The Bench and bruce

I just can't stop thinking, what an awesome bench we have . Envy of the whole of the NRL.At least put Satae chicken on there.
Reactions: bruce

Contributor
The only thing that keeps me interested are the stats. If they win tonight they stay in 11th, if they lose they might even go down to 13th. 11th would be quite creditable for that roster. I think more likely that SK and Stacey Jones will just get more grey hair.

Wtf is that bench, Hingano dropped off the bench for Jazz Tevaga. Just when you think Kearney could not possibly be more stupid he goes and outdoes himself

The Knights must be shaking in their boots.

Would be the way I'd go, Kearney you are a dunce and if we lose Ill still be happy cause itll just be one more nail in his coffin
Reactions: Hadyn

Really? Is that our bench? What's the plan, bite their ankles and hope they fall over?

Even Gargamel would throw those Smurfs back for being undersized.
Reactions: Spence, The Cheap Seats, bruce and 2 others

jonno said:
Here come the easy beats. I expect the team to get up for this one. Time to make some additions to the highlights reels.

I can here it now. "Gee that Sam Libone is a good player with a big future."

And "Solo Kata jumps into dummy half and scores a brilliant solo try."
Click to expand...

How can we as Warriors fans have the right to disrespect anyone by calling them easybeats
Reactions: ACT Warrior, mt.wellington, The Cheap Seats and 6 others

¿N. ig-mah¿ said:
Is anyone excited, or even looking forward to this? Or is it just the Facebook freaks that actually look forward to the games now?
Click to expand...

I'll watch it... but I'm expecting us to lose
Reactions: ACT Warrior, Off The Bench and bruce

Contributor
Why is "Don't Care Anymore" not an option in the poll at the top of the thread?
Or "Thank God The Season Is Nearly Over?"
Reactions: ACT Warrior, bruce, Hadyn and 2 others

Give yourself a quick couple of swift uppercuts Kearney, that bench is pathetic.

Mata'utia's will rip us over the park (either of them), look at their back line! Ayshford will be shitting himself, mind you could he be more invisible? I laughed when I saw the headline 'Foran and commitment' all in the same sentence, there is the problem players coming out and spouting Shit and lies.
Reactions: Mr Brownstone

Contributor
Look at that bench? Wow!!

hardest preseason ever starts today
Last edited: Aug 5, 2017
Reactions: The Cheap Seats, Off The Bench, Johnnyray and 2 others

Will this count as one of SBW's suspension games?
Reactions: The Cheap Seats, bruce, Johnnyray and 2 others

The most telling thing about the Warriors right now, a game day thread that's been open since 7am and barely a post. Not exactly exciting the fanbase are they.
Reactions: The Cheap Seats, bruce and Johnnyray

Gizzyfan said:
How can we as Warriors fans have the right to disrespect anyone by calling them easybeats
Click to expand...

You seem to be forgetting our HUGE pack and awesome bench.
Reactions: bruce, Johnnyray and Bluecat again

Contributor
Watching this game in the hope the Saifitis tear us up through the middle. Now there is a couple of young bucks tryna hustle for every meter week after week. Try and learn something while youre getting schooled Lisone.
Reactions: Viking and bruce

Gizzyfan said:
How can we as Warriors fans have the right to disrespect anyone by calling them easybeats
Click to expand...

Well you can't say they're tough to beat this season now can you. Giving away 27 points a game on average. They be worst than us.

If we get our nose in front they'll be easy pickings... Then our acrobats get to make some sweet highlight maneuvers off them without having to worry about a fightback..

Stalefish540 said:
Watching this game in the hope the Saifitis tear us up through the middle. Now there is a couple of young bucks tryna hustle for every meter week after week. Try and learn something while youre getting schooled Lisone.
Click to expand...

I think Lisone has done enough learning from the current wooden spoon contenders thank your very much.
Reactions: Off The Bench