Shame Toulouse missed out in the playoffs - would've been good to see them play the Catalans.

Announcement of an ESL game to be played in Oz in February 2018
https://www.theguardian.com/sport/2017/jul/26/super-league-wigan-hull-australia-rugby-league
Reactions: mt.wellington

Hardyman's Yugo said:
Announcement of an ESL game to be played in Oz in February 2018
https://www.theguardian.com/sport/2017/jul/26/super-league-wigan-hull-australia-rugby-league
Click to expand... 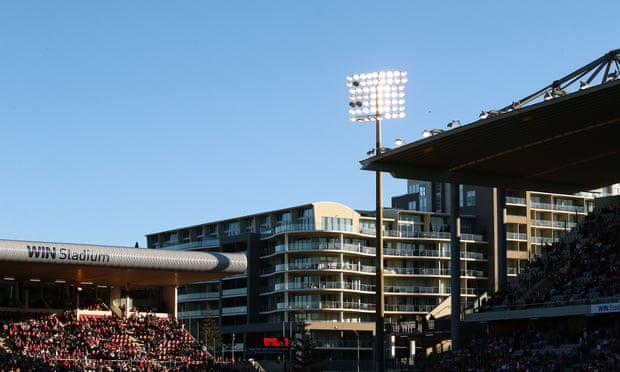 Wigan will face Hull at the WIN Stadium in Wollongong in a regular Super League fixture in February 2018. Photograph: Mark Nolan/Getty Images


Super League will host a match outside Europe for the first time in February 2018 when Wigan and Hull will play a fixture in Australia.

The Warriors, who are understood to have forfeited a home game to facilitate the move, will face Hull at the WIN Stadium in Wollongong on Saturday 10 February before travelling to Sydney to complete a three-match tour.

After their league game, the two sides will compete in the first Super League-NRL double-header at ANZ Stadium, when Wigan will face the 2014 NRL champions, South Sydney, before Hull play St George Illawarra Dragons later that day. Wigan expect around 5,000 fans to make the 12,000-mile journey.

Wigan officials recently flew to Australia to finalise a proposal backed by the Super League and the NRL, and the club’s owner, Ian Lenagan, said: “This announcement is one of the most innovative and exciting in the history of Wigan. [We] have been in negotiations with key stakeholders both in Australia and the UK over the last 12 months, delicately pulling together this complex agreement.

“The opportunities to create new and increased core business from sponsorships and partnerships together with Wigan brand development, the increased profile with NRL players and opportunity for our fans makes this the biggest single commercial contract in the history of the club.

“The Wigan fans are famed for their loyal support as shown when a huge army of supporters travelled to Sydney for the World Club Challenge game with Sydney Roosters in 2014. We firmly believe that the Wigan and Hull fans will be as excited about this venture as we are and we have announced early to allow fans the chance to plan their trip to Australia and, at the same time, to provide clarity on the number of home games for the 2018 season before season ticket packages are launched later this year.”

The move is not expected to end the World Club Series concept, with discussions continuing about at least a one-game event next year featuring the NRL and Super League champions. Should Wigan, Hull or, in the event of the series remaining, both qualify, assurances have been made they will return to the UK in time to play their fixtures.

The Super League executive director, Roger Draper, said: “Featuring two of the biggest rugby league teams in the British game, Wigan Warriors have worked extremely hard in partnership with the New South Wales government to create history for our game by hosting what will be the first-ever game outside of Europe while engaging an international fanbase, showcasing the vital role sport plays in the global economy and growing the Super League brand.”

The Hull chairman, Adam Pearson, added: “This is a landmark occasion for the sport of rugby league and an opportunity for Hull FC to play our part in making Super League history. There will be a great deal of excitement from fans of both clubs and we’re sure many will want to travel to New South Wales for such a historic occasion, support their team and help showcase all that is good about rugby league in the UK.”
Reactions: mt.wellington

Be interesting to see how Hull KR and London go here - don't think Halifax or Featherstone will trouble anyone.

You've got to think that the Catalans and Warrington will finish in the top four.

I was away at the weekend so haven't seen much RL, but Manu got 2 tries for Salford on Friday evening

In other news Rangi Chase's career appears to be over:
https://www.totalrl.com/rangi-chase-suspended-positive-test-cocaine/
Worra tit!
Last edited: Aug 7, 2017

Read that Manu scored a couple but didn't see the game - Salford lost so did Manu leak any?

Lord Gnome of Howick MBE said:
Read that Manu scored a couple but didn't see the game - Salford lost so did Manu leak any?
Click to expand...

TBH, not yet seen it. Highlights are on BBC iplayer though so will probably watch it later. Salford v Cas is live on Sky tonight, kicks off in 3 hours time
Reactions: Miket12

Hardyman's Yugo said:
TBH, not yet seen it. Highlights are on BBC iplayer though so will probably watch it later. Salford v Cas is live on Sky tonight, kicks off in 3 hours time
Click to expand...

The sad fact is Salford simply aren't a good enough team to use him properly. He isn't getting the ball in a bit of space in a dangerous position. His runs are usually hit ups from well inside their own half taking work off the forwards. The try count is a bit misleading, anyone on here could have scored two them., simple catch and touch down with no defenders anywhere near. Salford need better inside backs.

Cas are a very good side and a few of them will be in the World Cup squad.

A minutes silence before the game in honour of former Salford and GB captain Chris Hesketh who passed away on Thursday:
https://www.salfordreddevils.net/chris-hesketh-1944-2017/
Last edited: Aug 12, 2017
Reactions: mt.wellington

Lord Gnome of Howick MBE said:
Be interesting to see how Hull KR and London go here - don't think Halifax or Featherstone will trouble anyone.

You've got to think that the Catalans and Warrington will finish in the top four.
Click to expand...

Hull KR have just won 16-20 at Leigh in the televised game.
Reactions: Lord Gnome of Howick MBE and Miket12

Keiron Cunningham brought in by Leigh as an extra coach
https://www.rugby-league.com/superleague/article/50747/cunningham-takes-on-leigh-challenge

Saw that, what about Saints?

Lord Gnome of Howick MBE said:
Saw that, what about Saints?
Click to expand...

He got sacked a few weeks ago, possibly the first man to be sacked who has a statue outside the ground
Reactions: bruce and Lord Gnome of Howick MBE
Show hidden low quality content
Share:
Share