The Red Devils beat Hull KR in the Million Pound Game to stay up.

In the Championship, Toulouse's return to the second tier kicks off on Saturday, 4 February with the visit of Batley Bulldogs.

Hull KR take on Bradford Bulls in their opener on the Sunday.

Meanwhile Toronto Wolfpack begin their life in the English game following their addition to League One, with a trip to London Skolars on Saturday, 4 March.

York however are still in negotiations with the Rugby Football League regarding their membership of the league.

Other highlights
Significant dates for 2017 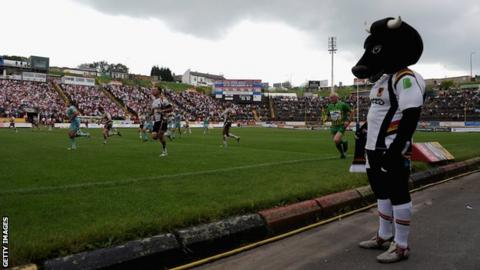 The four-time Super League champions were placed in administration for the third time on Monday.

The club's membership of the Rugby Football League has also been terminated and the club could face a points deduction or relegation.


Joint administrator Gary Pettit said: "We are excited by the interest shown."

He added: "We consider that several of the parties appear to have sufficient resources and experience to take Bradford Bulls forward.

"A lot of hard work is going on behind the scenes to safeguard the Bulls' heritage and legacy."

The Bulls entered administration in both 2012 and 2014 and finished fifth in the Championship last season.

They are scheduled to start the 2017 season at Hull KR on Sunday, 5 February.

Super League strips for the 2017 season.

Bradford: RFL to consider four bids to set up new team in the city
https://www.bbc.com/sport/rugby-league/38562001

Bradford: RFL to consider four bids to set up new team in the city

Bradford has had a rugby league presence since the beginning of the Northern Union in 1895
The Rugby Football League will consider four bids to create a new professional club in Bradford after the liquidation of the Bulls earlier this month.

After no buyer was found for the old club, the RFL requested submissions of interest before Monday's deadline.

Prospective buyers must provide proof of funds and relevant experience.

The confidential bids will be assessed by the governing body's executive and recommendations "as soon as possible", though there is no public timescale.

There has been a rugby league presence in the city of Bradford since before the birth of Northern Union in 1895. Two local clubs, Bradford FC and Manningham, were among the founding members.

Northern continued the legacy after being founded in 1907 and enjoyed success in spite of a reformation of their own in 1964, winning the Challenge Cups and establishing the careers of stars such as Welsh ex-union convert Trevor Foster, Ellery Hanley and Brian Noble.

Meanwhile, the Bulls were groundbreakers in terms of marketing and on-field success in the Super League era before their recent downturn in fortunes.

"Bradford is a great city with a rich rugby league heritage and deserves a professional club that supporters can be proud of," the RFL added.
Last edited: Jan 11, 2017

The governing body has reached agreement with a consortium that will see a new club formed to take the place of the old defunct Bradford for the start of the Kingstone Press Championship season on February 5.

However, the identity of the new owners will not be known until a press conference is held early next week.

That means another weekend of uncertainty for coaches and those players remaining from the old club who have been largely kept in the dark over events since meeting one of the bidders a little more than a week ago.
A statement read: "The RFL is pleased to announce that an agreement has been reached with a consortium to create a new professional rugby league club in Bradford.

"Following a thorough review and consultation with potential owners throughout the week, the RFL board approved a decision to offer membership of the League to a consortium that it believes offers an exciting and stable future for rugby league in Bradford.

"As previously communicated, the new club will begin the 2017 season in the Kingstone Press Championship on minus 12 points.

"The owners will arrive at Odsal early next week and will at that point speak with former players, staff and relevant stakeholders before holding a press conference to reveal their identity and outline their vision for the future."

BBC Sport reported that former New Zealand Rugby League chairman Andrew Chalmers is believed to be at the head of the operation, with former Kiwis coach Graham Lowe also believed to be involved.

The old Bradford Bulls were liquidated 10 days ago after administrators failed to find a buyer - but the RFL fielded four serious bids after seeking offers to resurrect the club and has now come up with a preferred option.

Not long now till league is back

Its going to be very interesting to see how the Toronto side performs in the third division.

Also, watch Toulouse who are going for back-to-back promotions (and could be playing a local derby against the Catalans in Super League in 2018!)
Last edited: Jan 18, 2017

Mr Lowe has taken over the Bulls.... Get the tissues ready!
Reactions: bruce

Swanley said:
Mr Lowe has taken over the Bulls.... Get the tissues ready!
Click to expand...

It's not that exciting?
Reactions: Tonbridge (Swanley)

Lord Gnome of Howick MBE said:
It's not that exciting?
Click to expand...

Toovey is the new coach...cannot see that lasting....he'll not like the standard on offer.

Swanley said:
Toovey is the new coach...cannot see that lasting....he'll not like the standard on offer.
Click to expand...

Toovey is an intelligent guy, albeit an angry one, but he will have thought this through. Rhys Jacks, centre, Toronto’s Canadian scrum half, offloads at the KCOM StadiumALEX WHITEHEAD/REX FEATURES
Professional rugby league, teetering on the brink in too many of its northern enclaves this winter, is suddenly big in Canada with the advent of Toronto Wolfpack, the first transatlantic sports club, whose inaugural match came 3,500 miles from home yesterday.

The Toronto Star warned its readers that the encounter with Hull was David against Goliath. The Challenge Cup holders only just prevailed 26-20 in an intriguing pre-season game at the KCOM Stadium. A heartening start, but the serious business for the Canadian upstarts begins at the bottom professional rung in Kingstone Press League 1 against London Skolars on March 4.

Toronto are eyeing the heights of the Betfred Super League as early as 2019. But the sport’s traditional M62/M60 corridor may stretch even further…

Toulouse beat the Catalans in a warm up;

The Wolfpack were first to score through Wallace but Hull came back strong with tries from Kelly, Shaul and Fonua. Former Kiwi international Moimoi pulled one back for Toronto but Fonua grabbed his second try of the game to give FC some breathing space at the half.

Toronto drew level after the break with tries from Pownell and Kay. Rawsthorne then broke for Hull FC to score the game winning try with 20 minutes remaining.

Leeds Rhinos 30-4 Hull KR
Ryan Hall’s testimonial was a joyous occasion for the Rhinos as they ran out 30-4 winners against Hull KR.

Leeds took the lead early on as Jamie Jones-Buchanan went in underneath the posts, but KR hit back when Quinlan set up Ryan Shaw to score in the corner. Joel Moon sent Rob Burrow over just before half-time and Leeds went in with a 12-4 lead.

The Rhinos kicked into gear in the second half and tries from McGuire, Garbutt and Keinhorst gave them a clear lead. Ryan Hall converted the final try with a perfect kick from the touchline to bring up 30 points in a strong performance.

Ben Crooks went the length of the field to give Leigh an early lead, but Wigan replied with two tries through returning New Zealand International Tommy Leuluai and Oliver Gildart. Cory Paterson hit back for Leigh before the half giving the Leythers a 12-10 lead after the first 40.

Leigh scored seven unanswered tries in the second half as Cory Paterson completed his hat-trick.

London Skolars 26-22 Wigan Warriors
A Warriors Select XIII travelled to face the Skolars on Friday night in a busy weekend for Wigan.

London flew to a 26-6 lead and the second-half comeback wasn’t enough for Wigan who came up just short.

Huddersfield Giants 28-10 Bradford Bulls
Huddersfield marked Luke Robinson’s testimonial with a win over Bradford Bulls. Ikahihifo’s two tries were the difference at the half and the Giants went in 12-0 ahead.

Jared Simpson extended the lead to 16 before Keyes scored Bradford’s first try. A Roberts double for the Giants and Oakes for the Bulls meant the score finished 28-10 in favour of Huddersfield.

Morgan scored the only try of the first half to give Saints a 6-0 lead. St Helens scored their second just one minute into the second half through Spending and Fages capped off a top performance with 10 minutes left.

Toulouse led 6-0 at half-time and continued to apply pressure, which led to three further tries in the last 40. Catalans new boy Sam Moa scored their only try of the game.

Featherstone Rovers 28-20 Wakefield Trinity
Trinity’s unbeaten run in pre-season was ended as Featherstone put on a tough fight to earn the victory.

Wakefield took the lead through Miller but Featherstone struck back with two tries to make it 12-6. Mazive replied for Trinity to bring them to within two points at the break.

Ulugia scored two early tries in the second half to give Featherstone a 14 point advantage before Finn gave Trinity some hope with a score from dummy half.

Turner went over in the corner for Rovers and again took Featherstone just out of reach. Arundel’s try was too late for Wakefield who slumped to their first loss of 2017.

Halifax started strongly as Johnston scored to give the home side a 6-0 lead. Kopczak responded for Salford to draw the scores level and the teams went in at the half all square.

Kris Brining then scored his first try for the club to earn Salford 6-ppoint advantage and Lui scored a drop goal to ensure the Red Devils took the win in a hard fought victory.

The first game was a closer affair, with the London side beating Oxford RLFC 24-14.

The Broncos convincingly beat the touring Newcastle Yowies 46-12 in the second fixture, with both Hellewell and Dixon scoring hat-tricks.

Workington scored the first try of the game through Phillips but Widnes Under-19s kicked into gear and crossed four times to race into a 22-6 lead.

Batley Bulldogs 38-12 Keighley Cougars
Batley applied pressure from the get go and went 22-0 ahead before Keighley struck back to make it 22-6 at half time.

The Bulldogs continued where they left off in the second half, adding three further tries before Keighley grabbed their second of the game with five minutes remaining.

Barrow Raiders 36-10 Whitehaven RLFC
In a rehearsal for the Kingstone Press League 1 season, Barrow looked impressive from the start and raced to a 30-0 lead at half-time.

It was a quieter second half with Barrow scoring one further try before Whitehaven replied with two consolation tries of their own.

Doncaster RLFC 22-18 Sheffield Eagles
Doncaster were pushed late on by Sheffield in the South Yorkshire Cup but held out to start their pre-season in the way they mean to go on.

Lo opened the scoring with a try for Sheffield before Corey Hanson’s try gave Doncaster a 6-4 lead at the break.

Doncaster scored three tries in the second half to increase the lead to 22-4. Sheffield tried to stage a comeback and scored 3 tries of their own to bring it back to a one score game.

Ultimately Doncaster’s kicking was the difference between the clubs and their three conversions earned the win.

Wigan get towelled up by the Centurions in a trial lol? 50 points or something...
Reactions: zegy and bruce