Saw this article about 2 groups in Canterbury bidding for NSW CUP team based in Canterbury. Hope this is the right spot for this thread. My preference is for NZRL to run its own nationwide semi pro comp again... but facing reality NZRL cant even afford to send school boys rep teams to OZ or organize a game for an NZ residents side, so realistically what hope have we got of NZ semi pro comp?

In that case looks like NSW Cup side would provide semi pro League pathway to 25-30 locals. Hope the two bids can work together but my preference would be for Canterbury Rugby League & South Island Zone to run the side. The Celebration club bid was tied up with that joke Fiji/NZ Pacific Cyclones NRL Bid & after all they are only one club, the CRL & Southern Zone represents all the Clubs and districts in the South Island between them. Grant Matthew
Part of the capacity crowd at the Panthers-Warriors NRL game in Christchurch.

The Canterbury Rugby League and Christchurch's Celebrations Lions club are both considering bidding for a franchise in the new second-tier trans-Tasman competition.

The National Rugby League released its player pathways document last December, calling for the New South Wales Cup competition - effectively the NRL reserve grade - and the National Youth Competition to replaced by a Platinum League slated to start in 2018.

The Canterbury Rugby League (CRL) has set up a working group to investigate the potential of a Platinum League franchise in Christchurch.

Celebration Lions Community Sports and Education Trust director Corey Watkinson has also confirmed his organisation is "definitely interested in the potential for a state league licence". 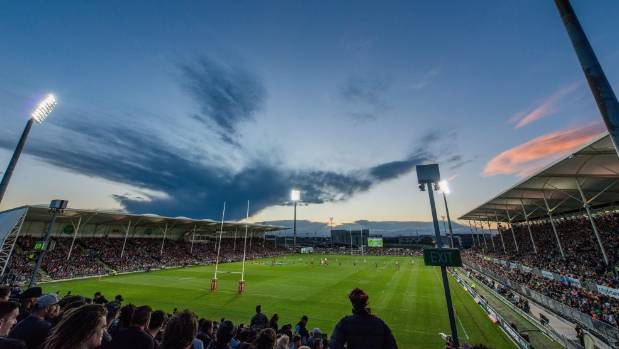 Kai Schwoerer
A general view of a sold out AMI Stadium during the Panthers-Warriors game in May.

"We see a lot of potential for the South Island league clubs as a pathway [to the NRL]," he said.

The Celebration Trust plans to convene a meeting of Canterbury clubs within the next month to "to have open disclosure and transparent discussion and see a mandate from the clubs to support the bid".

Watkinson, who said Celebration had been working on the concept for almost two years, said his organisation would take "three games a year [out of Christchurch] to Tasman, the West Coast and Otago".

Acting chief executive Steve Martin said the Canterbury Rugby League was "interested in looking at the possibility" of a bid.

"We are still waiting on further information from the NRL, via New Zealand Rugby League [NZRL] as to what the final shape of the new competition would look like," he said.

Rugby league insiders expect it would cost around $1 million a year to field a Christchurch team in a trans-Tasman competition.

Martin said the CRL could not fund that on its own and commercial partners would be required.

The CRL has established a working group to look at the concept. Various stakeholders will be involved, including the NZRL Southern Zone and the Christchurch City Council.

Martin, who is the NZRL Southern Zone general manager, said the prospect of a Platinum League team in Christchurch would "have an influence on the South Island rugby league community".

The working group would have to consider the financial viability and support base for a Christchurch-based franchise, he said.

Martin said May's NRL game in Christchurch between the Penrith Panthers and the Warriors - which drew a capacity crowd of 17,669 to AMI Stadium - showed there was an appetite for high level rugby league in the South Island.

The advent of a rugby league facility at the new Nga Puna Wai sports complex in south-west Christchurch, with a 2500-seat stand, meant the CRL "is probably going to be in a position where the opportunity [for a Platinum League franchise] can be taken up".

There was also a possibility that Christchurch would host games at the 2017 Rugby League World Cup to be held in New Zealand and Australia.

Martin said the CRL need all its clubs behind the proposal "before it had a mandate to push on with it".

Wallace, a CRL board member and former Canterbury representative, promoted the Panthers-Warriors club and has arranged for Penrith to play a home game in Christchurch for four consecutive years.

He said the CRL was waiting for more information from the NRL on whether a Canterbury franchise "would be aligned to the Warriors or another NRL side, the Panthers, for example".

Wallace, who had extensive dealings with the NRL leading up to the Panthers game, said the NRL had "a real desire to expand the game".

"From what we know of this opportunity, the NRL want to recreate a second tier competition that has its own following and brand recognition, like the minor league baseball model in the US.

"They see New Zealand as a massive growth market, along with New South Wales Country and Queensland Country."

Wallace said the Platinum League clubs would have players with NRL experience.

"We'd have NRL players playing in Christchurch every [second] week."

Wallace said there was talk of the Platinum League introducing 16s and 18s junior competitions in 2020, which would provide a pathway for aspiring youngsters to "stay in Christchurch and still play at a high level".

Be interesting to see if they succeed. Theres a few Aussie teams trying to get their foot in the door as well as a Fijian bid. Wonder if the Christchurch team would have Warriors reserve graders making up some of the numbers or whether Christchurch will try fill their quota locally? You'd think they would have to act as a second Warriors reserve grade team until another NZ team get an NRL licence...
Reactions: matiunz

Contributor
Not sure the rules around but would like to see it act as a second warriors reserve grade focusing on the non-Auckland players the other clubs the other clubs seem to target and I think it would be wise to look at options in the Queensland cup for either this or another NZ team.
Reactions: eudebrito and bruce

matiunz said:
Not sure the rules around but would like to see it act as a second warriors reserve grade focusing on the non-Auckland players the other clubs the other clubs seem to target and I think it would be wise to look at options in the Queensland cup for either this or another NZ team.
Click to expand...

I agree. The talent coming out of the Quuensland bush is more numerous than the NSW bush.

Scary seeing the numbers written down, 30 a year is a lot of good kids being lost.

Think about how much stronger our local competition could be (let alone the Warriors) if they were to stay.

New Zealand needs another NRL team so that we have the money and pathway locally to keep these players.
Reactions: Sup42

razzrillinger said:
Scary seeing the numbers written down, 30 a year is a lot of good kids being lost.

Think about how much stronger our local competition could be (let alone the Warriors) if they were to stay.

New Zealand needs another NRL team so that we have the money and pathway locally to keep these players.
Click to expand...

but of those 30 how many are actually even making it to NRL level. I would much rather they work out how to pick those players and focus on them and their development. They cant be taking on 30 a year and stay financial.
Show hidden low quality content
Share:
Share