Any posts about sacking Cappy and discussions about his replacement can be posted at the link below. Please dont post it here.

Another bullet point about to be added?
Reactions: Richie 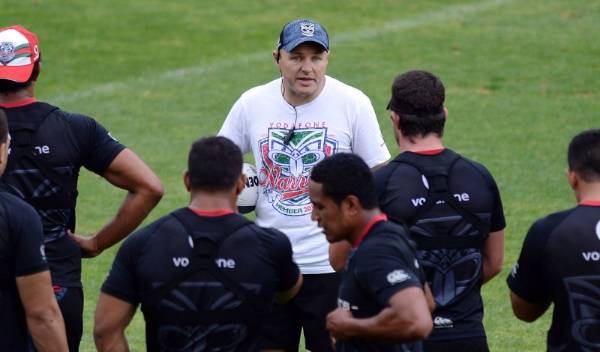 "I have learned a lot from Matt and am saddened that he has made this decision. It speaks volumes of his character and integrity and I personally wish him well," he said.

In announcing McFadden's interim appointment, Vodafone Warriors chief executive Wayne Scurrah said: “Andrew is widely recognised as a leader of the next generation of coaches in the very competitive NRL competition."

The Vodafone Warriors have their third home game of the season next Sunday (April 13) when they host Canterbury-Bankstown at Eden Park (4.00pm kick-off).

McFadden will be available to meet the media later today.

Sack him!
Reactions: Hadyn, Dropped Balls, HD and 5 others

View updates to this showcase item...

All I can say is, good luck Andrew.
Reactions: 95tilinfinity and ramraider78

Can we start a bet in bookie as to how long before the players turn on McFadden?
Last edited: Apr 7, 2014
Reactions: 95tilinfinity, ¿N. ig-mah¿, Zarjaz and 3 others

Anyone know what kind of a coach this guy is? He has always come off as a bit soft in interviews, but who knows what he's like in the sheds.

I gotta say I'm pretty excited about this. Elliot was never 'the guy', so this has been a long time coming. I just hope that McFadden actually has a chance to stake his claim as coach and hasn't already been told he's just warming the seat for Sheens or whatever.

Bring on the team announcement. Hopefully we're over having to see Mateos fat frame in a Warriors jersey and he can live out his days in NSW cup.

Point was made this morning on Live Sport that all of sudden McFadden is one of the biggest people in NZ League as Warriors coach and Kiwis assistant and not many know who he is.

(that point was followed by Tony Kemp calling him a nobody who shouldn't have gotten the Kiwis gig. Bitter?)
Reactions: Sup42, snake77, eX | Machina and 2 others

Good luck to McFadden, IMO it's positive to bleed a Rookie coach through but in these circumstances I don't know, would of hoped this didn't play out until the season was over.
Reactions: tajhay

does a rookie coach have the balls to tell these guys to man up?
does he have the intestinal fortitude to sack/drop players?

Contributor
Were any of the team he was assistant coach for successful?

Ranger said:
Point was made this morning on Live Sport that all of sudden McFadden is one of the biggest people in NZ League as Warriors coach and Kiwis assistant and not many know who he is.

(that point was followed by Tony Kemp calling him a nobody who shouldn't have gotten the Kiwis gig. Bitter?)
Click to expand...

McFadden is on a hiding to nothing, a lame duck caretaker coach. If the rumours are true that senior players wanted Elliot to allow them a more ad-lib style of footie, any structure, plans, etc that McFadden had in mind contrary to that style won't be adhered to by the players. In which case, if the players play as they want and it fails miserably, they should be shown the door.
Reactions: Sup42

Do we get to judge McFadden after round 6?
I'll be judging him on the selection or non selection of Mateo this week.
Reactions: Hadyn, Mr Frank White, Hitman82 and 2 others

very highly regarded at Canberra though jumped ship because Furner wouldn't let anyone else have any input into game plans etc, from memory Catalans made the challenge cup final in 2007 and then in 2008 reached there first ever superleague finals series

View updates to this showcase item...

He was Elliot's assistant ...twice.
If he had radically different ideas to Matty why would he be his assistant?
More of the same from a less experienced coach.
Thanks Wayne!
Reactions: ¿N. ig-mah¿, Sup42 and Haydos

way2sharp said:
He was Elliot's assistant ...twice.
If he had radically different ideas to Matty why would he be his assistant?
More of the same from a less experienced coach.
Thanks Wayne!
Click to expand...

Elliott's ideas weren't exactly the problem though; the communication of those ideas to the players is where he fell down. If McFadden has picked up the same kind of ideas but can actually speak to the team without losing them, then that's not a bad thing.
Reactions: SilentOne and DavidMcKay1974
Show hidden low quality content
Share:
Share