Salford still have to play Leeds, Toronto, Toulouse and London - so their future is in their own hands!

Caught both the Rhinos and the Wolfpack games. Leeds are starting to worry me, I’d hate to see them become a Bradford.
Wolfpack looked a little nervous and patchy, they’ll have to step it up if they’re gonna be competitive in the top flight
Toggle signature
This year yet?
Reactions: Lord Gnome of Howick MBE

Appears to be Salford v Toronto and Catalans v St Helens televised this side of the world
Toggle signature
This year yet?

matiunz said:
Appears to be Salford v Toronto and Catalans v St Helens televised this side of the world
Click to expand...

That's it. Those two games plus all the NRL play off games are on Sky UK this weekend
Reactions: Lord Gnome of Howick MBE and matiunz

If Toronto upset Salford it’ll throw a cat amongst the pigeons.

Toronto lucky to get away with a win, had there been a video ref their first try wouldn’t have been awarded.
Both teams need to cut out mistakes if they want to go up though
Toggle signature
This year yet?
Reactions: mt.wellington and Lord Gnome of Howick MBE

Few big Scalps from the championship teams over the super league teams this weekend, good to see London, Toulouse and Toronto get up.
Vikings are doomed to be relegated aren’t they? Few ex Warriors in Inu, Ah Van and Gubb (who got ktfo)
Toggle signature
This year yet?
Reactions: Lord Gnome of Howick MBE

If they weren’t already knackered, Widnes game at the weekend was last chance saloon. Certainly relegated now. The teams currently on 6 and 8 points will have a hell of a scrap for the promotion places, Salford may now be dragged into that after their weekend loss

It’s all going down to the wire for the promotion spots!

By Gavin Willacy for No Helmets Required


This week will take some beating for entertainment: four games to decide six clubs’ future. Any of the Qualifiers’ top six could seal a place in the Super League or be in the win-or-bust Million Pound Game, while one of London Broncos, Toulouse, Toronto and Hull KR are going to find themselves preparing for the Championship again. The Qualifiers: the gift that keeps on giving. Well, for a few more days anyway.

It’s a shame Sky have opted to spread the games over four days. Yes, it means three of them are televised live but what a wonderful TV event it would be if all four were played at the same time, going from game to game with every twist and turn. London head coach Danny Ward rightly called it “odd” and admitted it gave the Broncos “a bit of an advantage” when they play Halifax on Saturday.


This crazy climax was caused by three Championship clubs beating Super League opponents last Saturday. While Toronto confirming relegation for Widnes was no real surprise, London’s gritty defensive display to hold out against a strangely lacklustre Salford was, and then came Toulouse turning around a 19-0 defeat to beat Hull KR in Blagnac.


So how have Toulouse gone from being pushovers in London two weeks ago to deserving a point in Toronto, then getting two against the Robins? “The London game was the push the guys needed,” says Toulouse winger Chris Centrone. “London outplayed us in every way. It felt worse than any other loss and gave us a tough run to the Million Pound Game. But we play our best footy in pressure situations. We somehow enjoy making it harder for ourselves.”

Signed from Australia’s second tier this summer, the Italy international identified a team spirit issue that needed addressing. “We lacked the consistency of a full-time side. That showed even before I arrived,. We had to improve on that. We found ourselves drifting away from our game plan. I hadn’t encountered anything like it before in terms of the attitude of some of the French guys. They put their heads down very quickly, were defeated immediately if something didn’t go their way.

“That attitude towards any given moment during the game – positive or negative – has changed now. Instead of getting angry with each other and throwing their hands up in the air, the guys are getting behind each other and building a bond. It’s a culture we’re trying to instil. We’re all on the same page now. And when we’re really connected, we put big scores on people.”

Barring a Halifax-inspired miracle, defeat at Salford on Thursday night will end Toulouse’s season. Win and they put tremendous pressure on Toronto to get at least a point at Leeds 24 hours later.

“We are expecting another tough battle for sure,” says Centrone. “Salford have been so dominant through this middle 8 and are playing with nothing to lose. [Salford would only fall into the Million Pound Game if they lose and both Toronto and Hull KR win.] I hear the Broncos did a job on them in defence and came away with a win. Our attack takes care of itself so if we can sure up our defence we’ll be in with a real chance.”

Of the Championship contenders, only Toronto are ready for the Super League right now. Their successive 8,000 attendances have been bettered only by Leeds, Wigan, Hull, Warrington and St Helens in the last fortnight. Meanwhile there were only around 600 London fans at Ealing on Saturday and promotion is unlikely to cause thousands of lapsed Broncos fans to emerge from the gloom of four years out of the Super League spotlight. Toulouse have struggled to get more than 2,000 to most games this year, and none of the three’s home grounds currently meet Super League criteria. But any of them could be promoted. 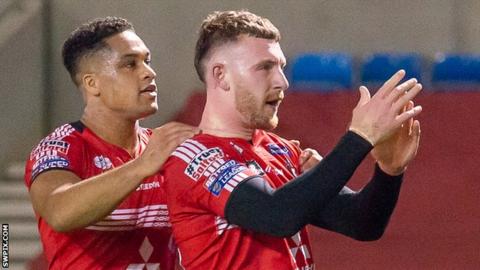 This result puts them on 10 points with Leeds and two points clear of Toronto and Hull KR below them, with an unassailable points difference of 143.

Toulouse, whose promotion hopes look beyond them with just six points, fought back to 14-10 at one stage.


However, Salford's top-level experience proved key as they pulled clear.

The end-of-match score-line did not reflect the quality that Toulouse displayed throughout, and they were given a standing ovation by the home support, who were able to celebrate their return to the top tier next term.

Having lost at Championship side London Broncos last weekend to leave nerves jangling, Ian Watson's side ensured there was to be no further hiccups in the Qualifiers.

Jackson Hastings' suspension coincided with Salford dropping their 100% record, but he returned to star in this success, scoring one try - an eight-point try - and kicking seven goals.

His former Manly teammate Joey Lussick crossed before Toulouse scored two tries from Chris Centrone and Stan Robin in a flurry of points either side of the half-time hooter.

That gave the visitors hope of an upset, but Greg Johnson's double added to Niall Evalds, Kris Welham and Tyrone McCarthy tries quelled the French side's spirit and relieved the tension.

Retiring prop Luke Burgess kicked a late conversion to add to the carnival feel late on.

"I'm relieved we've got the job done and we can move on now and plan for Super League next year.

"There's been a lot of adversity here with selling players and new owners coming in and not having much money but we've rectified it at the back end of the season.

"Our group is very good, the players and backroom staff, we have people we can trust and it's been a tough year but the supporters have been really good and patient."

"We can be extremely proud, today I'm disappointed with the performance, we pushed a bit too much and we wanted to score to put ourselves in a better position.

"I was disappointed we didn't play our game, but we have to remember where we came from. There were lots of young French players playing today.

"The last seven games have been such a learning curve, we learned so much and it can only help us in the future.

"One day I hope Toulouse are in Super League because it will be big for rugby league in Europe."