eudebrito said:
With the reduced interchange
Click to expand...

What is the new interchange rule?

Lord Gnome of Howick MBE said:
What is the new interchange rule?
Click to expand...

Reduced down from 10 interchange to 8.

Also some time restrictions on setting scrums and at a few other points of the game (goal line drop puts?). Todd Greenberg used the term shot clock for the new policies. Not sure how they will be named during the season. The theory is the reduced interchange and less time spent setting scrums will create more fatigue.

Chances are a lot of sides have been doing a lot more endurance work through the pre-season. It will be interesting to see weights of some of the bigger packs like the Bulldogs next year.
Reactions: 1 user

ToiletDuck said:
You'll all be pleased to know that Matty Johns has predicted we'll again miss the 8. Can't blame him though can we, history is on his side.

Here's what he predicts, for what it's worth: Broncos, Cowboys, Roosters, Rabbitohs, Storm, Sharks, Bulldogs and Dragons
Click to expand...

This is the type of thing the club needs to fix. The perception they won't make the 8 because you know shrugs the shoulders; Warriors. This would take years of consistency even 5 years in the top 8 with a premiership followed by a shit year would probably have the same predictions the following year.

We are big, inconsistent just like the Sharks are boring and drag you down to their level. Other teams in the NRL have perceptions about them just like the Eels are slippery; OK couldn't resist that one.

I can't get mad at Johns for that. It is the hole we have dug ourselves into over the last 20 years. Besides there is plenty of time from March to October for him to fire me up. We just need to win a few games and he'll be on about how dangerous we look with Roger Tuivasa-Sheck, Luke and Johnson. That will be followed by "They need to win away from Mt Smart and sustain this form; but you have this feeling about the Warriors".

The top 8 predictions are nice to see. It also give analysts something to laugh about at the end of the year with their crazy predictions. Lets just hope the guys who picked us to miss out we end up proving wrong and not living up to the perceptions about us.

Nrl.com picking the Warriors to finish 8th, its all about defence which is what everyone was saying last year aswell. Edge defence will be key in those first 6 rounds which has pretty much indicated how the Warriors season will go in recent years.
Reactions: 1 user

Johns' top 8 looks a little lazy. Usually he chucks in a bolter or a slider to get people talking, but it looks like he's just looked at last years top 8 and said "yup, that'll do".

Contributor
Will try this again, now the season has got a bit closer, some pretty good teams are going to have to miss out (please don't be us)

Cowboys 2
No team ever (EVER!) repeats as champ in the modern NRL, but some go close, these jokers should go close, expect Jesus Thurston to rest more games than usual, has already decided the indigenous game wasn't worth his time, bad karma JT.

Sea Eagles 3
Changing of the guard from previous years, but lots of quality players in the first 13, Toovey probably deserved a chance with these new recruits, Trent Barrett aye, how many *star* players become successful club coaches… getting a win against them probably not as much fun without the threat of investigations in the press conference.

Sharks 4
Tricky one, some key forwards are getting older and slower, but they have a real backline for the first time in what seems like decades, should make it on paper, but bugger all depth if they get injuries. Also lacking in comedy this year, seem to be alarmingly stable, boring even. Where's the drug abuse and pissing on yourself?

Storm 5
Will make the 8, won't win the comp, which of the big 3 will lose their playing ability first? Will it happen this year? Slaters body seems the closest to falling apart. At what point does eeking out a last few origin wins while they can take priority for these blokes? Young kiwi forwards of the storm, you should really think about joining a team that isn't hamstrung by interstate games every year, a team that will appreciate your efforts as individuals, instead of as faceless cogs in the purple machine..

Rabbitohs 6
Its good to have the talented Burgess back, at least until the refs return to showering him with penalties for dropping the ball and walking off the mark. Top heavy team, handful of expensive stars, more journeymen making up the numbers than usual. Good to see Rusty Crowe injecting some life into the offseason, "mixing prescription drugs is for pussies, lets get on the beers and i'll teach yous about some fukcing footy!"

Warriors 7
It could go so, so well, free scoring, entertaining, winning, crowds pouring in, srsly there is a chance here to vault the club into the front of the sporting landscape in NZ, All Blacks have nothing of interest going on this year, super 12 has become a farce... it could go really wrong too… star players go down hurt, coaches fired, media scorn.. (if you think we've seen scorn about under-performing before...) forum collapses into anarchy. Probably safe to assume a middle ground, but next year.. oh just wait for next year...

Bulldogs 8
More of the same, Hasler might need to start innovating around the obstruction rule again, the same old stuff might not cut it with other teams improving. Always some fun subplots with this team, which will we see more of, James Graham ignoring the concussion rules or Josh Reynolds attempted tripping incidents? And will either get serious punishment? Unlikely! Almost as if their old boss runs the NRL or something.

Roosters 9
Looking like a everything that can go wrong, will go wrong, kind year for them, like Manly last year, too many injuries, departures and distractions, taking a step back before before Hayne, SBW, join for 2017. Probably get Robbie Farah, Greg Bird, Aaron Woods and Shaun Johnson under the cap for next year too.

Dragons 10
Some teams gotta miss out on the 8 to make room for the mighty mighty Vodafone Warriors, surely this year their curse against St. Merge ends in Rd 9?? The boys will fired up after that trial embarrassment?? Right?? Probably not. Bunji proved his point last year about not being washed up, does he go back to his Tigers days of giving zero fucks about it all?

Raiders 11
Surprise packets last year, but relied a bit too much on Blake Austin magic, chances of that happening again? A lot of decent to good players, lack a bit of out and out class, on the improve, but the coach always a wildcard, is overdue for a meltdown about something irrelevant.

Eels 12
Should be feeling pretty pleased with themselves after the offseason, on paper have very dangerous backs and some solid forwards, if they could shuffle Watmough into the Hindmarsh retirement home for broken down backrowers still hanging on for the paycheck, that would help. But its the Eels, surely at least one off field cock up derails a promising season.

Panthers 13
Bit of Warrior syndrome going on here, unexpected finals run is followed by a year ruined by injury, but debut a lot of youngsters, things are looking up? Then they fire the coach who had brought them some success, bringing in a proven failure instead. Approach with caution, all possibilities in play.

Knights 14
Crashed to the bottom and cleared out some old timers, will be troublesome on their day, but going to be a lot of rookies dragging them down. Rebuilding with a capital R. Check back in 2018.

Tigers 15
Should be in a neck and neck race for last place, the coach is a joke and they keep seeing their good players walk out the door and don't bother to replace them. NSW rep hooker Robbie Farah riding the pine should be good comedy, first Sydney team to lose their hooker to injury gets him for a discount right?

Titans 16
Pretty terrible roster, but could say the same last year and were competitive more than you'd think, surely the teams with more talent (which is to say, all of them) will keep them on the bottom.
Reactions: 5 users

I think the trend of the NRL getting harder and harder to predict is in full swing. I thought last was hard to guess a top 8 - this year is significantly harder.

You've got two top four teams in the Broncs and the Cowboys who are virtually unchanged. One with probably greater motivation this year, and one with unquestionably less (going back to back is way, way too hard, especially for a club winning its maiden premiership - that would suck so much emotion out of you). But, regardless of the situation, you've got to give two spots in the top 8 to these two.

Then you have three teams in the Roosters, Storm and Bunnies who have all been dominant in the last 4-5 years. All excellently coached, with enviable rosters, but equally, all with problems coming into this season. The Roosters problems are well documented, but losing your star fullback; 5/8; possibly halfback; your strike centre, this year; as well as your forward enforcer (JWH) and glue (Cordner) for the start of the season is a serious mountain to overcome. If they get behind the eight ball too early, they may really struggle to recover. Then you have the Bunnies with massive reports of rifts coming out of their camp, and have been for a while - between Crowe blowing up at players, Burgesses return squeezing out popular members of the squad and the fairly regular whisperings of the players discontent with the coach... All is not happy in Bunny land. And finally the Storm, who's biggest issue is their aging star trio... Can they really keep it going another year? Probably.

Then there's the Bulldogs, Sharks and Dragons. Finalists last year, but in my opinion, shaky ones. The only one out of these three to genuinely improve their roster is the Sharks. I think the Dogs will really struggle with this interchange rule change, as well as - in my opinion - their complete lack of halves, and lack luster outside backs. The Dragons... Well, they're hard to read.

Then you have the chasing pack from last year, who all share a common theme. Between us, the Eels, the Panthers and Manly, we have all in some way DRAMATICALLY improved our rosters - us, the Eels and Manly through imports, the Panthers through a huge return to health. Not everyone one of these teams is going to miss playoffs. In fact, I'd be surprised if less then half made the playoffs. Hmmm.

Then you have the Raiders, who to me are like the Dragons, really tough to read.

Before finally we get to the bottom feeders, Knights, Titans and Tigers. Sorry guys!

So, with that said;

Wish I was that confident. At the moment I'm leaning more to us being in the top 16.

If Maquires ready to move tho.
Reactions: 2 users

surfin said:
If Maquires ready to move tho.
Click to expand...

I wonder how much that has to do with the Gladiators eccentric behaviour, shagging players mums, and blowing the cap on a prop. 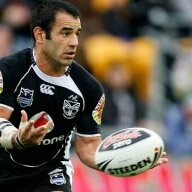