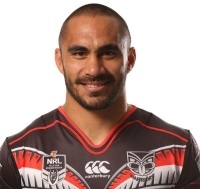 The son of James Leuluai and part of the famous Leuluai Rugby League family he was the youngest player to ever debut for the Warriors. He became the second youngest Kiwi Test player (barely 18) when he debuted against Australia in July 2003. He had limited first team experience at New Zealand Warriors with competition from New Zealand internationals Stacey Jones and Lance Hohaia. He spent most of the 2003 season in the Bartercard Cup playing for his youth club Otahuhu-Ellerslie. At the end of 2004, he left the Warriors after playing 21 first grade games and scoring two tries.

In 2004, Leuluai signed a contract with Super League side London Broncos. He spent two years at the club playing 38 games and scoring 19 tries. Both seasons were affected by injury.

Leuluai agreed a three-year deal with Wigan Warriors in December 2006. In April 2009, having made over seventy appearances for the club, Leuluai extended his contract with the Wigan Warriors by three years to last him until the 2012 season. He helped Wigan to their first Championship since 1998 with a man-of-the-match performance in the 2010 Super League Grand Final earning him the Harry Sunderland Trophy.

In November 2011 Leuluai announced he had signed a three-year contract with the New Zealand Warriors starting in 2013. He has since re-signed to an extended contract.