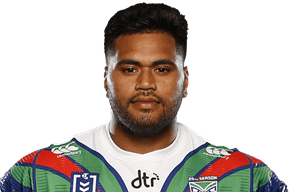 Lisone has quickly become a dominant force in the game.

Emerging out of Tangaroa College, he started to gain traction as a prop with the Otahuhu Leopards.

With his imposing frame, Lisone consistently brought his physicality on both sides of the game, shedding tacklers on attack and shutting down runners on defence.

He was brought into the Vodafone Junior Warriors squad for 2013 and his impact was immediate. Lisone was one of only three players to play in all the team’s 28 matches and he scored six tries. He has mixed appearances in the NYC and the New South Wales Cup in 2014, excelling for both teams. He has also been the NRL side’s 18th man in 2014.

Alongside Mason Lino in 2014, Sam captained the Vodafone Junior Warriors to the NYC title and was also named in the overall NYC Team of the Year. As well as that he was named the club's NYC Player of the Year and represented the Junior Kiwis against the Junior Kangaroos at the end of the season.

Already signed to the club's fulltime NRL squad, Lisone was outstanding in all he did during the offseason resulting in him representing the Vodafone Warriors at the 2015 NRL Nines, appearing the trials and being rewarded with his NRL debut in the opening round of the season against the Knights. He relished the opportunity and became an interchange regular in the first half of the campaign. He also had his contract extended to the end of the 2018 season as the club underlined his place in its future.