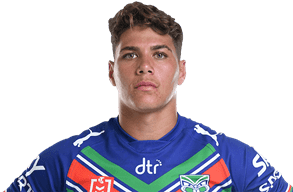 Warriors Debut (Date and Match Details)
Round 7, 2021 vs Melbourne Storm

Reece Walsh was born in Southport, a suburb of the Gold Coast, Queensland, to an Indigenous Australian father, and a Māori mother from Hastings, New Zealand. He was raised by his father and stepmother in Nerang, Queensland, and grew up playing for the Nerang Roosters.

He attended Keebra Park State High School before being signed by the Brisbane Broncos.

In 2018, Walsh represented the Queensland Murri under-16 and Queensland under-16 sides. In 2019, he played for the Tweed Heads Seagulls in their National Under-18 Title and Mal Meninga Cup-winning sides while he also spent the year training with the Brisbane Broncos NRL squad. In June 2019, he represented Queensland under-18, scoring a try in their 34–12 win over New South Wales. In September 2019, he represented the Australian Schoolboys, scoring a try in their 36–20 win over the Junior Kiwis.

In 2021, Walsh joined the Brisbane Broncos NRL squad on a development contract.[9] He began the season playing for the Norths Devils in the Queensland Cup.

On 18 March, Walsh signed a three-year contract with the New Zealand Warriors, beginning in 2022. On 10 April, he was released early from his Brisbane contract to join the Warriors immediately.

On 25 April, in round 7 of the 2021 NRL season, Walsh made his first grade debut for the Warriors against Melbourne.

In May, Walsh confirmed his allegiance to Queensland and Australia over New Zealand. It was confirmed on 21 June that he had been selected to play as fullback for the Queensland Maroons for the second game of the State of Origin series. At 18, he would have been the youngest player to be selected in the Queensland team since Ben Ikin in 1995, however he was ruled out due to an injury.

In round 23, Walsh had a disappointing afternoon with the goal kicking duties only managing to convert one goal from five attempts, including a conversion attempt near the touch-line late in the game which would likely have sent the game against Brisbane into extra-time. New Zealand lost the match 24-22 which effectively ended their already slim chance of reaching the finals.

On 25 September 2021, a video emerged of Walsh being arrested by police at a Surfers Paradise nightclub. The following day, Walsh fronted the media and said that he had failed a previous move on order by the police. He then went on to say “I didn’t move on. That led to me getting arrested and taken back to the police station. Once I got back to the police station I got searched and I was in possession of a small bag of cocaine – which I had some during the night.

"No-one else is involved in this. It is solely on me. I put my hand up – I should never have done it. It is a mistake I made. I want to say sorry to sponsors, fans, the Warriors". He was handed a $5000 fine and suspended for two matches over the incident.

On 20 June, Walsh was selected in the extended Queensland Maroons squad for State of Origin Game 2, however did not play.

On 6 July, Walsh was granted an early release from his New Zealand contract to re-join his former club Brisbane starting in 2023. Walsh cited a relationship breakdown as the reason for the move. He had also reportedly turned down a $2.8 million offer from new NRL franchise The Dolphins in favour of signing with Brisbane.

On 7 July, Brisbane Broncos officially announced his return to the club, on a 3-year deal.
Share:
Share