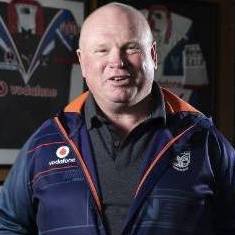 Peter O'Sullivan is considered one of the best game's best judges of talent, having unearthed a slew of superstars including Greg Inglis, Roger Tuivasa-Sheck and Israel Folau. More recently, he has been credited with bringing exciting fullback Latrell Mitchell to the Roosters.

O'Sullivan has been sidelined since mid-August 2016, with the NRL opting to suspend him after he responded to an intention to cancel his registration. It's understood O'Sullivan is considering whether to appeal the decision.

The sanction against O'Sullivan, one of the best talent spotters in the game, relates at least in part to his association with notorious punter and brothel owner Eddie Hayson.

Hayson, who deposited more than $700,000 in O'Sullivan's TAB account over a number of years, denied he ever gained any financial benefit from their friendship.

O'Sullivan was at the Melbourne Storm during the salary cap scandal but escaped sanction. Former NRL chief executive David Gallop said only legal advice prevented the governing body from recommending O'Sullivan be sacked from his subsequent job with the Roosters.