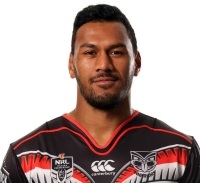 John Palavi is yet another product from St Paul’s College where he was head boy and school dux in 2010. He had to juggle his studies with his sporting pursuits, making his NYC debut for the Vodafone Junior Warriors in 2009 while still in his second-to-last year at school. By the end of his high-school years Palavi had made 15 appearances for the side. This juggling act continued in 2011 as he had to balance medical studies at university with his role in helping the Vodafone Junior Warriors to a second-straight premiership. He was duly rewarded for his dedication to both endeavours by being named the club’s Vodafone NYC Player of the Year for 2011 as well as winning the overall NYC Academic Player of the Year Award.

Palavi was recognised once more when he turned out for the Vulcans in the New South Wales Cup in 2012, winning the team’s Rookie of the Year award. He was a NSW Cup regular for the Vulcans in 2013. After an impressive showing in the preseason ahead of the 2014 season, ‘JP’ was named in the starting line-up for the Vodafone Warriors’ first-round NRL clash against Parramatta on March 9. He became Vodafone Warrior No 188.