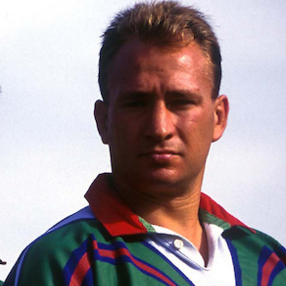 If anyone knows what this player is doing now please let us know by posting or messaging admin. Thank you

Rated the best centre in the world by former NZ coach Graham Lowe in the late 1980s, the Kiwi Test star’s time with Easts was marred by suspension and injury. Bell, who made the first of 26 Test appearances in 1983, first played in England with the Carlisle club in 1982-83. The fiery winger/centre turned out for Leeds in 1983-86 before returning to Easts for the part of the 1988 season.

Bell mellowed and matured as a player, and captained the Kiwis to a Test win over Great Britain that year.

He later led the champion Wigan club during its dominance of English club football in 1991-94.

After a decade with Wigan, Bell returned to NZ in 1995 to become the inaugural captain of the Auckland Warriors before seeing out his career with Leeds in 1996.