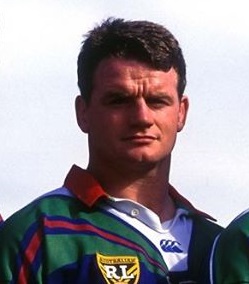 Great Britain Test forward played for St Helens (1982-87) and Wigan (1988-94) during his English career before joining his former Wigan coach John Monie and fellow team mates Dean Bell, Denis Betts and Frano Botica at Auckland for the Warriors’ debut season in the ARL. Platt played 35 games for the Warriors during the 195 and 1996 seasons.

Platt is only one of 3 players who have gained caps for England while playing for the Warriors. The other 2 are Denis Betts and Sam Tomkins.

Platt, who made his Test debut against France in 1985, also appeared in the 1995 World Cup, four Ashes series (1986, 1988, 1990 & 1992), won six Challenge Cups and five English Championships during his career. The 25-Test veteran finished his playing career with Salford in 1998 before taking on the coaching position with Workington in 1999. Having spent an English off-season with Brisbane Wests in 1985 Platt returned to Queensland, married and was later assistant coach of the club. Andy would finish his career with some 570 First Class games under his belt.