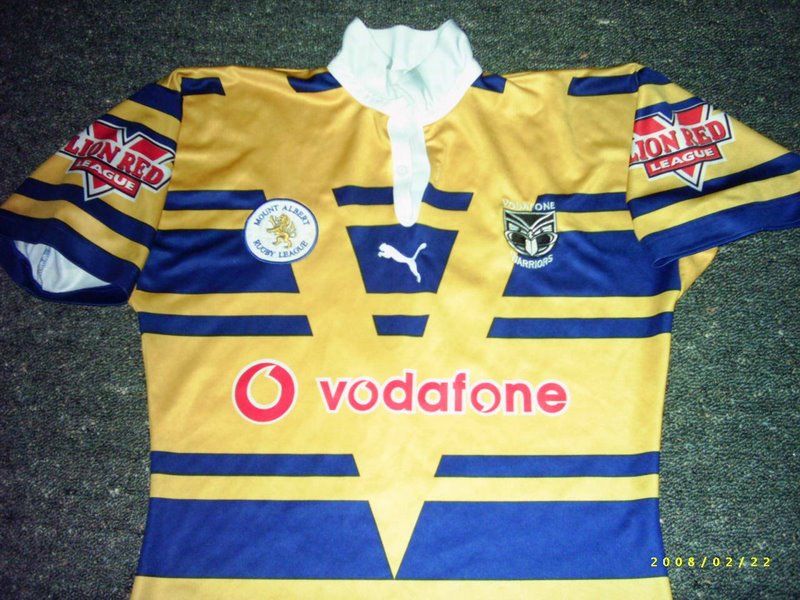 Referred to as The Warriors Mt Albert jersey. As far as Im aware there were only 20-30 jerseys ever made and almost all were auction off. One was kept by the Warriors, another was given to Mt Albert Rugby League club (Ivan Cleary's number 1 jersey) and even Helen Clark ended up with one.

Article below has everything you need to know about the reason why they wore it.

Vodafone Warriors Chairman Eric Watson confirmed today that his NRL team will play the South Sydney Rabbitohs at Carlaw Park on Sunday 24 February 2002 at 6.00pm. The encounter will be the Rabbitohs first appearance in New Zealand since their exclusion from the National Rugby League in 1999.

Daniel Anderson is expected to field a full strength team for the encounter.

Australia’s number one adjudicator, Bill Harrigan, will referee the Carlaw Park fixture and the Vodafone Warriors pre-season game against the Cronulla Sharks at Jade Stadium on 17 February.

‘This will probably be the last time a professional rugby league game is played at Carlaw Park,’ said Watson.

Over thirty years ago, on Sunday 29 September 1968, the Mt Albert Club of Auckland played the South Sydney Rabbitohs at Carlaw Park in a fixture billed as the Australasian Club Championship.

The Vodafone Warriors will commemorate the 1968 Australasian Club Championship and the players of that era by ‘turning back the clock’ on 24 February 2002 at Carlaw Park.

The Vodafone Warriors will appear in a replica 1968 Mt Albert strip and host members from the 1968 teams.

At that time Mt Albert were holders of the Fox Memorial Major Championship, the most prestigious trophy in New Zealand rugby league. They also held two other premiership trophies, the Phelan Shield and the Kiwi Shield.

On the Saturday prior to that historic event, South Sydney defeated Manly 13-9 in the Sydney Grand Final. Between 1965 and 1971 South Sydney had reached six grand finals, achieving victory in four.

The Mt Albert Lions of 1968 were coached by Gary Dick, a player-coach who moulded a bunch of mainly no-name kids in to a premiership winning team in his first year as premier coach.

Mt Albert were ahead of the Rabbitohs 8 – 7 at halftime before eventually succumbing 27 – 13 to a team now remembered as one of the greatest in the history of the Sydney competition.

The idea to ‘turn back the clock’ and honour rugby league heroes of the past arose out of a conversation over a social beer between Cavalier Tavern proprietor Ray Wilson, a member of the 1968 Mt Albert side and Vodafone Warriors chief executive officer, Mick Watson.

Mt Albert share a special relationship with the Vodafone Warriors. The concept of a New Zealand team competing in the Sydney competition resulted from the innovative actions of the Mt Albert club almost a decade ago. Mt Albert made the initial expression of interest to join the Sydney league.

‘Daniel Anderson has told me this will be no pre-season friendly. Our boys will be playing to win and trying to exact a bit of revenge for the Mt Albert team of 1968,’ said Eric Watson.

PLAYERS JERSEY - All were players jerseys and all were auctioned off. These jerseys use to pop up on online auction sites every now and then but they now seem to be in the hands of genuine collectors or enthusiasts.

They are very rare now and hard to get. Because of this they command top dollar.