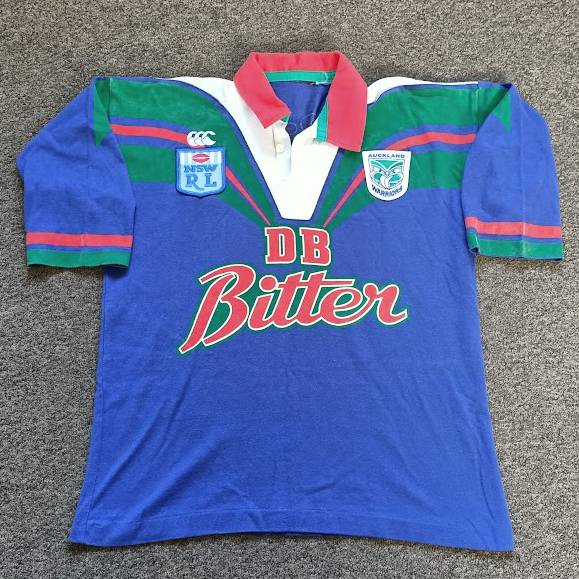 The Warriors jersey was officially released in March 1993. That same month the Warriors Scholarship Development squad would become the first Warriors team to play a game in the curtain-raiser for the Brisbane Broncos vs Canterbury-Bankstown Bulldogs match played at Carlaw Park, Auckland.


CHECK THROUGH THE IMAGE GALLERY OF THIS POST TO VIEW THE DIFFERENT TYPES AVAILABLE​
CCC type A - The jersey seen mostly worn by players in ads for the sale of the jersey and at the official launch had the chevron (the V's around the neck) and major sponsor sublaminated on the jersey like the two seasons after but what sets it apart is the placement of the CCC logo and the fact that the CCC logo is embroidered on. The following year would see the CCC logo placed below the NSWRL badge and sublaminated.

This jersey is very rare and I have only ever seen one for sale in the last 10 years.

CCC type B - I only know that this jersey exists from a picture in the A New Breed Rising book written by Richard Becht and published in 1994. The chevron has been made out of fabric and sewn onto the jersey.

This jersey is so rare its bordering mythical! Besides the black and white pic from the aforementioned book I have nothing else on it.

Peerless - Made in the same way described above for the CCC jersey type B but much rougher. DB Bitter and Peerless logos are laminated as well.

Only seen two jerseys. Quite rare but most people probably wouldn't care much for its rarity so I wouldnt place too high a value on it.
Share:
Share