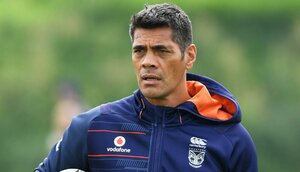 New Zealand Warriors head coach Stephen Kearney has signed a contract extension keeping him at Mount Smart Stadium until the end of the 2022 NRL season.

The deal will see the 46-year-old Kearney remain in the role for six seasons, joining Ivan Cleary (2006-2011) as the longest-serving head coach in the club’s history.

“Securing Stephen for another three years is a huge boost for us as we prepare to begin our 25th season in the competition,” said Warriors CEO Cameron George.

“We haven’t enjoyed a lot of stability as an organisation, especially in the coaching area. Without stability in our football department it’s extremely challenging to improve and to achieve continuity.

“It’s vital to have the right people in the right roles and in Stephen we have someone who absolutely fits what we need. He has all the characteristics you would want as both a coach and a person.

“We’ve been talking with Stephen for some time about ensuring he remains to continue the work that has been going on and we couldn’t be more pleased he’s staying on for another three years.

“He’s very professional, he has a very good relationship with his staff and players and has hands-on experience as a premiership-winning player, a Test player and a coach who has all the attributes need.

“Stephen is a big part of our future.”

After four seasons as an Auckland Warriors player from 1995-1998, Kearney is now on track to take his connection with the club to a total of 10 seasons with his new contract.

“When I first came back to the club, I was honoured to be given the opportunity to help the club move forward and improve,” he said.

“I’m pleased to have my future sorted out with this new contract and to know I’ll be with the club for a few more years.”
About author