Top 10 Under-rated Players In The Nrl 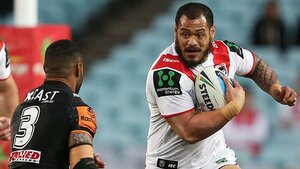 This is a list of the most under-rated stars of the NRL. These guys are more important to their side than their profile or pay cheque suggests they are.

Mitch Aubusson (Roosters)
The everywhere man for the minor premiers – Aubusson has done an admirable job for coach Trent Robinson be it in the back-row, in the centres or at hooker. Always reliable, Aubusson rarely makes mistakes and is a mark of consistency.

Blake Green (Storm)
One of the buys of the season – Green had failed to establish himself in his previous stint in the NRL with the Sharks, Bulldogs and Eels. He moved to the English Super League for four seasons and returned this year with the Storm, slotting seamlessly into the five-eighth role alongside Cooper Cronk.

Sisa Waqa (Raiders)
The former Storm winger played everywhere from his usual spot on the flank to centre and even fullback for the Green Machine in 2015. Waqa is a sound defender, a strong runner with the ball and great under the high ball. He has developed some strong leadership qualities at the Raiders.

Bodene Thompson (Warriors)
Showed glimpses of his talent in stints with the Titans and Tigers in recent seasons but returned home to New Zealand to play for the Warriors in 2015. He immediately found a home in the back-row and developed a dangerous attacking combination down the right edge with Shaun Johnson.

Elijah Taylor (Panthers)
The former Warriors lock has become a vital cog in the Panthers line-up under his old mentor Ivan Cleary. A workhorse on defense and a more than capable ball-player, Taylor has become a leader of the side and shapes as a possible captain of the side in 2016.

Aiden Tolman (Bulldogs)
The player that often isn’t mentioned in a big Bulldogs pack but is the one to do the tough stuff. Tolman has become a leader of a pack choc-full of representative players. He plays big minutes, is mobile for a front-rower and has added some nice ball skills to his repertoire under coach Des Hasler.

Nathan Peats (Eels)
Injury has derailed his past two seasons but he showed enough before he was struck down to suggest he is a future representative player. Creative out of dummy half and stronger than his frame suggests, Peats is vital to his side’s chances. He’ll be out to push for the NSW Origin hooker spot and to try and complete a full season injury-free.

Andrew McCullough (Broncos)
A tireless worker in the middle for the Broncos, McCullough is a sound defender and under-rated play-maker at dummy-half. One of the first players to progress from the Under 20s competition, McCullough can’t be far off a rep call-up.

Jason Nightingale (Dragons)
One of the most awkward looking players to have played in the NRL but also one of the most effective – Nightingale has been a proven campaigner over a long time for the Dragons. As safe as they come under the high ball, a courageous defender and with the ability to break the line, Nightingale is one of the best value-for-money wingers in the competition.

Michael Gordon (Sharks)
Despite being told he could look elsewhere mid-season and then told he had to stay, Gordon put together another tremendous campaign in 2015. The former Origin fullback was his usual secure self under the high ball and sparked the Sharks from the back with ball-in-hand. He heads to Parramatta in 2016 where his terrific goal-kicking will be a huge asset.
Reactions: 1 user
About author
Play The Ball
This article has been written by Dale Budge. Dale is a well known rugby league commentator and journalist, having covered the sport for over 10 years.