The Dally M system is broken 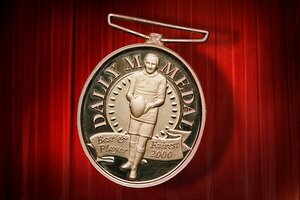 Chris Sandow ranked the fourth best player of the NRL season? Believe it. According to the Dally M judges he has enjoyed one of the best seasons of any player in the competition.

Chris Sandow. The guy Parramatta wants rid of. The guy dumped to reserve grade by coach Brad Arthur earlier this year. The guy that has never led a side to Finals football.

If there was ever proof that the Dally M system is totally, completely, utterly flawed, then his position on the standings would be the dictionary definition of it. Only Johnathan Thurston (19), Aaron Woods (18) and Benji Marshall (14) have more Dally M points than Sandow (13).

If I ranked the halfbacks at all 16 NRL clubs in order, Sandow would come in somewhere in the bottom three (along with Sam Williams and Jeff Robson) and easily the worst in terms of value-for-money. His side languishes in the bottom part of the ladder and his inconsistent play this year is a big reason for their struggles. Somehow though, on the back of three or four big games mixed between a bunch of shockers, Sandow is ranked as having had a better season to this point than the likes of standouts Roger Tuivasa-Sheck, James Tamou, Martin Taupau, Trent Merrin, Josh Dugan, Moses Mbye, James Roberts or Jack Bird (Blake Austin and Matt Moylan have the same number of Dally M points as Sandow).

The Dally M medal is supposed to be awarded to the NRL’s best and fairest player and while I have no objection with Johnathan Thurston leading the race midway through the season, the fact that Sandow even gets a mention destroys any credibility the concept has. I’d venture to say, if most NRL fans, coaches, players etc were polled, Sandow would feature on a shortlist of those players to have been the biggest disappointments this year.

The current system sees commentators like Brad Fittler, Darren Lockyer, Daryl Halligan, Greg Alexander, Gary Belcher and Mark Gasnier nominate points for each game on a 3, 2, 1 scale. I have no problem with the ability of those astute judges to identify quality play when they see it but the system makes the judges look incompetent. The system, in current format, rewards those players that produce a handful of big performances but doesn’t weight that against poor performances. It doesn’t consider consistently good play – only one-off performances.

In 2014 the Dally M medal was jointly awarded to Johnathan Thurston and Jarryd Hayne – two deserved winners. They each polled 32 points upon enjoying consistently strong performances all season. But, someone in an up-an-down team could have picked up three points in 11 games and been downright awful in the other 13. In collecting the maximum points on offer 11 times, they would have outscored both Thurston and Hayne and beaten them for the medal. Someone like Shaun Johnson would fit that mould – good when the Warriors win but quiet or poor when they lose. A player who plays well for half a season should not win the top award in my opinion.

While there is no perfect model for judging something like this (it is totally subjective after all) getting those same judges in a room at the end of the season to debate an overall winner would be more reliable. I wrote for Rugby League Week many years ago and gave all participants a ranking out of 10 for their performance at each Warriors home game. That system has the odd flaw but would be a much better bet than what is currently in use.

Interact and discuss this piece with the author via the Twitter handle @playtheballnz
About author
Play The Ball
This article has been written by Dale Budge. Dale is a well known rugby league commentator and journalist, having covered the sport for over 10 years.