RTS in and two debutants named

You are using an out of date browser. It may not display this or other websites correctly.
You should upgrade or use an alternative browser.
Prop Jamayne Taunoa-Brown and young second-rower Eliesa Katoa are poised to make their NRL debuts when the New Zealand Warriors open their 2020 campaign against Newcastle at McDonald Jones Stadium on Saturday (3.00pm kick-off local time; 5.00pm NZT).

Taunoa-Brown, who also has Maori heritage, featured in the club’s final NRL trial against Wests Tigers in Rotorua on March 1 and now has his first-grade opportunity after playing in lower grades during stints with the Melbourne Storm and the Newcastle Knights as well as Norths Devils when he was with the Brisbane Broncos.

Joining him among the four players listed in jerseys 14-17 is another big man in 20-year-old Katoa, signed by the Warriors after standing out for Tamaki College in the Auckland First XV rugby union competition.

Katoa has impressed throughout the offseason after having his first taste of rugby league with the club’s under-20 side last year. He was used in both NRL trials in Palmerston North and Rotorua.

A third player Fijian King Vuniyayawa is also close to his first NRL appearance after being named on the extended bench with utility back Hayze Perham, middle forward Leivaha Pulu and centre/second rower Taane Milne.

Captain Roger Tuivasa-Sheck, who picked up a foot injury in the Rotorua trial, is set to lead the Warriors into the 2020 season but prop Agnatius Paasi (ankle) and back rower Josh Curran (calf) haven’t been named.

In Paasi’s absence, Lachlan Burr is listed to partner veteran Leeson Ah Mau in the starting front row while new signing Wayde Egan is named as the run-on hooker in his NRL debut for the club.

The club’s 2019 NRL rookie of the year Chanel Harris-Tavita has been named to partner Blake Green in the halves with Kiwi international Kodi Nikorima on the bench along with back-up hooker Karl Lawton, set to make his NRL return from shoulder surgery. 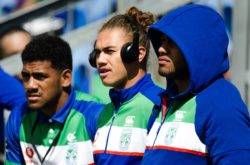