NZ Warriors Round 5 Review: Foran impresses in come from behind victory 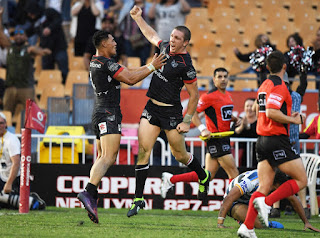 Copyright Photo : Andrew Cornaga / www.photosport.nz​
The Warriors returned home to Mount Smart Stadium after last rounds horrible performance to face the severely depleted Gold Coast Titans.
Kieran Foran finally made his debut in what was a very close encounter with the Warriors breaking their 3 match losing streak to get their second win of the season.

The Warriors started well with the forwards showing more effort this week, this flowed directly into Issac Luke’s game and after a well-timed dummy half run, Issac was able to put Shaun Johnson under the posts for the first try of the game.
The Titans fired back and took advantage of the Warriors still troubling defence with tries to Dale Copley and Daniel Vidot.
A few minutes later Kieran Foran, Shaun Johnson and Roger Tuivasa-Sheck linked up and put David Fusitua over in the corner in.
The Warriors defensive woes continued as the Titans scored back to back tries through Kane Elgey to finish the first half leading 22-12.
The Titans already ravaged by injury before the game started lost three more players during this match and the Warriors took advantage of the tiring Titans defence.
Roger Tuivasa-Sheck crossed the line early in the second half to bring the Warriors back into the game.
After an arm wrestle in the middle of the field where neither team could gain the upper hand, Kieran Foran sliced through the Titans defence and scored his first try for the Warriors, after Shaun converted the try the game was all tied up with only 20 minutes to go.
Both sides were unsuccessful with field goal attempts however Ryan Hoffman had a touch of luck when his attempt was touched by a Titan defending which gave the Warriors another set to try and take the victory.
Ryan was involved again moment later when he charged over for the match winning try in what was almost a repeat of his match winning try from Round 1, with Shaun’s conversion going over with just mere seconds remaining the Warriors walked away with the win 28-22. Copyright Photo : Renee McKay / www.photosport.nz​
My Warrior of the game goes to Issac Luke, Issac hasn't had the greatest start to the season in 2017 but with the forwards attacking the line and getting quick play the balls, he was able to take advantage with plenty of sniping runs from dummy half.
He played at a better tempo and did not let off for the entire 80 minutes and if the forwards can continue to create a platform, Issac will go from strength to strength.
If the Warriors are to succeed this season they need more performances like this from Issac. 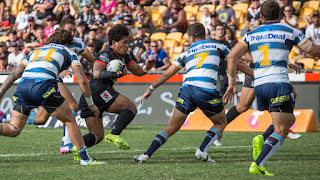 Copyright Photo: www.photosport.nz
​
My Warrior who needs to improve is Solomona Kata, Solomona has never had a great defensive game and it showed in this performance.
The thing with Kata is that what he offers on attack outweighs what he lacks defensively, however this year he has lacked the punch we have come to expect from him.
Not to mention the fact that there were two possible tries left begging when he did not pass the ball to the open Ken Maumalo, in a competition where games are so close you have to put the team before yourself and if a player is in a better situation to score you give them the ball.
I think he needs to go down to the reserve grade and find some form and learn to be a team player and let one of the reserve grade centres that have been performing so well have a chance at staking a claim on a starting first grade spot.

So, the Warriors got the win, there are still plenty of things to work on and it was against a wounded Titans side but they improved on the handling front and managed to claw back a lead and grind out the win.
The forwards delivered in this game with the prop rotation all getting 90+ metres each, Sam Lisone and James Gavet are continuing to inject themselves into the game with attitude and opening opportunities for the talented Warriors backline to strike.
Speaking of which Kieran Forans debut match was successful, he showed no rust as he directed the team around the park, his presence alone seemed to take a load off Shaun's shoulders and his play improved as a result.
In the spines debut I give it a pass but the forwards need to continue to do their bit if the spine is to play to any of their potential.
The defence needs to improve drastically, the Warriors are soft on the edges and sometimes the markers are lazy and leaving holes for opposing teams to take advantage of.
If the Warriors can tighten their defence they can be a really start to get their season on track again.
This week the Warriors face the Parramatta Eels at Mount Smart Stadium, the Eels can at times be a real threat but I feel that the Warriors will roll on from this week’s performance and get the much needed two points, so I going to pick the Warriors to win by 12.

So that was an improved Round 5 and as per usual, I will leave you with some questions.

What did you think of Kieran Forans first match for the Warriors?
Which props (If any) would you drop when Albert Vete and Ben Matulino return?
How would you fix the Warriors edge issues?
What's your score prediction against the Eels?
Reactions: koolkat and Centurion
About author

Yeah i think Gubb is losing his spot when Mutts returns, Gavet been playing to good to drop.
Toggle signature
I love to write and have the dream to become a professional Sports Journalist. Find match reviews on all the Warriors games at www.bradinger3.blogspot.com