NZ Warriors Round 24 Review: Warriors to return to Playoffs after punishing Panthers 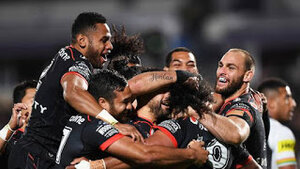 After Round 23's defeat, the Warriors made the journey home to Mount Smart Stadium to face the Penrith Panthers.

With the NRL ladder the tightest it has been for several years the Warriors needed to get the victory to secure their spot in the playoffs for the first time since 2011.

Thankfully for the large crowd in attendance, the Warriors came to play and looked a much better side than the week before, getting the much-needed win 36-16.

This was one of the better performances from the team this season, the team appears to be clicking and is finding the right time to attempt to build momentum in the lead up to the playoffs, especially with so many teams in the top eight right now suffering upset defeats.

Without Blake Green, I was worried that the Warriors would lack direction, but Shaun Johnson stepped up to plate and lead this side around the park with Mason Lino slotting in and giving yet another strong outing.

Even when the Panthers scored two tries in quick succession in the second half, a Warriors win never looked in doubt.

The difference in comparison to last week I believe was due to the improved defence and a more significant impact from the forward pack (but more on both of those below).

The key now for the Warriors is to keep their tempo up if the Warriors can play their fast style they are going to tough to beat as shown in this match where they barely looked in danger to another top-eight side desperate for a win.

This leads me to my positives from the match.

The forwards played with a lot more intensity this week.

Despite their lower than expected metre stats (only one forward ran for over 100 metres), their runs were effective, and they were able to get the quick play the balls which allowed Issac to snipe from dummy half and also let the backs to run rampant on a backpedalling Panthers defensive line.

The backs were unstoppable in this match.

The entire back line except for Mason ran for over 100 metres, and they were always threatening to break the game open.

The Warriors are one of the best-attacking backlines in this competition, and if they continue to get a good roll on from the pack, there will be plenty more points scored by this side.

As the cliche goes Defense wins Championships, and the Warriors strong goal-line defence continues to impress, the short goal line dropouts are still a great option as this game showed that if the Warriors did not regain possession, the opposition didn't have the space to create many chances to score.

If the Warriors can work on their defence in the middle of the park, then everything will be coming along nicely.

As great as this game was, it wasn't perfect which leads to my negatives.

In the first half, the Warriors were guilty of some poor last tackle options; there were several kicks from Shaun that went directly to the Panthers back three.

It may have just been a case of Shaun adjusting, and it did improve as the game progressed, but once they reach the playoffs, the Warriors will need to make every play count, I'm confident that the last tackle options will improve with the return of Blake, however.

I'm still not sold on the Interchange rotation; I feel like some players are getting too much time where others are not getting enough.

On a positive note at least this week, there wasn't a back sitting on the bench.

My last negative goes to one play by Solomona Kata.

When Kata scored his try there was an overlap for Ken Maumalo outside of him, I know he scored the try, but you should always be looking at the guaranteed play instead of boosting your individual stats.

It must be frustrating for Ken and could be a good carrot for opposition teams looking at signing the big winger to dangle in front of him (Ken if you come here you will have a centre that will feed you the ball instead of running you out of touch).

I could be in the minority, but I want to see the Warriors take advantage of any overlaps they get. Copyright Photo: Getty Images​
My Warriors of the game goes to Tohu Harris.

Tohu Harris had a strong return to the field in his first game back from injury.

With 161 metres Tohu Harris was the only forward to crack 100 metres, and with his return to the right edge, the Warriors attack was on fire once again.

Tohu Harris is the key to that right edge firing, and it will be interesting to see what Kearney does with Beale now as Hiku had a strong game outside of Tohu Harris.

If it were me, I would be replacing Kata with Beale and leaving Hiku out there, but a Beale and Harris combination could be deadly too. Copyright Photo: Getty Images​
I have no Warrior to improve this week, but I want to give shout outs to Shaun Johnson and David Fusitua.

Shaun had his best performance of the season in this match, attacking the line at will and creating opportunities for all the players around him.

When Shaun is in this kind of mood, he is one of the best players in the NRL, and the Warriors need him to be like this more often.

A running Shaun Johnson creates doubt in the opposition defensive line which in turn leads to holes that Shaun can put other players through, or he can hit that hole himself and score.

I have my fingers crossed that Shaun continues in this style for the rest of the season.

David Fusitua congratulations on 21 tries and getting back to the top of the try scorer leaderboard.

Five tries in two matches is impressive, and I believe there are still plenty more tries left in him for 2018.

I have no doubt that he is in talks to be the Dally M winger of year and is only the third Warrior to score 20 or more tries in one season (with Francis Meli and Manu Vatuvei being the other two).

The last round of the regular season is now upon us, and the Warriors get to spend it at home against the Canberra Raiders.

The Raiders are out of the playoff race, but they will be looking at ending their season on a high and have had some impressive performances in the past few weeks, so I'm expecting a tough contest.

The NRL Ladder is ridiculously tight this year and with one round remaining the Warriors could end up anywhere between second and eighth depending on how all the games end up.

I believe the Warriors still have a legitimate chance and finishing fifth or sixth and getting a home final but the Warriors can only control what happens in their game, and they will need to ensure that they come away with the win.

This game is also Simon Mannering's 300th game for the Warriors, so I expect the team to be ready for a big performance to honour one of the best players to have ever worn a Warriors jersey.

I'm predicted the Warriors to come away with a 16 point win here, I think the Warriors have started to gain momentum at the right time and will not be wanting to lose in such a special game for Simon, and I'm hoping a huge crowd is there on Friday night too.

So that was my take on a great Round 24, and as usual, I will leave you with some questions.

Who would be your centres for Round 25?

Did you have a Warrior to improve?

How confident are you in the Warriors playoff chances?

What is your score prediction for Round 24?
About author