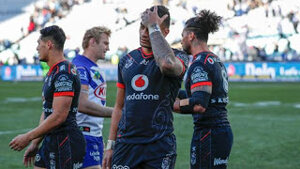 After their victory over the Knights, the Warriors made their last journey across the ditch for the regular season to face the Canterbury-Bankstown Bulldogs.

A win here would give the Warriors a potential shot at a top-four spot, but it wasn't to be as the Bulldogs got the win in a tighter than expected encounter 27-26.

What can you say about this performance from the Warriors?

Most people had the Warriors winning this game comfortably but much like the game on the Gold Coast the Warriors were out-enthused and let the opportunity pass them by.

The Warriors just seemed off the pace for the majority of the match, and while the Bulldogs were playing a simple gameplan, the Warriors could not contain them.

With the Warriors needing to play catch-up football, they needed to start playing a more expansive style, but all they brought to the party was one out runs that were reminiscent of 2017.

If you want a positive spin on the Warriors after this game, it is that the Warriors will still play in the finals unless the wheels fall off and they lose their last two games, and the Tigers manage to beat the Sea Eagles and Rabbitohs.

After this game a lot of pundits in Australia have written the Warriors off now which could work in the Warriors favour, this is a dangerous side, and when given the underdog tag this season they have responded successfully.

However, if they continue to play as they did against the Bulldogs they are not going to last so a return to form is urgently required.

There wasn't too much to praise, but I do have a few highlights which bring me to my positives from the match.

Congratulations to David Fusitua for becoming the fastest Warrior to score 50 tries after getting back to his try-scoring ways with a double.

David has had a season to remember when it comes to scoring tries, he had hit a bit of a dry spell, but hopefully this double opens the floodgates, and we see plenty more tries from him before the season is over.

My last positive is that the Warriors are finishing the regular season with two games at Mount Smart, utterly selfish positive, I just love going to live games on a Friday night.

Well, there wasn't a lot there that I could praise which leads me to my negatives.

The lack of forward momentum was a huge concern for me.

The props lacked serious punch and were bullied very easily by the Bulldogs pack, this, in turn, reduced the impact that Issac Luke had in the game with him having one of his quietest games of the season as he couldn't rush out of dummy half with his forwards continually being on the backfoot.

The forwards have shown that they can be a lot better than this so it's down to the attitude, improve that and the Warriors will back in front again.

There was very little pressure on the Bulldogs kickers, Lachlan Lewis is a great young talent, but he does not like kicking on the run so if more pressure was put on him he could have buckled.

Not to forget that there was no one was even close to him when he slotted the match-winning field goal which is inexcusable.

The Warriors last tackle options were poor with the most significant mistake coming on the Warriors the last set of the match, with the game locked up at 26 all Shaun Johnson kicked on the last direct to Will Hopoate, this lead to the Bulldogs starting there set in better field position which ultimately lead to that match-winning goal.

A kick into space or even a kick to the sideline to waste some time and go into Golden Point would have been the ideal play.

Lastly is the injuries.

The Warriors lost Blake Green in the 70th, and Gerard Beale and Shaun Johnson also had some issues.

The Warriors need all three players back for this Friday's match against the Panthers, so fingers crossed they get through this week unscathed. Copyright Photo: Getty Images​
My Warrior of the game for the third week in a row goes to Roger Tuivasa-Sheck.

Despite the team's performance Roger continues to go from strength to strength with another high metre count (273metres this match).

When many of his teammates were struggling to dent the Bulldogs defensive line, Roger was always threating to break the line.

I firmly believe he has the potential to be the Warriors first Dally M medalist this season but a strong finish to the season by Roger and the Warriors is required. 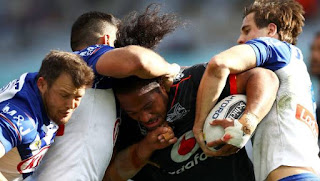 Paasi has been one of best Warriors this season, but this was his worst performance of the year with his runs barely making an impact.

I feel like he is going to bounce back (like the rest of the pack) this week and will be back to his best on Friday night.

He is head and shoulders above the rest of the props currently and will not have a poor performance two weeks in a row.

Round 24 sees the Warriors return to Mount Smart to face the Penrith Panthers.

The Panthers have lost James Maloney to injury and could possibly lose a few players to suspension due to the fight in the Panthers Round 23 match.

This does not make the Panthers match an easy win as the Panthers beat the Warriors in Round 17 without some of their stars.

If the Warriors can return to the attitude that they brought to the game against the Dragons they have a great chance to defeat the Panthers, if they show up like the did against the Bulldogs it will not be a good night for the home crowd.

I believe that Round 23 was a wake-up call for this side and they will bounce back against Penrith so im picking the Warriors to win by ten here.

It has been an exciting run to the playoffs with the ladder being so close and with the recent run of upsets the Ladder continues to be hard to predict but I feel like my preseason prediction of 7th place is going to run true for the Warriors, but we will find out in two weeks time.

So that was my take on a disappointing Round 23, and as usual, I will leave you with some questions.

Do you think this is the beginning of a Warriors slide?

Who was your Warrior to improve?

Where will the Warriors finish on the Ladder?

What is your score prediction
Reactions: Centurion
About author

Great to see Klemmer put on his butt!

One of the few highlights of an otherwise underwhelming game where we were supposed to win.